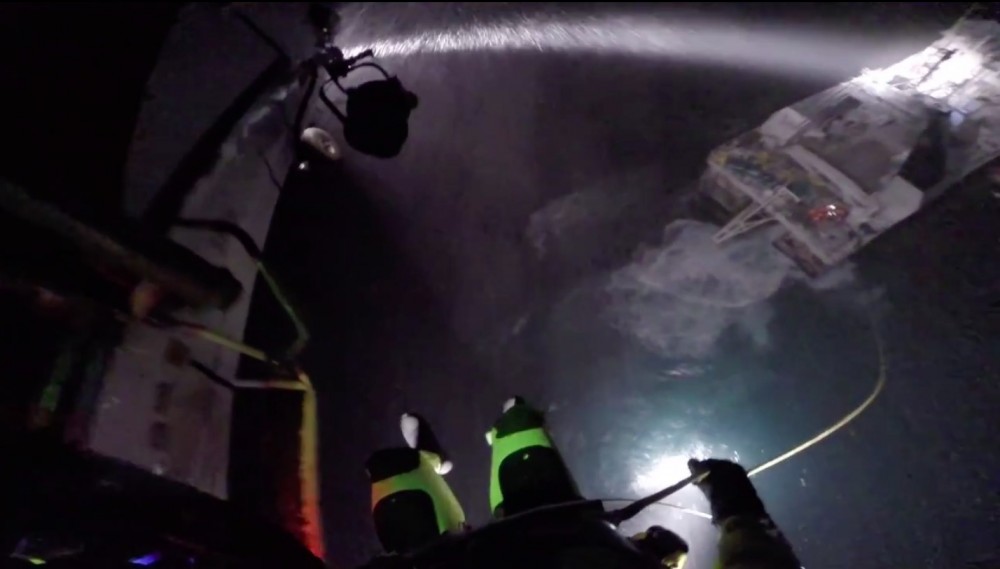 Rescue of crew from the "Northguider". Screenshot of video from JRCC/NRK

Drama in Arctic waters as trawler runs aground at Svalbard

The crew of 14 was saved, but the fate of the vessel, which has 300,000 litres of diesel oil on board, remains unclear.
Read in Russian | Читать по-русски
By

The «Northguider» and its crew of 14 was fishing in the waters north of the Svalbard archipelago when emergency hit on 28th December. The 52 meter long vessel ran aground in the Hinlopen Strait, on about 80 degrees North, and soon started to take in water.

Less than two hours after the ship captain called for help did two helicopters from the Svalbard Governor’s Office arrive on site and managed to pick up the crew.

It was a challenging rescue operation, the Joint Rescue Coordination Centre in Northern Norway informs. There was about minus 20 °C and strong winds in the area.

None of the crew members were injured. They have now all been brought safely to Longyearbyen, the administrative center on the islands.

However, there is still drama in the making with the «Northguider», which is situated in the nature reserve of the Nordaustlandet. On board is 300,000 litres of diesel oil, NRK reports.

According to local Governor Kjerstin Askholt, there is now a joint operation going on between the Coastal Administration and the Svalbard Governor’s Office on how to secure and save the vessel. Nature in the area is highly vulnerable and a leak of the diesel oil could cause serious environmental damage.

«The wrecked ship is stable in the same position as when it ran aground,» representative of the Coastal Administration Hans Petter Mortensholm says to NRK. There has not been made any observations of oil on the water.

The waters north of Svalbard are usually covered by ice at this time of year.

The Norwegian Coast Guard vessel «Svalbard» is now on its way towards the site of the accident. The ship on Sunday set out from Sortland and on Monday morning sailed north of Tromsø, ship tracking data show.

The «Svalbard» has icebreaker capacities and is well suited for operations in the far northern waters. From before, the smaller patrol vessel «Barentshav» is in the waters south of the archipelago.

Experts from the «Svalbard» will try to make it onboard the wrecked ship to assess damage, and subsequently try to empty the diesel oil tanks. If possible, the ship will be pulled off the ground and towed to safe harbour, NRK reports.