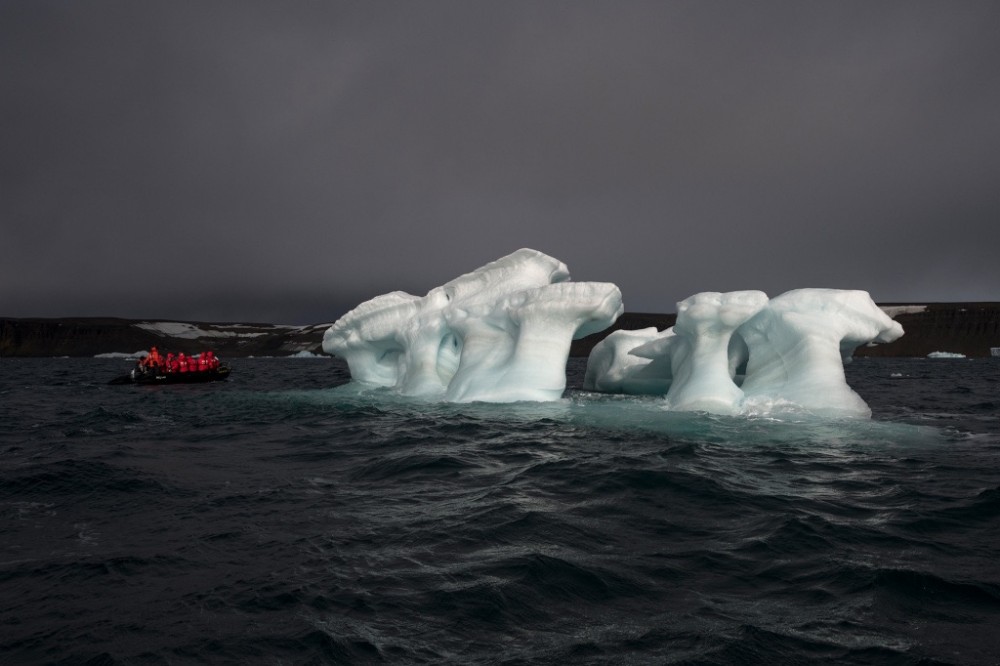 No signs of the Perlamutrovy island, researchers say. Photo: Ministry of Natural Resources

It was discovered in the early 20th century and has since been part of all maps of the Arctic. But now the island of Perlamutrovy has simply vanished.
Read in Russian | Читать по-русски
By

The island was located near the Graham Bell island in Franz Josef Land, the remote Russian Arctic archipelago, and had a name that means «the mother of pearls».

It had a round shape and a diameter of 1,5 km. Its highest point was 22 meter above sea level. And it was all covered by a glacier.

That is now all history. The island of Perlamutrovy is simply gone, and nobody seems to know exactly what has happened.

Russian researchers suspected the disappearance in 2017 when they failed to discover it on satellite photos. In summer of 2018, hydrographers from the Russian Northern Fleet during an expedition confirmed that the island is gone.

On the site is now only open water, the researchers make clear.

It is very important to understand the reasons why the island has disappeared, says Aleksandr Kiriolov, director of the Russian Arktika National Park.

He is confident that it is related with the rapid climate changes in the area.

«On the [near by] island of Graham-Bell we see processes of coastal erosion, and perhaps the small neighbouring island was washed away, that the currents changed and the sea floor came into motion, that it became a so-called «walking» island,» he says.

It is not the only remarkable geological change that now is unfolding in Franz Josef Land, the researcher makes clear.

Over the last couple of years, several new islands have been found in the area. Only in the course of the expeditions organised by the Northern Fleet, a total of 12 new islands, one new strait, 14 new head lands and six bays have been discovered, the Russian Ministry of Natural Resources informs.

It is a natural phenomenon, national park director Kirilov argues.

«For the Arctic, this kind of disappearance and appearance of islands is a natural process, it is related to climate change on the planet,» he says.

«There are many new findings made as the glaciers disappear, [and] it is quite likely that the outlines of the Franz Josef Land actually are far from the ones that are depicted on maps,» Kirilov says.

The Franz Josef Land is located in the northern part of the Barents Sea, an area which is experiencing some of the biggest climate changes on the planet. Average temperatures in the area has hiked in only few years.

According to Roshydromet, the Russian meteorological institute, the nearby Kara Sea has over the last 30 years experienced an average air temperature increase of as much as 4,95 C degrees.

A similar warming is unfolding in the sea.

A research paper published last summer that shows how the northern Barents Sea is about to shift from an Arctic to an Atlantic climate.

«We see a similar atlantification of the sea to the north and east of Svalbard; less sea ice in the Arctic Ocean leads to less melt-water and thus the warm Atlantic water remains atop the water column for most of the year, staying entirely on the surface. It provides a larger ice-free area north of the Svalbard Archipelago and thinner ice further to the east,» quotes Arild Sundfjord, an oceanographer at the Norwegian Polar Institute.