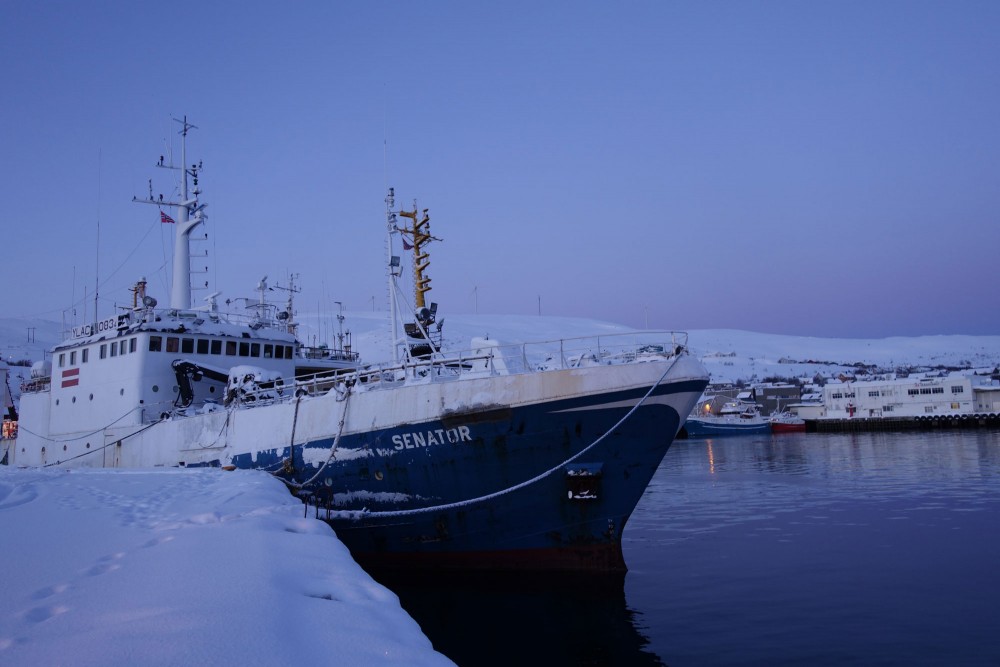 Latvian trawler "Senator" moored in Båtsfjord, Norway, has not been to sea since it was arrested in 2017. Photo: Atle Staalesen

The Svalbard Treaty does not prevent Norway from punishing companies that engage in catch without permission, the judges say.
Read in Russian | Читать по-русски
By

The Norwegian Supreme Court on Thursday concluded that snow crab is a so-called sedentary species and that Norwegian authorities consequently have exclusive rights to manage the crab stocks in the waters around the Arctic archipelago of Svalbard.

With their verdict, the judges turn down an appeal submitted by Latvian company SIA North Star Ltd. and one of its Russian ship captains.

The company was taken to court after one of its trawlers, the «Senator», in January 2017 engaged in snow crab fishing in the so-called Fishery Protection Zone around Svalbard. The trawler was arrested by the Norwegian Coast Guard as it was putting 2,600 crab catch traps to sea. The captain refused to pick them up when requested to do so by the Norwegian Coast Guard arguing that he had the permissions he needed from EU authorities.

The company in June 2017 lost its case in a lower court and subsequently appealed the case to the Supreme Court. It will now have to pay 1.3 million kroner in fines.

The case was given special priority by the Supreme Court and all the court’s 11 judges took part in the assessment. The verdict was unanimous, the court says in an announcement.

The sedentary character of the crab means that it considered part of the sea bottom, and it was believed that the court decision could potentially have affected also rights over oil gas resources in the area.