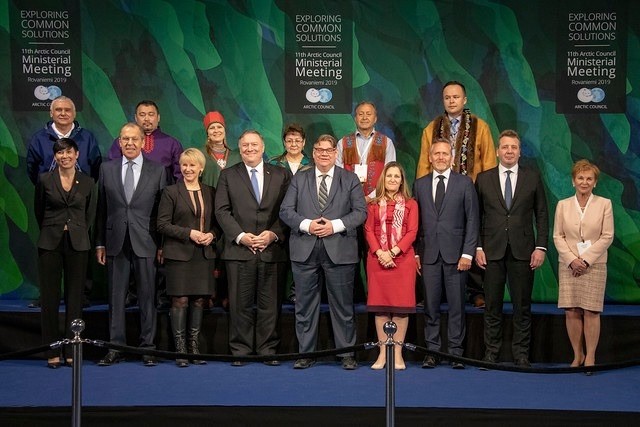 Members of the Arctic Council. Photo: US. State Department

For the first time in history, an Arctic Council ministerial ended without a joint declaration from the Arctic states, capping off weeks of reports that the document was in jeopardy because of U.S. stonewalling on using climate language in the final document.
Read in Russian | Читать по-русски
By

Instead, a one-page Joint Ministerial Statement was released where the Arctic nations pledged a commitment to the “[…] well-being of the inhabitants of the Arctic, to sustainable development and to the protection of the Arctic environment,” but that made no mention of climate change or the Paris climate agreement.

Over a dozen members of the Arctic Indigenous organizations and various Arctic state delegations confirmed to Eye on the Arctic it was because of U.S. objections.

The Arctic Council is an intergovernmental forum run on consensus and made up of the eight northern nations, including Canada, and six Arctic Indigenous groups, known as permanent participants. On Tuesday, Finland handed the two-year rotating chairmanship of the organization over to Iceland.

Finland’s Foreign Minister Timo Soini wouldn’t mention the U.S. by name when speaking to the press after the ministerial, but said negotiations went down to the wire Tuesday morning before an agreement was reached on a compromise statement, two and a half hours before the plenary opened.

“It is clear that climate issues (are viewed) differently from the different capitals, that cannot be denied,” Soini said a news conference. “But the joint ministerial statement it is also very important to show that the eight foreign ministers can agree on some core issues.

“All the problems and disagreements can’t be solved in the one ministerial, but the main thing is everybody was here… The result could have been much worse.”

During her address at Tuesday’s ministerial meeting, Canada’s Foreign Minister Chrystia Freeland was mum on the declaration upset, but stressed the importance of working with Indigenous peoples on environmental questions.

“We must all draw on the wisdom and experience of the six Indigenous permanent participant organizations here today to help us build resilience to climate change to protect the North,” Freeland said, announcing increased funding of up to $10 million for continued participation of Canadian Indigenous groups in the Arctic Council.

Global Affairs Canada and the office of Canada’s Foreign Minister did not respond to requests for comment on the lack of declaration at the ministerial.

Only Sweden’s Foreign Minister Margot Wallstrom, and the majority of the Arctic Council’s six Indigenous organizations addressed the upset head-on in their speeches.

Canadian Bill Erasmus, chair of the Arctic Athabaskan Council, which represents American and Canadian Athabaskan First Nations governments, minced no words during his speech at the ministerial over the lack of a declaration.

“The permanent participants usually have the opportunity to fully participate in the drafting and development of an Arctic Council declaration where our views are fully endorsed and part of the bigger picture,” Erasmus said in his remarks, describing the statement, done without Indigenous participation, as “[…] not the common practice of the Arctic Council.”

In an interview with Eye on the Arctic after the meeting, Erasmus said he was “disappointed” and “concerned” with the outcome of the meeting.

“(The statement ) doesn’t go far enough and it’s not from us,” he said. “We’re in a crisis situation. (Climate change) is real. And it’s man made. And it can be prevented.

“We all have responsibilities and we have to have a committed effort so young people can have a future.”

The Arctic Council’s mandate is to discuss sustainable development and environmental protection in the North. Discussion of military and security issues are specifically excluded from its mandate, something that’s largely protected the forum from political tensions elsewhere in the world and allowed it to focus on common Arctic issues.

The countries meet biennially to take stock, transfer the rotating two-year chairmanship, and to sign a declaration that establishes their priorities for the next two years.

Typically a sleepy, ceremonious affair, the U.S. played spoiler in the run-up to this year’s ministerial, not only by scuttling the declaration but also by a last-minute Arctic policy speech given in Rovaniemi Monday night on the sidelines of the ministerial, where U.S. Secretary of State Mike Pompeo took shots at the Arctic policies of everyone from China, to Arctic Council members Canada and Russia.

The U.S. has been at odds with the rest of the Arctic community over climate issues since President Trump announced his country’s withdrawal from the Paris climate deal in 2017, a move blasted by other Arctic Council member states and something that continues to be sticking point in bilateral meetings with Arctic Council nations.

Timo Koivurova, director and research professor at the Arctic Centre at Finland’s University of Lapland and an Arctic Council expert, said he believes in the resilience of the forum but that the environmental policy of U.S. President Donald Trump means there could be rocky times ahead for international Arctic community.

“The majority of work in the Arctic Council stems either directly or indirectly from climate change, and if the U.S. doesn’t even want to have references to climate change in the declaration, that’s going to mean very difficult years ahead.”

Iceland’s Foreign Minister Gudlaugur Thor Thordarson acknowledged the country was taking over the forum’s leadership at a turbulent time, but said it wouldn’t interfere with Iceland’s chairmanship focus on the marine environment, green energy, the people of the Arctic and strengthening of the forum.

“This is a big challenge, a big task… Many fields will take a lot of effort but it’s definitely worth it.”