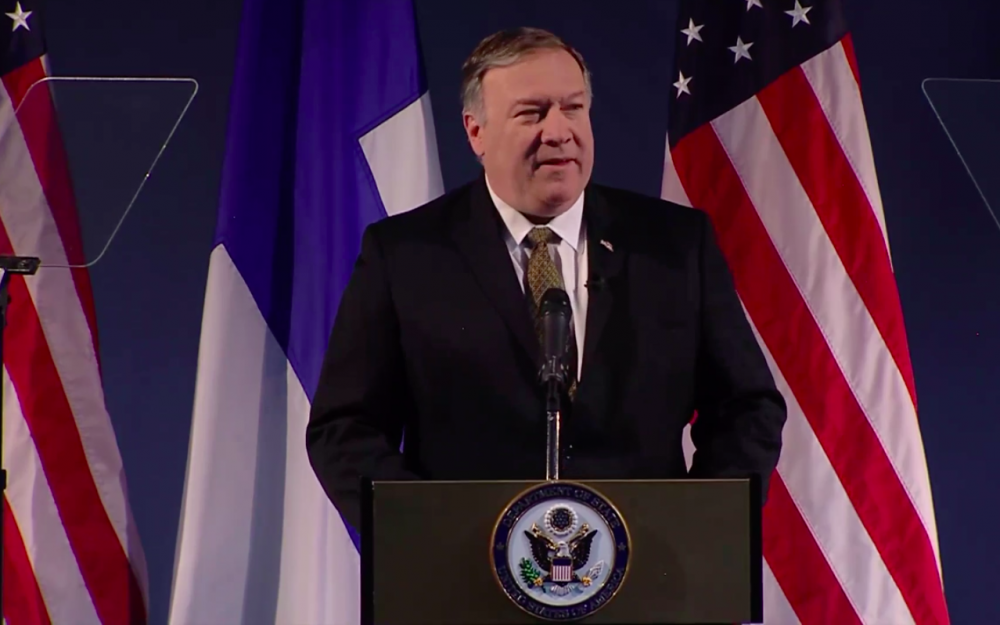 U.S. Secretary of State Mike Pompeo stunned onlookers Monday by tongue-lashing China and Russia during an Arctic policy speech on the eve of the Arctic Council ministerial.
Read in Russian | Читать по-русски
By

“China’s words and actions raise doubts about its intentions,” Pompeo said to a packed audience mostly made up of Arctic Council delegates at Rovaniemi’s Lappi Areena.

“Beijing claims to be a near-Arctic state,” Pompeo said refrencing China’s 2018 white paper on the Arctic. “Yet the shortest distance between China and the Arctic is 900 miles. There are Arctic states, and non-Arctic states. No third category exists. China claiming otherwise entitles them to exactly nothing.”

China has been an Arctic Council observer country since 2013 . But its Arctic ambitions garnered worldwide attention last year with its policy document that laid out the country’s plans for massive investments and infrastructure projects in the North, establishing a so-called ‘Polar Silk Road.’

Pompeo said the U.S. welcomes Chinese investment in the Arctic but that the U.S. needed to “examine these activities closely,” citing a U.S. Defense Department report on May 2 that said civilian research could support a strengthened Chinese military presence in the Arctic Ocean, which could include deploying submarines to the region as a deterrent against nuclear attack.”

Pompeo, along with the foreign ministers of the seven other Arctic nations: Canada, Denmark, Finland, Iceland, Norway, Sweden and Russia; are gathered in Rovaniemi this week for the eleventh Arctic Council ministerial meeting.

The intergovernmental forum is made up of the eight northern nations and six Arctic Indigenous groups, and its mandate is to discuss sustainable development and environmental protection in the North.The countries meet biennially to transfer the rotating chairmanship and sign a declaration that establishes their priorities for the next two years. On Tuesday, Finland hands the chairmanship to Iceland.

Military and security issues have been explicitly excluded from the Arctic Council since its founding, but Pompeo, after discussing China, also singled out Russia in his speech, citing the Ukraine crisis and Russia’s reopening of military bases in the North, as activity increases along the Northern Sea Route.

“We’re concerned about Russia’s claim over the international waters of the Northern Sea Route, including its newly announced plans to connect it with China’s Maritime Silk Road,” he said.

“We recognize Russia is not the only country making illegitimate claims,” he said referring to Canada.

Recasting the U.S as a team player?

Pompeo’s comments came at the same time he sought to recast the U.S. as a team player in circumpolar affairs despite weeks of lambasting by a procession of Arctic officials for the country’s stonewalling on climate language in the Arctic Council’s upcoming Rovaniemi Declaration.

In the weeks leading up to the Rovaniemi ministerial, everyone from Russia’s Foreign Minister Sergey Lavrov, to officials from other Arctic states, have become increasingly vocal concerning U.S. efforts to remove mentions of climate change and the Paris climate agreement from the final declaration expected to be signed on Tuesday.

President Trump withdrew the U.S. from the Paris climate deal in 2017, a move blasted by other Arctic Council member states and something that continues to be sticking point  in bilateral meetings with Arctic Council nations.

Pompeo didn’t mention climate change in his speech but tried to burnish the U.S.’s environmental bonafides in the Arctic citing its involvement in everything from the signing the 2018 moratorium on fishing in the Central Arctic Ocean  to its reduction of black carbon emissions by 16 percent since 2013, something Pompeo described as “the best of any Arctic country” done at the same time “it isn’t clear Russia is reducing emissions at all” and that “China’s CO2 emissions tripled between 2000 and 2016.”

Gao Feng, China’s special representative for the Arctic and head of the Chinese delegation at the Arctic Council ministerial, said the speech left him floored.

“The business of the  Arctic Council is cooperation, environmental protection, friendly consultation and the sharing and exchange of views. This is completely different now,” he said shaking his head  as he talked to reporters. “And talking to the biggest Arctic Council nation, Russia, like that? I can’t find a good word (in English) to describe it.

Lassi Heininen, Research Director at Finland’s University of Helsinki, said the content and timing of the speech were unherd of at Arctic Council ministerial meetings, where traditionally, no one state or minister tries to “steal the show.”

“What has happened that he has to act so aggressively towards China and Russia?,” Heininen said. “(Because) even when there are turbulence or uncertainties, the Arctic Council says ‘let’s keep this out’ because we have certain common interests, to have some solid ground. Particularly, this is just the day before the ministerial where (typically) all the parties have respected having a good mood and spirit here because of common interests.

“Maybe this is the Trump administration’s way to show their foreign policy? But is there a need for that? What is the need? What are you aiming to gain?

“I hope that this will not open a new kind of use of the Arctic Council, or mis-use of it, for other purposes.”