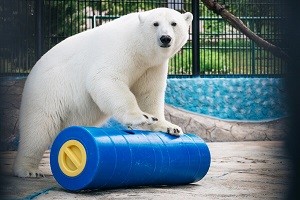 The plastic plaything is aimed to prevent the animals from going nuts in captivity.
Read in Russian | Читать по-русски
By

You might have seen one in zoo and wonder how on earth the King of the Arctic can survive behind bars in a hot zoo in summer.

In Russia, there are now polar bears in all 16 zoos throughout the country. All are under care of Rosneft, Russia’s largest oil company and the most active driller in Arctic areas.

“Rosneft provides for the maintenance, full feeding, veterinary services and enrichment of the habitat of 35 polar bears,” the company informs.

The polar bear program of the oil company include “animal custody in all Russian zoos” and “the rescue and rehabilitation of orphaned young bears,” a company press release reads.

To make life better for the polar bears in captivity, or as Rosneft puts it: “helps to reduce the development of stereotypical behaviour,” special toys are developed for the animals to play with.

Made of environmental friendly durable plastic, an oil barrel-looking blue cylinder and a collapsible ball are developed.

Sanctions-hit Rosneft makes a point that the cost of creating the toys turned out to be 3-times lower than foreign analogues with comparable quality.”

The company says the plastic toys are developed after analysing polar bear habitats in zoos and the design of the products ensure their durability, resistance to mechanical stress, ultraviolet radiation and temperature changes.

By the end of July, the first batch of toys will be delivered to the zoo in Krasnoyarsk, where polar bears rescued from Norilsk and Dikson are kept.

In June this year, a 200-kilograms bear was captured in Norilsk after it came close to a garbage dump searching for food. Rosneft paid for veterinarian treatment and transport to the Krasnoyarsk zoo 1,500 kilometres further south in Siberia.

Last year, a polar bear cub was rescued by Rosneft in Russia’s northernmost town Dikson and taken to Krasnoyarsk. The cub was named Ursula.

Both Norilsk and Dikson are located on the Taimyr Peninsula, of which the northern shores are a natural habitat for polar bears in the Russian Arctic in winter and spring.

Rosneft has since 2013 supported polar bear research in the Russian Arctic, including several scientific expeditions.

Igor Sechin, one leading player of the Kremlin’s Silovki faction and one of President Vladimir Putin’s closest allies, heads Rosneft.

Putin himself has shown strong support for the protection of polar bears and the Kremlin has a dedicated portal for its polar bear programme.

In the circumpolar Arctic, the polar bear population is estimated to be between 22,000 and 31,000 animals.