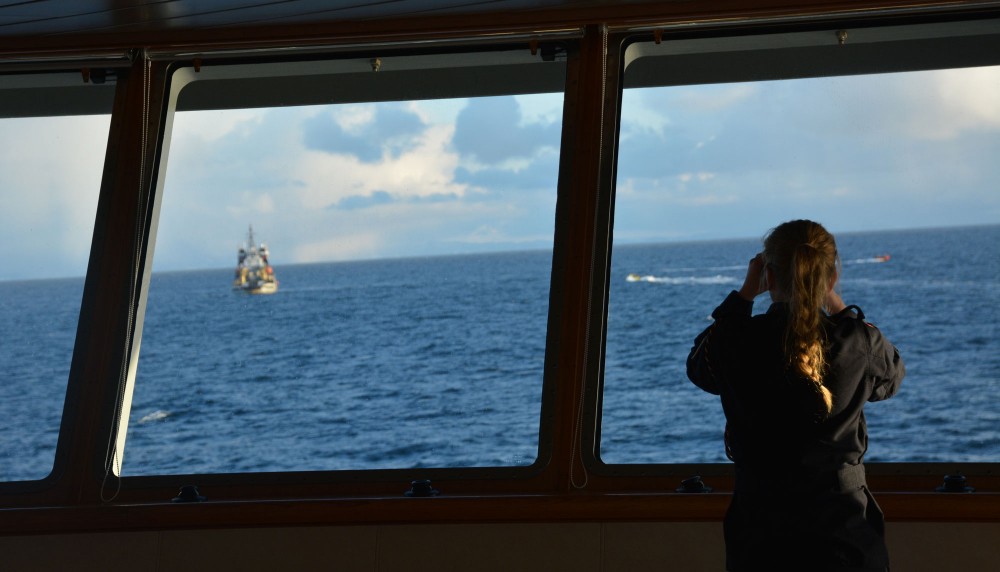 But the number of ships that set course for the Arctic route still remains low.
Read in Russian | Читать по-русски
By

The Arctic shortcut that connects Asia and Europe is open and ice-free and shipping appears smooth, also for vessels without ice class standards.

The last pieces of frozen water vanished in mid-August and ice-data shows that the whole route now is free of ice. That includes the East Siberian Sea, the area that normally has the longest-lasting white sheet.

The period August-October is peak season for Arctic shipments. But the number of ships in the area still remains low.

Figures from Russia’s Northern Sea Route Administration shows that a total of 94 vessels in the last week of August were sailing in the waters between the Bering Strait and the archipelago of Novaya Zemlya.

The vast majority of the ships are on the western part of the route, in areas where ice vanished already in July. Only about 30 vessels were located in waters east of the Kara Sea.

Of the vessels now sailing on the more than 5,500 km long sea route are about 20 tankers, several of them bringing oil from the terminal of Novy Port, others are LNG carriers serving the Yamal LNG.

The latter includes the «Nikolay Urvantsev», the brand new ship that is on its maiden trip through the Russian Arctic waters. The 299 meter long ship with ice class standard Arc7 was this July officially handed over by Korean shipyard Daewoo Shipbuilding & Marine Engineering to owner Mitsui O.S.K. Lines.

The «Nikolay Urvantsev» is part of a fleet of 15 LNG carriers that by the end of 2019 will shuttle to and from the Sabetta terminal in peninsula Yamal. Two other new carriers, the «Vladimir Voronin» and «Nikolay Yevgenov», made similar maiden trips earlier this summer.

The Northern Sea Route is top priority for the Kremlin and President Putin has made clear that he wants annual shipments on the route to reach 80 million tons in year 2024.

In 2018, shipments amounted to about 20 million tons, and estimates from the Ministry of Natural Resources indicate a total of 30 million tons by the end of 2019.

The lion’s share of the shipments is liquefied natural gas from Novatek’s Yamal LNG plant, while only a minor part is shipped transit across the route.

However, despite the rapidly growing volumes, the number of shipping companies that plan to move ships into the area remains low. According to the Northern Sea Route Administration, a total of 662 vessels by late August had requested sailing permission on the NSR, which is on the level of last year. In the course of 2018, a total of 808 ships applied for permission and in the previous five years, the number ranged between 660-730.

Furthermore, only a limited part of the ships now sailing on the route actually carry goods. The official NSR list of vessels shows that almost half are tugs and support and service vessels, most of which are involved in oil and gas-related activities. They either assist in the ongoing well drilling operations of rigs “Arkticheskaya”, “Amazon” and “Nan Hai Bao Hai”, or engage in operations related to the Yamal LNG and the Sabetta sea terminal.

Developments on the Northern Sea Route are closely connected with current dramatic climate changes in the area. Year 2019 is about to become the warmest on record and ice melting is reaching unprecedented levels.

According to the National Snow & Ice Date Center, Arctic sea ice extent is this year close to the level of 2012, the year with the lowest minimum in the satellite record.

Mapping from the Center shows that sea ice retreat in the first half of August was mainly in an area of patchy sea ice in the East Siberian Sea and along the ice edge in the northern Beaufort and Chukchi Seas.

The retreating ice is accompanied by high air temperatures. Over the first half of August, air temperatures along the Siberian coast were generally 2 to 7 degrees Celsius above the 1981 to 2010 average.