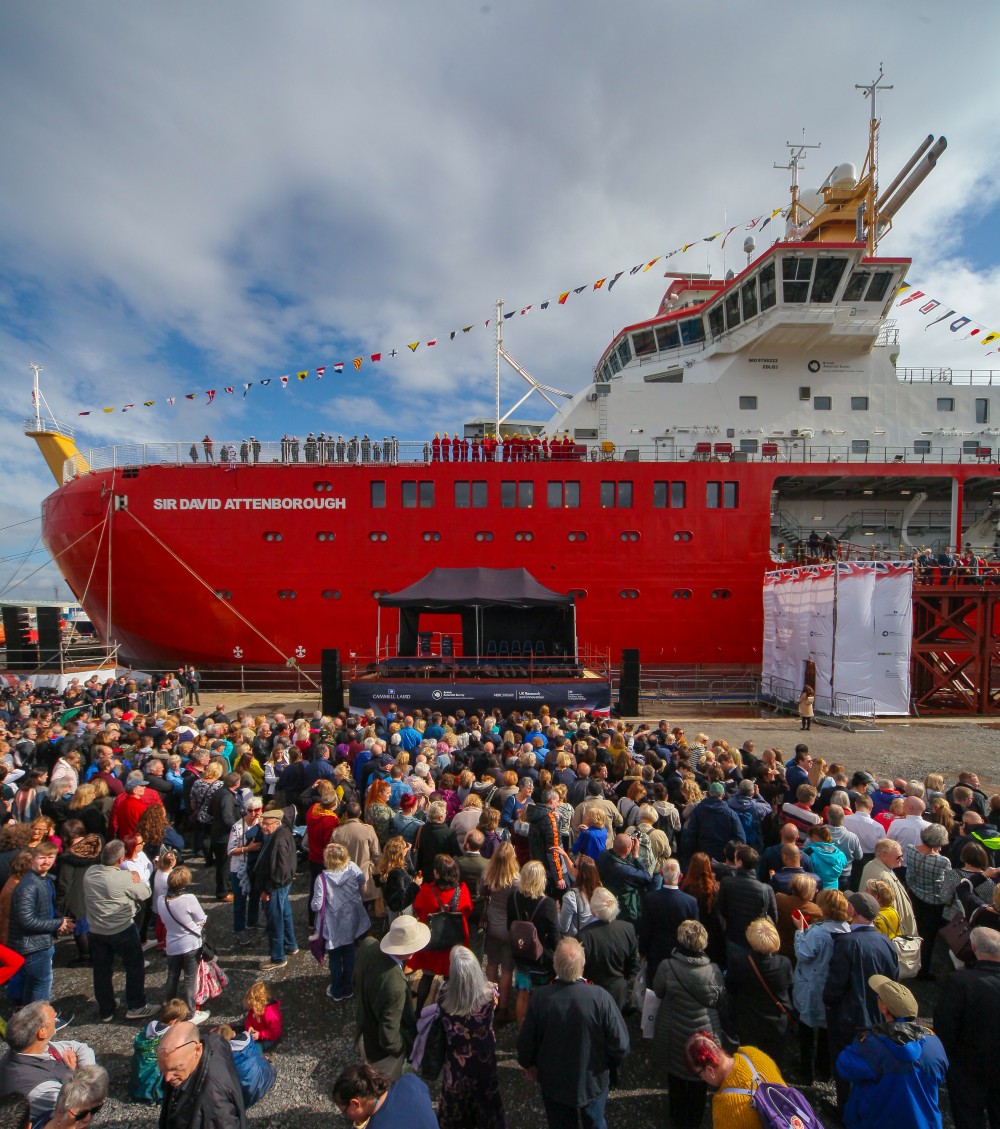 A bottle of champagne was smashed against the hull of "Sir David Attenborough" Arctic research vessel on September 26th. Photo: British Antarctic Survey

The United Kingdom’s new polar research ship was formally named RRS Sir David Attenborough on Thursday by the Duke and Duchess of Cambridge, becoming the flagship of British Arctic and Antarctic research.
Read in Russian | Читать по-русски
By

Designed to replace the country’s other two polar vessels, the Attenborough will help expand global knowledge of the polar oceans and the impact of climate change on them, Prince William, grandson of Queen Elizabeth, said in his speech.

Commissioned by the Natural Environment Research Council (NERC), the vessel is part of a larger government programme of investment in polar infrastructure (a total of £300 million, nearly CAD$490 million) to help the United Kingdom continue its research in Antarctica and the Arctic.

“This is an incredibly exciting moment in our scientific history. The RRS Sir David Attenborough will allow us to make a major leap forward in our understanding of the environment”, said UK’s Science Minister Chris Skidmore.

The naming ceremony, which lasts three days, is held at a shipyard in Birkenhead, northwest England, where the giant icebreaker was built, to inspire and inform people about polar science, engineering and technology – and why it matters in everyday life, the news release says.

Sir David Attenborough, who is known for his nature documentaries, stresses the importance of such ships in understanding and mitigating the effects of climate change.

“We all need this ship. Our world is changing and it’s clear that people around the world – especially the young – are becoming more and more concerned about a climate catastrophe”, Attenbourough said. “But human beings are resilient and skilful. If we pay attention to the scientific knowledge that those who will sail in this ship will gather, then we will stand a much better chance of finding a way to deal with what lies ahead.”

The launch of the Attenborough comes following the publication of the Intergovernmental Panel on Climate Change’s (IPCC) Special Report on the Earth’s oceans and frozen regions released Wednesday.

This document highlights how climate change in the world’s polar regions is affecting all corners of the globe and how urgent action is needed to slow the catastrophic changes in the world’s ice and oceans.

One ship to replace two others

The British Antarctic Survey (BAS), which operates the Attenborough, used to have two ships in its research fleet.

The RRS Ernest Shackleton served as a logistics vessel to transport cargo, fuel and people. It is also equipped with basic scientific equipment to undertake research work. Leased by the BAS for 20 years, the vessel was returned to its original owners in April.

The UK still owns the RRS James Clark Ross, a marine research vessel which carries out biological, oceanographic and geophysical cruises, but not for long. The Clark Ross is nearing the end of its 25-year lifespan, the BAS said on its website.

Without these two ships, the UK government needed a new, modern platform to conduct polar research. This is why they decided to build the RRS Sir David Attenbourough, believing it could fulfil the tasks of both the earlier vessels – in research and in logistics.

“The RRS Sir David Attenborough is one of the most advanced polar research vessels in the world and will transform how ship-borne science is conducted in the Polar Regions. It will provide scientists with state-of-the-art facilities to undertake crucial research into the impact of global change on our oceans, marine biodiversity and climate, and ensure that the UK remains at the forefront of polar science”, said Sir Mark Walport, chief executive of UK Research and Innovation in a news release.

The Attenborough should be able to plough through 1 m thick sea ice at three knots (3.5mph/5.5km/h) and is designed to carry out scientific work in extreme environments.

The ship operates a wide range of specialist scientific facilities, instruments and laboratories that will enable researchers to study the ocean, the seabed as well as the atmosphere.

Equipped with a heliport, cranes and on-board laboratories, it can also deploy submarines and other ocean monitoring and sampling equipment.

The Attenborough will also be the first British polar research ship to feature a “moon pool”, says the BAS. This is a large hole running through the vessel and open to both the air (at deck level) and sea (at the hull), allowing instruments to be lowered into and out of the sea easily and safely when weather or thick sea-ice conditions would normally make such work difficult.

The ship is also very quiet so that marine creatures do not get frightened, allowing scientists on board to study them.

Ice trials in the northern hemisphere are planned from March 2020, followed by a science rehearsal cruise from August 2020. It is scheduled to be fully operational from October next year.