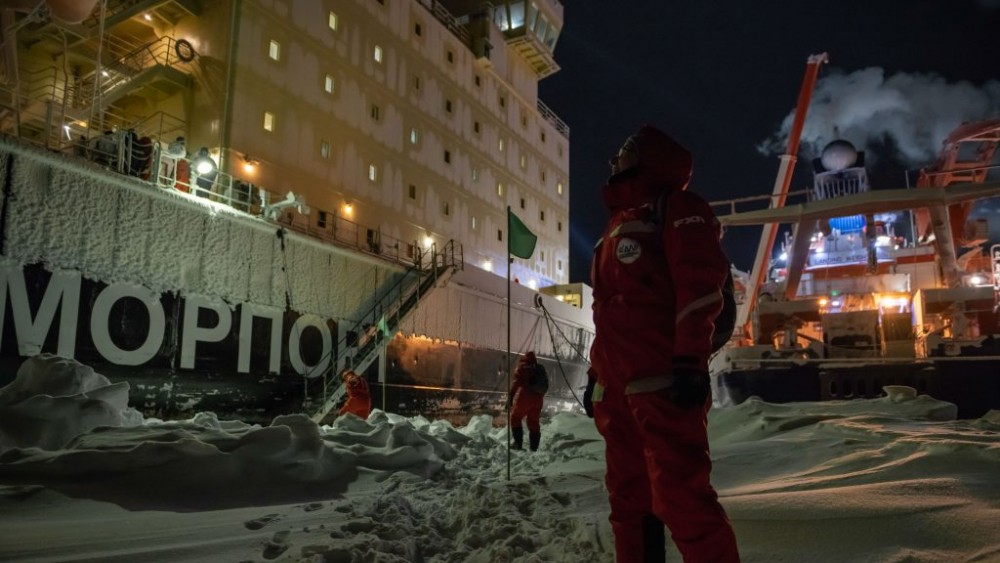 A scientific team and crew on the second leg of the scientific expedition visit Polarstern after arriving at the MOSAiC ice floe this week. Photo: Esther Horvath/AWI

The Multidisciplinary drifting Observatory for the Study of Arctic Climate (MOSAiC) expedition was launched on the RV Polarstern in October in the Siberian region of the Arctic to study climate systems in the Central Arctic. The project is led by the Alfred Wegener Institute, Helmholtz Centre for Polar and Marine Research (AWI).

The icebreaker will drift with the sea ice in the Central Arctic for one year until the expedition wraps up in 2020.

Icebreakers from Russia, China and Sweden will resupply the expedition during the year, including both fuel and exchanging personnel as happened this week.

“The first phase of the expedition wasn’t easy,” said Markus Rex, MOSAiC expedition leader from AWI in a news release this week.

“The ice, at less than a metre, is unusually thin, highly dynamic and constantly in motion. We very often saw new cracks and channels in the ice, or the formation of several-metre-tall pack ice hummocks: jagged piles of ice, formed when rising pressures cause the ice floes to press against one another and stack up. The force of this crashing ice impressively demonstrates the power of nature, in whose hands we now find ourselves. In addition, newly formed hummocks often buried our equipment, which we then had to retrieve and set up all over again – not to mention the cracks in the ice, which are dangerous for the team and instruments alike.”

During the five-day crew handover, the new MOSAiC team was briefed on everything from the upcoming working conditions to polar bear safety on research sites.

“A major challenge for us ‘newbies’ is the fact that we’re now on an ice floe that we’ve never seen by the light of day, and as a result, we have no idea where we actually are,” Christian Haas, a sea-ice geophysicist at the AWI and leader for the second leg of the expedition, said in the news release. “So we have to learn how to perceive our surroundings using means other than our eyes.”

This week’s handover between the Polarstern to the  Kapitan Dranitsyn was completed on Wednesday at 12:30 CET.

The budget for the project is 140 million euros.

More than 300 experts from 16 different countries, including Canada, will work on the Polarstern at some point during the expedition.

As of Thursday, the expedition was currently approximately 270 km from the North Pole.

The Polarstern can be tracked in real time on the MOSAiC web app.