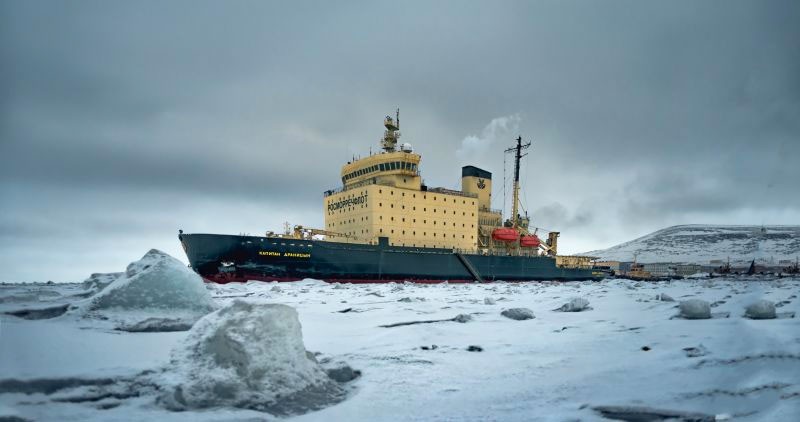 The «Kapitan Dranitsyn» is bringing equipment, supplies and 95 researchers to the «Polarstern» as part of great international research expedition MOSAiC.
Read in Russian | Читать по-русски
By

The 129 meter long Russian icebreaker on 27th November set out from Tromsø, Norway, with course for icy waters near the North Pole. It is expected to arrive to the site of the «Polarstern» by mid-December.

On board the «Kapitan Dranitsyn» are loads of research equipment, supplies, as well as 95 researchers that are to swap places with the people currently onboard the «Polarstern».

The Russian ship has recently undergone a major upgrade that includes the installment of new navigation equipment, Russian port management company Rosmorport informs. The sailing to the «Polarstern» and back to Tromsø is expected to last about six weeks. It is the first of the ship’s two visits to the «Polarstern» in the course of the MOSAiC.

At the helm of the ship is Captain Aleksandr Yerpulev, the sailor with more than 35 years of experience from a number of complicated Arctic icebreaker voyages.

As the «Kapitan Dranitsyn» sails through the Barents Sea a dramatic situation is unfolding with another Arctic expedition. On 82 degrees north in waters north of Svalbard, explorers Berge Ousland and Mike Horn are struggling to make their way back from the North Pole.

Potentially, the «Kapitan Dranitsyn» could come to the rescue of the two explorers should their situation get critical. Norwegian research ship «Lance» is in the area to assist the two men, but this morning got stuck in the ice, VG reported.

The German research vessel is now located at about 86 degrees North.

The ship, a German-built icebreaker operated by the Alfred Wegener Institute for Polar and Marine Research (AWI), in early October this year sailed deep into the ice and has subsequently drifted with the ice.

Four icebreakers from Russia, Sweden and China will assist the «Polarstern» in the course of the year. Among them will the new Chinese icebreaker «Xue Long 2». In spring 2020, a landing strip will be built on the Arctic ice, to serve German research aircrafts Polar 5 and Polar 6.