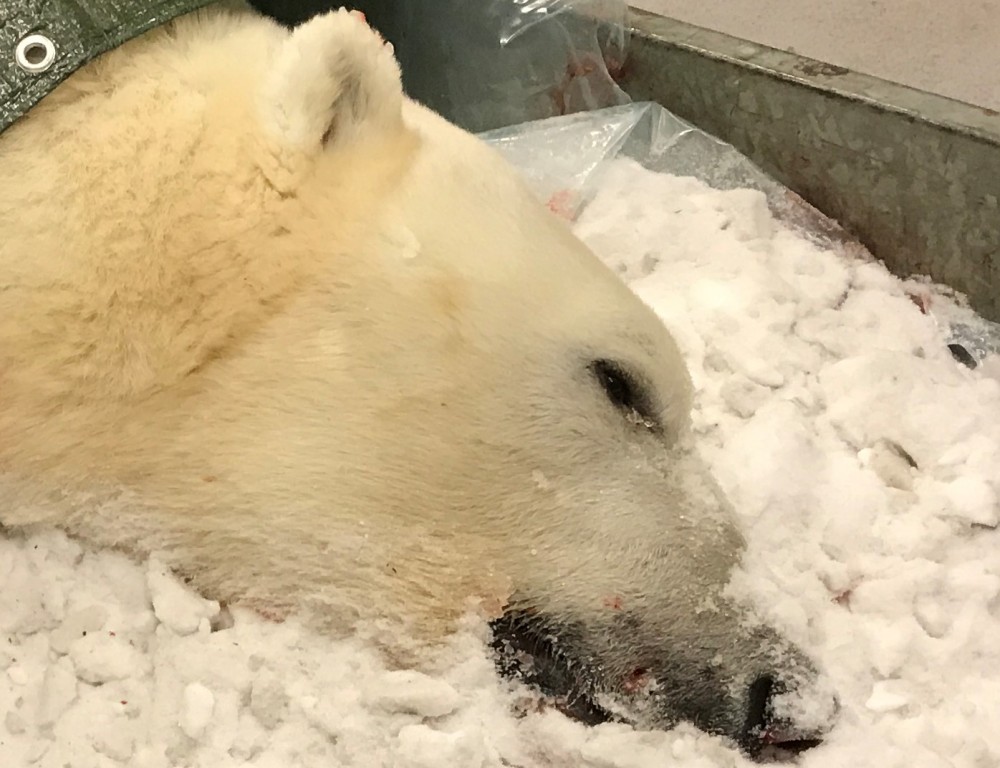 The bear was killed on New Year’s night after multiple visits over the last few days in the settlement of Longyearbyen on Svalbard.
Read in Russian | Читать по-русски
By

The killing sparks strong reactions from Morten Jørgensen, author of the book, “Polar Bears on the edge – Heading for Extinction while Management Fails.”

“If a human community in the Arctic cannot handle the presence of one single polar bear without panicking and ultimately resorting to killing, that demonstrates that the attitude of the human presence is rotten at the core,” Jørgensen says to the Barents Observer.

The Governor of Svalbard, Kjerstin Askholt, said in a statement that the polar bear was not killed because of an emergency situation, but because he “in recent days had shown a very special behaviour in relation to stray into the settlement of Longyearbyen and thus pose a danger to people in the town.”

She informs that the Governor‘s people, who are the local police authority, made several attempts to solve the situation after the bear first time walked in to Longyearbyen on December 26th, but without success.

With polar night, around the clock darkness, the Governor found it very difficult to keep watch of the bear. “We have no personnel resources to keep the population safe 24 hours a day,” Askholt explained.

The polar bear was shot at 4 am on January 1st.

Last week, the bear made headlines in Norwegian media as a local posted a video on social media showing the bear walking through the centre of Longyearbyen, making a stop outside the local pub and watched through the window, before slowly continuing down the pedestrian street.

Police Chief Superintendent Ole Jakob Malmo says to the Barents Observer that the bear had not shown any aggression but sought garbage containers in Longyearbyen.

“In general, you can say that polar bears are always looking for food and pose a great risk to people’s safety when entering a settlement as this one did multiple times,” Malmo tells and underlines:

“A polar bear is a very dangerous predator.”

Morten Jørgensen says Norwegian authorities with the killing show lack of respect for a protected species.

“The representatives of the most resourceful nation in the word decided to kill a representative of a protected species that had shown no aggression. All over the Arctic, people have lived with polar bears for millennia,” he says and points to both Russia and Canada where polar bears frequently enter Arctic settlements.

Last winter, a group of more than 50 polar bears were walking around the houses in Belushya Guba, a military town on Novaya Zemlya. Regional authorities decided to introduce state of emergency for the settlement until the bears left the town.

Commenting on the Governor’s argument that they don’t have the resources to protect the inhabitants in Longyearbyen, Jørgensen says: “[this is] nothing less than sanctioned state murder out of complacency, arrogance and stupidity. What’s next – sell this skin too, to the highest bidder?”

“The current polar bear management policy on Svalbard is based on fear and arrogance,” he argues. “Fear of the bear instead of understanding and respect, and arrogance that lies in all aspects of the weaponed approach.”

Jørgensen says there are multitude of ways in which the people of Longyearbyen and this bear could have co-existed, “but that would have depended on a fundamentally different mindset,” Jørgensen says.

“If respect and humility, and education, were put first, before the idea that we ultimately have the right to kill, this bear would still be alive.”

Ole Jakob Malmo tells that the same bear now shot dead was anesthetized and marked in April 2016 when it was in Adventdalen near Longyearbyen. The bear was then flown to Kinnvika at Nordaustlandet, more than 200 kilometres from Longyearbyen.

Governor Askholt said in the statement that it was also this time considered to anesthetize the bear for transport away from the settlement by helicopter. That, however, was not possible to do “due to lack of enough polar bear qualified personnel in Longyearbyen in Christmas time.”

Polar bears are the largest species of bear in the world and have a circumpolar distribution. Males weight between 300 to 700 kilos. According to the Norwegian Polar Institute, there are 19 different defined populations of polar bears in Arctic, that together contain an estimated 20,000-25,000 bears.

The bears found on Svalbard are part of the Barents Sea population that migrate with the ice also to Russia’s Franz Josef Land. This Arctic European population is estimated to between 1,900 and 3,600 individuals.

Polar bear hunting was banned on Svalbard in 1973, after 100 years of intensive exploitation. The population has recovered significantly in recent decades, the Polar Institute informs.