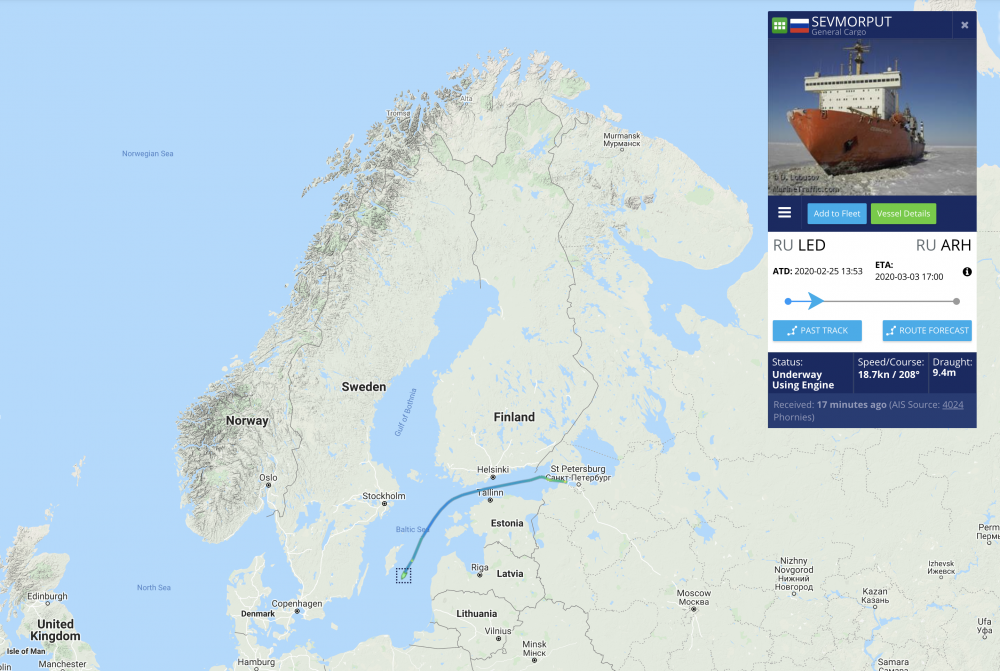 «Sevmorput» was Wednesday sailing near the Swedish island of Gotland. Screenshot from MarineTraffic.com

The world’s only nuclear-powered merchant ship left St. Petersburg on Tuesday and is now underway to Arkhangelsk where it will be loaded with equipment for Russia’s Arctic LNG-2 project in the Ob Bay.
Read in Russian | Читать по-русски
By

«Sevmorput» has been docked at Kanonerskiy yard in St. Petersburg for maintenance of hull and propellers since mid-December. Sailing back north, the ship is expected to pass under the Great Belt Bridge in Danish waters on Thursday and continue the voyage outside Norway in the weekend and early next week.

Homeport is Murmansk on the Barents Sea coast, but according to Marine Traffic, Arkhangelsk is set as destination for the current voyage.

General Director of Atomflot in Murmansk, Mustafa Kashka, says in an interview with news oneline Sudostroenie (Ship Building) that «Sevmorput» in Arkhangelsk will be loaded with cargo for the Arctic LNG 2 project under development in the Ob Bay east of the Yamal Peninsula in Siberia.

Estimated port-call to Arkhangelsk is on March 3rd.

The Barents Observer has previously reported about Russia’s plans to sail «Sevmorput» to the coast of Antarctica later this year with construction materials for the Vostok research station.

Last fall, the vessel sailed a one-of-a-kind test voyage with seafood from the Russian Far East to St. Petersburg, a cargo-route that did not prove economical profitable.