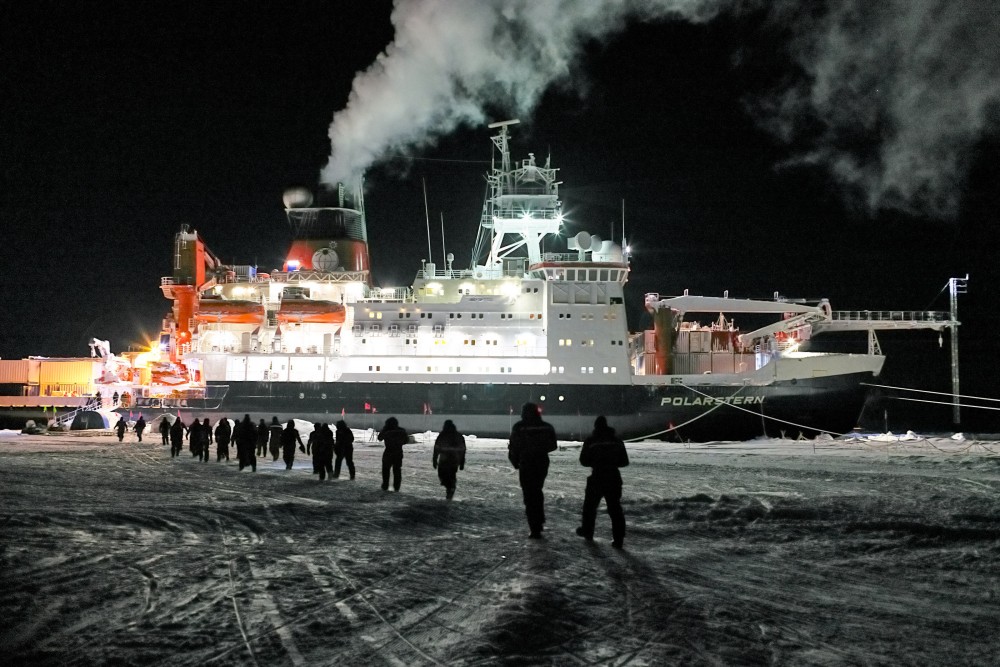 Researchers embark on the "Polarstern" as part of the MOSAiC expedition. Photo: Michael Gutsche, AWI.de

The about 100 researchers that on Tuesday set foot in Tromsø, Norway, will hardly be able to recognize the life they left in December.
Read in Russian | Читать по-русски
By

It has been an extreme voyage for the people that now are making their way back to civilization. In early December last year, they set out from the north Norwegian town onboard Russian icebreaker “Kapitan Dranitsyn” and several days later reached the “Polarstern”, the 118 meter long ice-class research vessel that is drifting across the Arctic as part of great research expedition MOSAiC.

On 86 degrees North, about 270 kilometers from the North Pole, a swap of crew and research teams was made across the ice between the two vessels. Since then, the  researchers have been locked up in the highest Arctic, isolated from the rest of the world.

Not everything has proceeded according to the carefully prepared plans of the  year-long MOSAiC expedition. Among the challenges has been the shifts of expedition crews.

The “Kapitan Dranitsyn” has been hired to deliver crews to and from the “Polarstern” every three month. In late January, the icebreaker again left Tromsø with a new team of expedition researchers. However, ice conditions have this year been extremely tough and the ship spent far more time than planned on its way north. Ice thickness in parts of the area was as much as 160 cm and pack ice hummocks had several places grown several meters tall.

The Russian icebreaker spent more fuel than planned for and ultimately needed assistance from another Russian icebreaking vessel, the “Admiral Makarov”. On 14 March, the two icebreakers lined up side-by-side in the northern part of the Barents Sea to bunker additional fuel for the “Kapitan Dranitsyn’s” home voyage.

The crew that now is returning from the expedition will meet a world in face masks, closed national borders and a collapsed air connection system. The expedition members, who come from a big number of different countries, might face major difficulties of making their way back home.

The MOSAiC expedition also faces major challenges connected with its upcoming shift of manpower in April. Extraordinary measures are taken in order to prevent the virus to spread among new crew members.

Before being allowed on board the ship, they will be tested for corona twice: once before leaving their point of origin, to avoid spreading the virus by travel, and once more at the expedition’s point of departure, to minimise the risk of introducing the virus among the expedition team, MOSAiC Expedition Leader Markus Rex explains.

“We’ve rapidly responded to the pandemic with a comprehensive safety concept and strict medical-diagnostic profile in order to reduce the risks for all expedition participants to a minimum,” Rex says in a comment published on the expedition webpage.

“The spreading wave of infections poses an immense challenge for this international expedition,” he underlined.

In case of virus infection on board, the “Polarstern” is equipped with a quarantine ward that can be applied.

The coronavirus has also affected several of the planned research activities.

The expedition has temporarily suspended its planned aerial survey campaigns. Survey flights were to focus on the atmosphere and sea ice and be carried out in four sub-campaigns from March to September. Two research planes were originally scheduled to reach Svalbard on 11 March. However, after a participating researcher tested positive for corona last week, the start of the campaign had to be pushed back, says expedition representative Andreas Herber.

In the course of the expedition, up to 300 experts will be on board the vessel, and be exchanged in phases. In addition, around 300 people will work in the background to make the expedition possible.