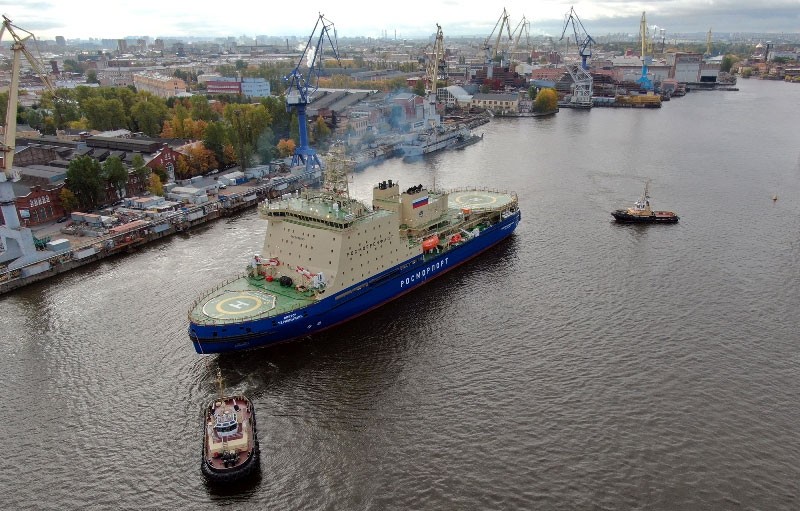 It is one of the world's most powerful icebreaking vessels, but Russia's "Viktor Chernomyrdin" might end up serving only in Baltic waters.
Read in Russian | Читать по-русски
By

The vessel named after the former Russian prime minister is one of the world’s most powerful diesel-engined icebreakers. It will be officially handed over to operator Rosmorport in the course of 2020, the state port authority informs.

That is five years after original schedules.

The 25 MW icebreaker has been under construction at the Baltic Yard and the Admiralty Yard in St.Petersburg since 2012. The 29 meters wide and 147 meters long ship is reportedly capable of breaking through three meter thick ice and stay autonomously at sea for up to 60 days. It is the only ship built of Project 22600 (LK-25).

Construction has been marred by numerous technical problems and delays, as well as cost overruns.

Sources in the Russian shipbuilding industry in 2019 said that the total construction cost will exceed 12 billion rubles (€139 million), up from the original budget of 7.95 billion (€92 million).

Furthermore, the ship might ultimately not sail in the Arctic. According to newspaper Kommersant, the icebreaker will instead end up serving in Baltic waters.

The change of plans might be related with Rosatom’s development of the Northern Sea Route, the newspaper argues. The state nuclear power company is in the process of developing infrastructure along the Arctic shipping route and the diesel-engined Viktor Chernomyrdin might not fit into plans.

When entering service, presumably early fall 2020, the icebreaker will become part of Rosmorport and its quickly expanding fleet of ice-class ships.

According to the port authority, it now has 37 icebreaking ships in its fleet