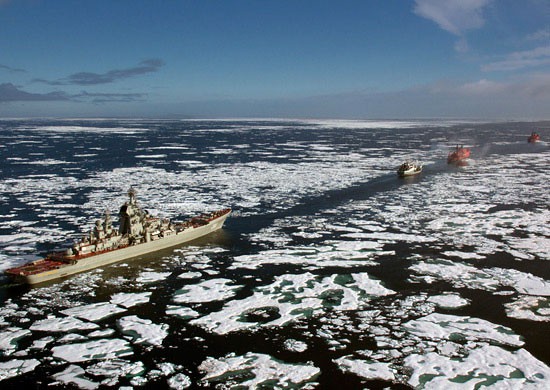 Ship convoy makes it through the Vilkitsky Strait between the Kara Sea and Laptev Sea. Photo: mil.ru

Great Arctic archipelago might be renamed after Czar Nikolai II

Strong voices argue that the Severnaya Zemlya should be named after the last ruler of the Russian Empire.
Read in Russian | Читать по-русски
By

A possible renaming of the great archipelago located between the Kara Sea and Laptev Sea is on agenda after influential individuals affiliated with the Russian Orthodox Church have raised the issue to political level.

The proposal was officially sent by adventurer Fyodor Konyukhov to legislators in the Krasnoyarsk regional assembly in late September. Konyukhov’s letter is now being reviewed by members of the regional parliament, TASS reports. Among its signatories are also Irina Tikhomirova, grandchild of famous Arctic sailor and explorer Boris Vilkitsky, as well as Bishop Iyakov of Naryan-Mar, and leader of the organization “Double-headed Eagle” Konstantin Malofeev.

Also Viktor Zubarev, member of the State Duma from Krasnoyarsk, has signed the letter.

The renaming of the archipelago will restore historical justice, Zubarev underlines to the news agency.

The far northern islands were originally named after the Russian emperor, but renamed Severnaya Zemlya by Soviet authorities in 1926. The Communist rulers at the same time changed the name of one of the smaller islands in the area from Czarevich Aleksey Land to Maly Taymyr.

Regional authorities in Krasnoyarsk underline that the proposal from Konyukhov and his associates must be subject to “comprehensive public debate”. However, the case has already gained momentum, and powerful forces are likely to continue to push for the renaming.

Fyodor Konyukhov is priest in the Russian Orthodox Church and is believed to be supported by strong forces in the Orthodox clergy. During his many expeditions, Konyukhov has raised the Orthodox banner in several parts of the world. His alliance with Irina Tikhomirova, Bishop Iyakov of Naryan-Mar and member of State Duma Zubarev is likely to be sufficiently strong to persuade both regional and federal authorities.

The renaming of the Severnaya Zemlya will fit nicely into the current Russian surge in Arctic interest and the growing political orientation towards patriotism and Russian Orthodox values.

The archipelago is one of Russia’s biggest in the Arctic. It is located partly north of the 80th parallel and comprises of four big and several small islands. Among the former are the October Revolution, Komsomolets, Bolshevik and Pioner.

The islands were officially discovered by explorer Boris Vilkitsky in 1913. They have a key geostrategic importance as they separate the Kara Sea from the Laptev Sea, and include the water increasingly used shipping on the Northern Sea Route.

As sea-ice shrinks to record-low, Rosneft prepares for northernmost ever drilling