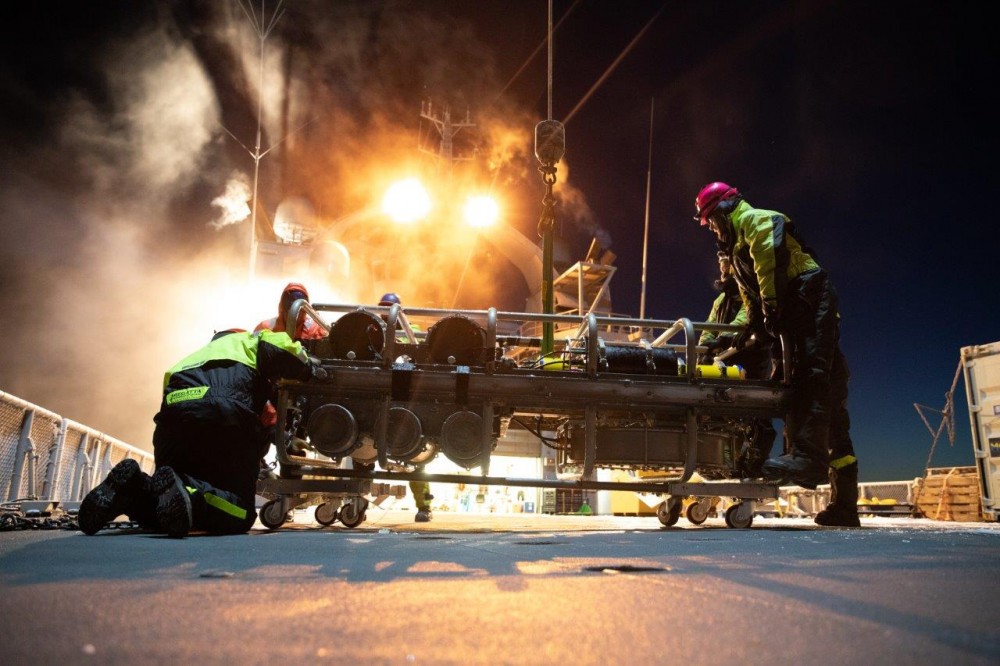 Lifting the instruments out of the ice-covered waters was a demanding job, but the scientists now have a year of collected data important for understanding the Arctic Ocean climate changes.
Read in Russian | Читать по-русски
By

The moorings were set out in the Beaufort Sea last year with a plan to be recovered by the United States’ Coast Guard icebreaker “USCGC Healy” this fall. The icebreaker, though, had to cancel the voyage just after leaving port in Alaska in August due to a fire in one of the engines. With the U.S. Coast Guard not having other capable ice-classed ships available, the Norwegians were asked to assist.

“KV Svalbard”, the country’s largest Coast Guard ship with icebreaking capabilities, started the voyage across the Arctic in mid-October in what is the first-ever sailing by the Norwegians to the waters north of Alaska.

“The first of the three moorings with the instruments was lifted onboard in an operation that lasted for 10 hours under demanding conditions for the crew,” s Navy spokesperson Michel Hayes says to The Barents Observer.

He tells that the “KV Svalbard” behaves very well in the ice. The second mooring was lifted onboard during the weekend and the crew was on Monday working with the third.

The mission was planned on short notice, and most of the high-latitude transit sailing went through ice-free waters as this summer and fall have seen a record northern edge of the Arctic ice cap north of Norway and Russia. Now, the freezing season is fast underway, also in the Beaufort Sea.

The data in the instruments recovered is part of a trans-Arctic science project aimed at measuring the mean ocean temperature across the whole Arctic Basin using acoustic thermometry.

Last summer, three moorings were placed north of Alaska, and three others north of Svalbard. Recovering all are vital for the total understanding.

The scientists are happy that the data are not lost. Interviewed by Norway’s TV2, head of the research team Hanne Sagen says this rescue mission is important for securing important information about ocean environment for future climate science.

“If the moorings in the Beaufort Sea could not be recovered, we would just have the data from our instruments north of Svalbard. This mission is therefore saving the full research project,” Sagen says from onboard the ship.

The scientists explain why it was so vital to recover the instruments now:

Sound propagates faster in warm water than in cold water. The acoustic thermometry concept builds on measuring how fast the sound signals propagate. These measurements require accurate timekeeping. During the experiment, one clock is running continuously. This clock is not as accurate as needed, and a very accurate atomic clock is turned on once a day to provide accurate times to correct the less accurate clock. The atomic clock draws a lot of energy and will stop this winter. If the clock stops it will not be possible to do the clock corrections properly, and the accuracy of the measurements is severely reduced. To rescue these important measurements, it is urgent to recover the moorings before the batteries are empty. This is the mission of the ongoing scientific expedition to the Beaufort Sea.

While scientists have concluded that the northern Barents Sea is an Arctic warming hotspot, less knowledge is available about how temperatures are possible changing under the ice-cap itself, from north-America to the Eurasian Arctic.

The moorings in the CAATEX project will hopefully answer some of the questions.

PHOTO GALLERY: In October and November 2020, the Norwegian Coast Guard ship “KV Svalbard” sailed a high-latitude voyage from the Norwegian Arctic to the Beaufort Sea north of Alaske to assist climate scientists recover three moorings with instruments that for a year had collected important data about sea temperatures under the Arctic ice cover.