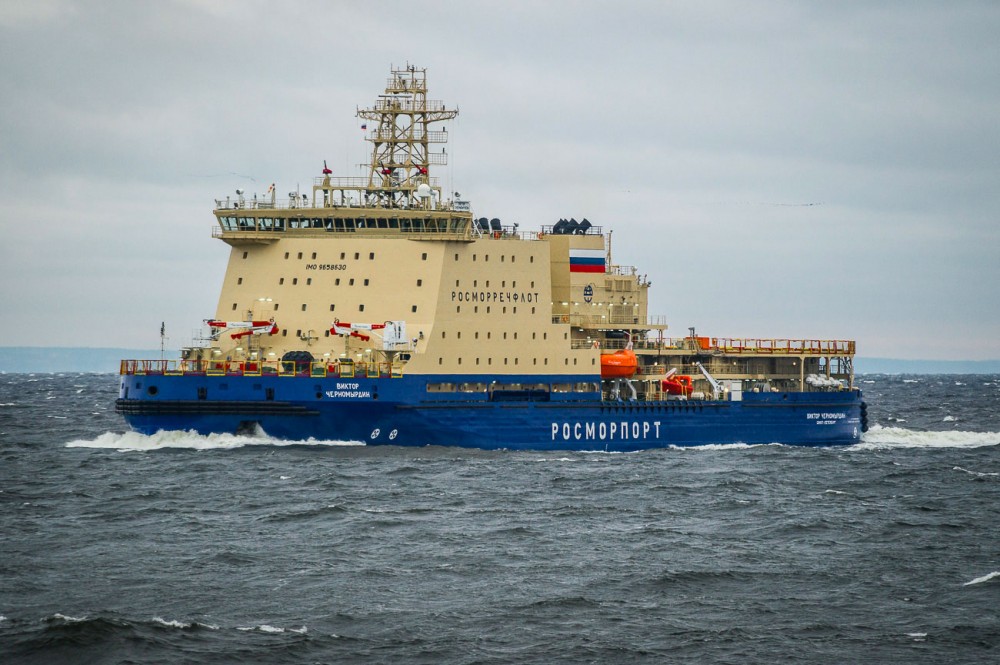 The Viktor Chernomyrdin will operate in the Gulf of Finland for state seaport agency Rosmorport. Photo: United Shipbuilding Corporation

The diesel-engined Viktor Chernomyrdin has officially entered service in the Baltic Sea. It might never be seen in Arctic waters.
Read in Russian | Читать по-русски
By

With its 25 MW capacity, the new icebreaker is the most power non-nuclear icebreaker in the world. But it will still not have the Arctic has its prime operational area.

The vessel named after Russia’s late prime minister will serve in the Gulf of Finland and the Baltic Sea, the country’s United Shipbuilding Corporation informs.

According to the shipbuilders, the 147 meter long vessel capable of breaking through up to two meter thick ice, is destined for the Gulf of Finland. But it can also work in the Arctic and the Antarctic, the Corporation adds.

The flag was raised on the vessel in a ceremony in St.Petersburg 3rd December. On site was President Putin who in a statement underlined that that the Viktor Chernomyrdin can also be applied on the Northern Sea Route.

In his speech, Putin stressed that Russia must keep up the pressure in its development of the Arctic.

“Our leadership [in the Arctic] must be constantly, every day, reaffirmed and our our positions expanded, strengthened and fleet renewed with new leading technologies on building of icebreakers and other ice-class vessels,” the President said in the ceremony.

The Viktor Chernomyrdin will be operated by state seaport company Rosmorport. It is built by the Baltic Yard and the Admiralty Yard in St.Petersburg.

Construction started in 2012 and was originally to be completed in 2015.

The 29 meters wide and 147 meters long ship is reportedly capable of breaking through two meter thick ice and stay autonomously at sea for up to 60 days. It is the only ship built of Project 22600 (LK-25).

Construction has been marred by numerous technical problems and delays, as well as cost overruns.

Sources in the Russian shipbuilding industry in 2019 said that the total construction cost will exceed 12 billion rubles (€139 million), up from the original budget of 7.95 billion (€92 million).