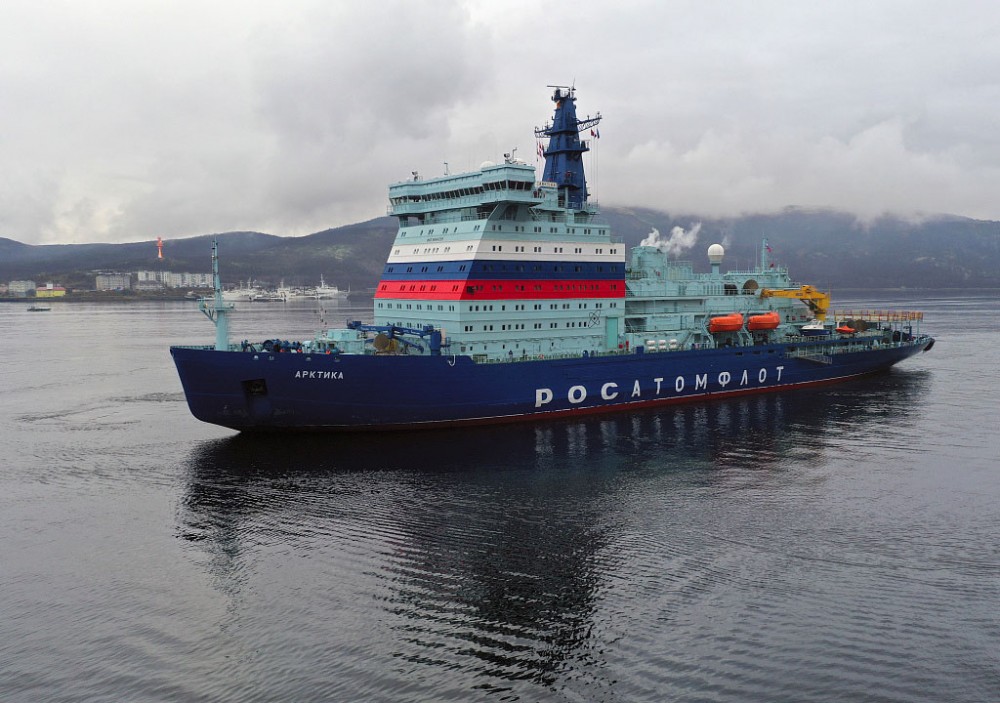 Russia will by 2027 have a fleet of five LK-60 nuclear icebreakers. The first, the "Arktika" this winter breaks ice in the Kara Sea and Gulf of Ob. Photo: gov-murman.ru

No Russian company wanted to build a floating dock for the country's fleet of nuclear powered icebreakers. Instead, the contract has ended up in a corporate wrangle between a Chinese and Turkish yard.
Read in Russian | Читать по-русски
By

But no Russian yard was ready to take the job. The price is too low, the companies argued. Representatives of the industry told newspaper Kommersant that they would need at least 8,5 billion rubles for the job.

The new Zvezda yard in Vladivostok was reportedly ready to do the job for 5,2 billion rubles, but would not be able to meet the set time schedule.

Rosatom was ultimately forced to offer the contract also to foreign companies, and the Turkish yard Kyzey Star in Istanbul was soon declared winner of the tender.

The yard that previously has built two ships for state seaport company Rosmorport agreed to construct the dock for 4,981 rubles.

However, the decision to grant Kyzey Star the job is now disputed by the Chinese yard Jiangsu Dajin Heavy Industry Co. LTD. The Chinese shipbuilders in its bid offered significantly less than the Turkish yard and has taken its case to the Russian Federal Antimonopoly Service.

Jiangsu Dajin Heavy Industry offered to do the job for only 4,57 billion ruble rubles.

The Federal Antimonopoly Service has accepted the complaint and Rosatom will now have to open a new tender, newspaper Arktichesky Obozrevatel informs.

The construction of the dock could now be significantly delayed. The original plan was to have the object ready by fall year 2024.

A delay could mean trouble for icebreaker operator Rosatom. The state company is in the process of building a fleet of five new LK-60 icebreakers (project 22220), and the first vessel, the Arktika, is already breaking ice in the Kara Sea.

The second ship of the class, the Sibir, is due to be handed over to Rosatom by the Baltic yard in the course of 2021, and the last, the Chukotka, is to be ready before 2027.

Rosatom representative Vyacheslav Ruksha has previously said that a floating dock in St.Petersburg will have to be applied in case the new dock is not ready by fall 2024.

The new dock will be towed to Murmansk were it will serve the fleet of 173 meter long 33,530 ton deadweight vessels.