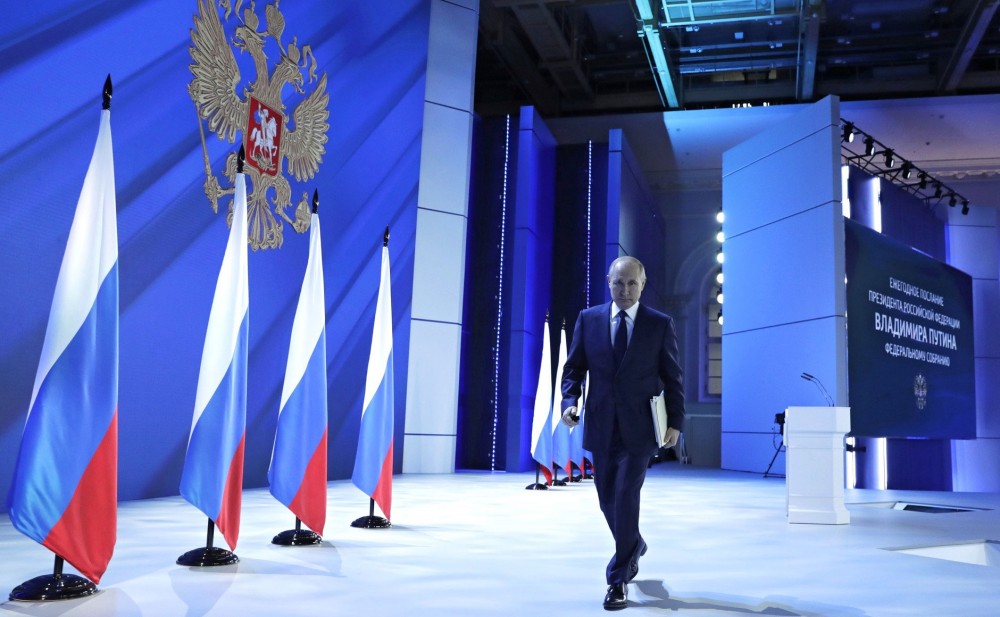 Putin in his speech on the state of the nation underlined that "all promises will be fulfilled." Photo: Kremlin

In a hall packed with people without face masks, the President highlighted problems triggered by the coronavirus. Infrastructure was high on the agenda, and Putin made clear that it is time to build the Northern Latitudinal Passage.
Read in Russian | Читать по-русски
By

The President’s annual speech to the Legislative Assembly gathered several hundred of Russia’s most prominent politicians, state officials and public figures in the downtown Manezh Hall.

Like always, the speech touched on a major variety of issues, but social problems, healthcare, the coronavirus and the economy were high on the agenda.

According to Putin, the coronavirus has hit hard on Russia, but the country has still coped better than most other countries. He also underlined that the economy now is in dire need for growth and outlined several major infrastructure projects that are to prepare the ground for regional revitalization.

Putin also lashed out against the West, saying that attempts are made to encircle and isolate Russia. However, repressive behavior against Russia will fail, Putin stressed, and warned against aggression.

“They will regret like they have never regretted before,” he said. He also warned against “crossing the red lines.”

“They better not cross the red line. And where the red lines go, we will ourselves decide in each specific case,” he explained.

The President called for new grand infrastructure development in the regions and specifically mentioned the Northern Latitudinal Passage project in the Yamal-Nenets region.

“This project has been under elaboration for a long time. Now is the time for its launch,” Putin underlined.

The Northern Latitudinal Passage includes the construction of several hundred kilometers of new railway across the wetlands and tundra of the far northern region.

The project will ultimately link two of Russia’s key Arctic railway lines, the Northern Line from Arkhangelsk and the line between Nadym and Tyumen. When finished, it will enable passengers and goods to go by train from Arkhangelsk and proceed through Labitnangy, the current last stop on the line, across the Ob Bay and all the way to Novy Urengoy and Surgut.

Included in the project is also a railway line between Bovanenkovo and Sabetta in the Yamal Peninsula. An extension could also be built to Dudinka, the port town on the Yenisey River.

The link to Sabetta was highlighted as one of the priorities in the Russian government’s recently presented Arctic Action Plan.

The project has a huge cost. Only the projected bridge across the Ob River is expected to cost 70 billion rubles.