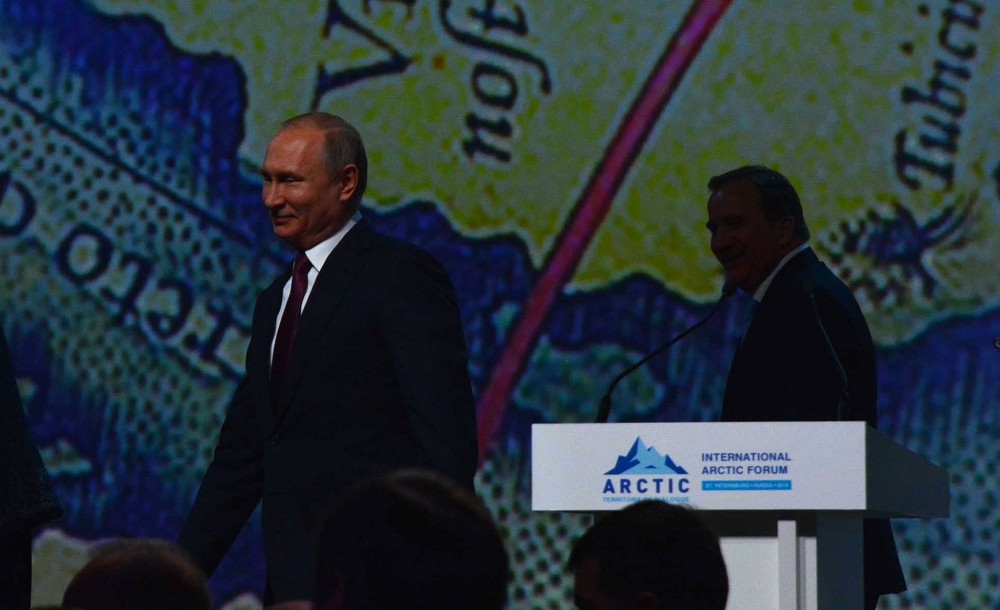 Vladimir Putin is ready to take over the rotating chair of the Arctic Council. Photo: Atle Staalesen

The Russian Geographical Society proposes a series of initiatives for the country's upcoming chairmanship period in the Arctic Council, including a historical circumpolar voyage and a meeting on the North Pole.
Read in Russian | Читать по-русски
By

The Arctic was high on the agenda as the supervisory board of the Geographical Society convened in a digital session on April 14th.

On the line from the Kremlin was President Vladimir Putin himself.

The chairmanship period in the Arctic Council provides an opportunity to strengthen our country’s role as coordinator and initiator of many programs in the region, Defense Minister Sergei Shoigu underlined in the meeting. Shoigu is President of the Geographical Society, and the supervisory board includes a big number of prominent representatives of Russian business and state structures.

In the board are also several foreign members, among them CEO of BP Bernhard Looney, co-founder and former executive chairman of Alibaba Group Jack Ma, as well as Swedish billionaire businessman Frederik Paulsen. All of the three foreign business representatives participated in this week’s meeting.

The Geographical Society has over the past years strengthened its role as facilitator of high-profile research initiatives and expeditions, often in close cooperation with the Ministry of Defense and other top government structures.

Among the most active members of the Society’s supervisory board is Frederik Paulsen, the Swedish businessman who has made a fortune with his company Ferring Pharmaceuticals.

In addition, Paulsen wants Moscow during the upcoming chairmanship to host an international conference devoted to the 160 years anniversary of Fridtjof Nansen’s birth.

“After all, as you know, Nansen was himself a member of the Russian Geographical Society,” the Swedish businessman said.

Frederik Paulsen is known not only as one of the richest men in Sweden, but also as as participant in several expeditions in Russia. In 2007, he descended to the bottom of the Arctic Ocean together with explorers Artur Chilingarov and Mike McDowell, and in 2010 he and François Bernard were the first to cross the Bering Strait from America to Russia in an ultralight aircraft.

The Swedish businessman, who now resides in Switzerland, has also in previous presidium meetings in the Russian Geographical Society proposed extraordinary expeditions. In 2019, he suggested that Russian research vessel Akademik Treshnikov escorted by nuclear-powered icebreaker 50 Let Pobedy conduct a unique voyage north of Greenland and through the Nares Strait, a transcript from the meeting reads.

“I clearly support what has been said,” Putin underlined and added that he will request the federal government to elaborate on the proposals.

According to the President, “despite the complications that we today experience on the international arena, the Arctic studies and attention to the Arctic will remain unchanged.”