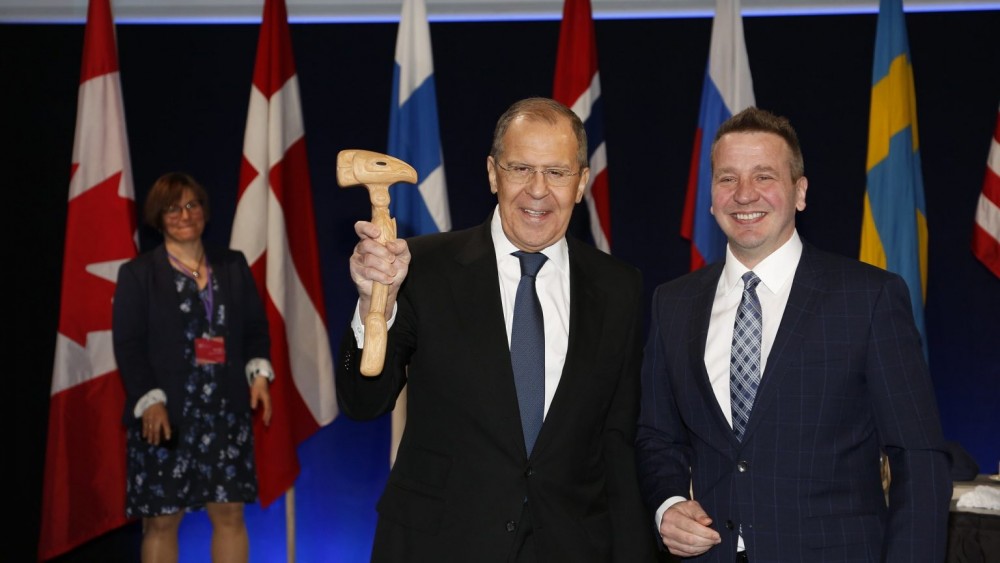 After a topsy turvy two years for the Arctic community that saw it navigate everything from a global pandemic and antagonism from the previous U.S. administration over climate change, to the amplifying of tensions between Russia and the West, the Arctic Council returned to form on Thursday, with all eight foreign ministers signing a joint declaration and touting the importance of dialogue and cooperation in the North.
Read in Russian | Читать по-русски

“Russia intends to keep up the “spirit of cooperation”, strengthen constructive interaction between all member-states and increase our willingness to work out best solutions for the Arctic and its inhabitants,” said Russia’s Foreign Minister Sergey Lavrov, addressing the delegates before Russia took over the council’s rotating two-year chairmanship from Iceland.

“The Arctic is the territory of peace, stability and constructive cooperation. We are pleased to note that all our partners share this view. We are convinced that the prosperity of the Arctic can only be ensured through concerted efforts.”

During his address, Lavrov also expressed Russia’s support for an Arctic summit; and the resumption of the Arctic Chiefs of Defense Staff meetings, suspended in 2014 over Russia’s annexation of Crimea.

“Russia has a good agenda,” Heather Exner-Pirot, Managing Editor of the Arctic Yearbook, a Fellow at the Macdonald Laurier Institute, and a Global Fellow at the Woodrow Wilson International Center for Scholars, said in a phone interview.

“I think it’s interesting that they want to hold a heads of state summit, so that means Putin and Biden. Then they called again for the resumption of the chiefs of staff meetings. To me, that all tells me that  they want to use this chairmanship, and use their leverage in the Arctic, to reduce some of the barriers that were put up on them after Crimea.”

U.S. positions itself as team player

The United States sought to reposition itself as a team player at this ministerial, the first attended under the Biden administration, after the 2019 Arctic Council meeting ended with then U.S. Secretary of State Mike Pompeo refusing to sign a joint declaration over climate language and criticizing Canada, Russia and China for their activities in the North.

“The U.S. was under a great deal of scrutiny to demonstrate that it was back in the Arctic and ready to talk about climate change and ready to look for new ways to cooperate with other members,” Marc Lanteigne, a Canadian associate professor of political science at the University of Tromso – The Arctic University of Norway, said in a phone interview.

“I wouldn’t say the United States has completely abandoned its security stance but there’s the idea that the U.S. is also ready to talk about other major Arctic concerns like human and environmental security.”

The Arctic Council also released a 10-year strategic plan (2021-2030), saying it “… reflects the shared values and joint aspirations of the Arctic States and the Permanent Participants, to advance sustainable development, environmental protection, and good governance in the Arctic.

The Arctic Council is an international forum made up of the eight circumpolar nations: Canada, Denmark/Greenland, Finland, Iceland, Norway, Sweden, Russia and the United States; and six Arctic Indigenous groups (known in the forum as permanent participants): the Aleut International Association, the Arctic Athabaskan Council, the Gwich’in Council International, the Inuit Circumpolar Council, the Russian Association of Indigenous Peoples of the North and the Saami Council.

The forum was set up in 1996 for the Arctic states to work together on environmental protection and sustainable development.

Leadership of the body rotates between the Arctic states at the forum’s biennial meetings, but there’s been increasing calls over the years for the Arctic Council to take a longer term approach to their work beyond the two-year chairmanship periods.

“All apple pie and motherhood”

Exner-Pirot says the plan was a missed opportunity.

“There’s nothing controversial in it  — it’s all apple pie and motherhood, so I’m surprised it took this long,” Exner-Pirot said. “It’s not that there’s anything wrong with what’s in it, it’s just that there’s no reform and no ambition.

“It’s disappointing because the Arctic Council does good work.  They’re monitoring and assessing and putting together good science. It’s also very good that the eight ministers are meeting every two years, but you wonder if they could be doing more with the circumstances and the context that they have. I don’t think the Arctic Council leads, especially on issues like climate change. I think they reflect what good ideas are happening in the Arctic states, or with the permanent participants, but there’s not a tremendous amount of action after that.”

The Arctic Council’s work on black carbon, and the inclusion in the 2021 Reykjavik declaration that they want to reduce the pollutant by 25-33 percent below 2013 levels by 2025, is an example of the kind of concrete goal where the body could show leadership, Exner-Pirot said, even though the declaration characterizes the target as only ‘aspirational.’

“With these eight powerful states together in one group, you’d think it would be more strategic and less operational,” Exner-Pirot said. “It would be great to see more of the impact of that work that they do and have them communicate that.”