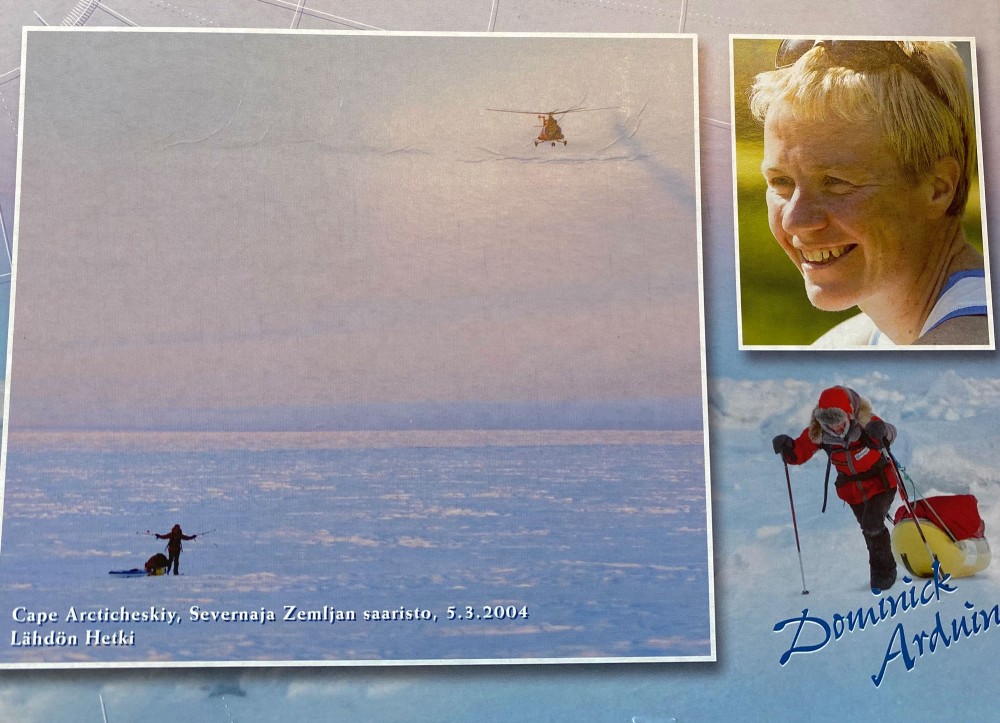 Dominick Arduin in March 2004 set out from Cape Arktichesky in Russia with course for the North Pole. She was never seen again.

In 2004, Arduin set out for her second attempt to reach the geographic North Pole and become the first solo woman to do so. Her previous attempt a year earlier had ended up in failure and losing many toes to frostbite, following her successful journey to the magnetic North Pole in 2001. The failure did not defer the then 42-year-old woman, who was determined to try again a year later. A bit too soon, according to some friends and acquaintances.

Tuomo Jantunen, the former executive manager of the Outdoor Association of Finland, was a close friend and coworker with Arduin and one of the key people who were helping search missions in 2004 and who is still working to carry on Arduin’s legacy. Jantunen worked as the executive manager of the Finnish Outdoor Association of Finland, which owns and maintains Kiilopää Fell Center, just 17 kilometres away from Saariselkä. Kiilopää was Arduin’s home and base in Finland, where she had and still has an almost legendary reputation.

Jantunen first met Arduin in the 1980s, when Arduin had recently moved to Finland and was working as a trainee at the Kiilopää centre. The short Frenchwoman had overtaken Jantunen, who is an avid cross-country skier, on the ski track. It did not take long before the two were friends, and Jantunen was intrigued about Arduin’s story and her ambitions. According to Jantunen, Arduin was responsible for getting Kiilopää on the map in Central Europe at the time, using her connections to advertise Kiilopää to the demanding clients. She was also responsible for marketing snow-shoes and mountain bikes in the area. ‘She brought a whole car load of plastic snow-shoes, which was strange to us because we had never seen that kind of plastic snowshoes,’ Jantunen explains. ‘Dominick was an avid mountain biker — she would be very surprised now if she saw that there are more mountain bikers than hikers in Kiilopää,’ Jantunen continues.

Without a doubt, Arduin was an important character in the area — but it is her disappearance and the discussion afterwards that have left the strongest impression on people around the world.

On 5th of March 2004, Arduin flew to Cape Arctichesky in Russia in order to start her second attempt to reach the geographical North Pole. After just one day, all radio contact was lost. During the next 10 days searches continued with helicopters and thermal searching, but no trace of Arduin was ever found. Every news agency in Finland was following the story, and a media circus had begun. After the search ended and it became clear that Arduin could not be rescued, the media’s interest slowly withered away and soon the story was no longer in the public’s minds. And it could have stayed that way, if it was not for the journalist and author Sven Pahajoki.

Pahajoki developed interest in Arduin’s life and decided to travel to France to find out about her early life. Pahajoki met up with Arduin’s uncle, who had a very different view on Arduin’s past than what she had been telling. Arduin’s uncle dismissed many of her adventures and accomplishments, her cancer survivor story and shifted the timeline of her parents’ death as well. Pahajoki went on to write a book about the case, called Dominick Arduin – Seikkailijan salaisuus (Published by Revontuli).

The most provocative theory from Pahajoki is that Arduin was never planning to reach the geographical North Pole - the plan was but a ruse to fake her own death and she never left for her journey. It has since been speculated that Arduin lives somewhere in Russia, or sometimes in France or Germany. The new revelations and speculations spiked interest in Arduin’s story and her life again, but are often denied and nothing has ever been proven. Jantunen, on the other hand, believes that Arduin ended up in the Arctic Ocean. ‘Dominick believed in this so much that she even sent out invitations for people to watch her reach the finish line,’ he says. Others believe that Arduin was so set on her goal that she disregarded many red flags on her journey - not enough time had passed since her injury a year earlier and she was not fully recovered from this. Nor was she as well-equipped for the journey that she could have been. This leaves people who knew her to think that she knew the risks, but was willing to take them. She was, after all, an experienced adventurer and well aware of the dangers.

It is no wonder that Arduin’s story still raises interest in audiences around the world, as well as in her home in Kiilopää.

Jantunen hosts evenings in Kiilopää Fell Centre, where he talks about the history and happenings in the centre, and Arduin is often asked about the most. “Dominick is always the central character that people want to know more about, even though her story only takes up about 10% of what I talk about,” Jantunen explains.

Dominick’s cottage, which was previously located in Kiilopää has been transferred further North to Karigasniemi, where it can be rented out. Jantunen plans to set up a memorial on the wall of the cottage so that all visitors can know its history. Jantunen plans on adding some mementos and relics, but mostly text and photos of Arduin and her accomplishments.

“Of course I want to include more about her work and what she accomplished, rather than how she disappeared and ended up in the Arctic Ocean,” Jantunen continues.

Jantunen has a lot of information to choose from since his closet is full of Arduin’s mementos - pictures, newspaper cuttings, personal items. In addition, he has a lot of information that nobody else has, which are his memories with Arduin and knowledge on how she shaped the travel industry in the North. He says there will also be a memorial room in Kiilopää centre in the future, where Arduin will also get her own part - but this is still in planning stages.