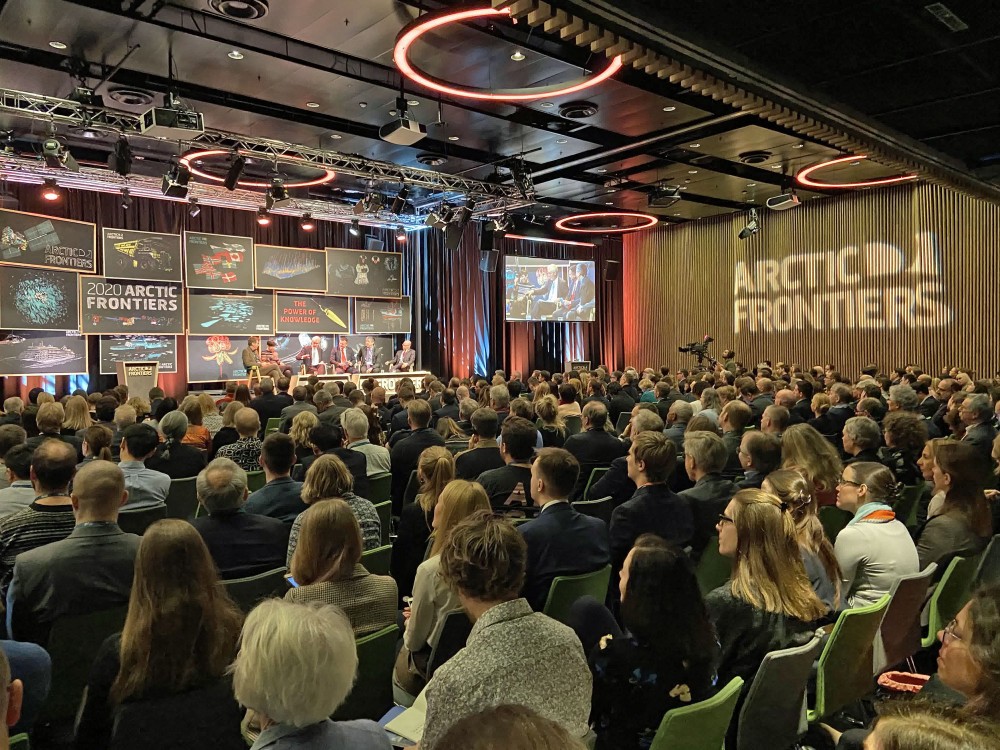 Six weeks before the world shut down: Attendees at the January 2020 Arctic Frontiers conference in Tromsø. Photo: Thomas Nilsen

Why in-person events are important for a post-pandemic Arctic

The Reykjavik-based Arctic Circle Assembly will next month mark the start of a busy season for stakeholders and policymakers in the circumpolar north to reconvene. Such non-digital venues are more important than you think, especially in the Arctic.
Read in Russian | Читать по-русски
By

Icelandic Health Authorities have now granted permission for a full-scale in-person Arctic Circle Assembly taking place at Harpa Conference Centre in Reykjavik on October 14-17. With more than 100 sessions and over 400 speakers, the event will be the first large international gathering on Arctic issues in almost two years.

“Now we can gather again. Meet and network. Be there!” chairman of the Arctic Circle organization, Ólafur Ragnar Grímsson, tweeted last week.

Since its inaugural Assembly in 2013, the annual event in Reykjavik is marketing itself as the largest circumpolar gathering, normally attended by more than 2,000 participants from about 60 countries.

Next out after Reykjavik is Rovaniemi Arctic Spirit on November 16-17. The bi-annual conference in Finnish Lapland builds on the original process that started in the late 1980s and led to the formal establishment of the Arctic Council in 1996.

“Pathways” is the branding for next year’s Arctic Frontiers conference in Tromsø, northern Norway. Kicking off on January 31, the gathering will in similarity with the Rovaniemi conference be a hybrid event, with possibilities for people to log on digitally from anywhere.

Russia, the largest of all polar countries and current chair of the Arctic Council, is set to organize its bi-annual Arctic Forum in St. Petersburg on April 11-13. Originally supposed the take place in spring this year, the high-profile event is branded under the slogan “Arctic - Territory of Dialogue” and is expected to display the country’s achievements on Northern Sea Route shipping, industrialization, and nature protection.

As the pandemic has fundamentally opened the door to online participation, virtual events are still far from satisfying the real reasons why people want to attend Arctic conferences.

Researcher Beate Steinveg with UiT The Arctic University of Norway has studied actors and agendas in Arctic politics by analyzing participation at conferences, with a hightened focus on the Arctic Circle Assembly in Reykjavik and Arctic Frontiers in Tromsø.

She says in-person participation is especially important to educate non-Arctic state actors and others sidelined in the Arctic Council.

“There is a value in bringing people from non-Arctic states to the Arctic so they can see the region, living conditions, and societies for themselves,” Steinveg argues.

With long distances and expensive tickets, traveling to meet and study the different aspects of societies in the faraway north requires means and time beyond what most people have available. Traveling to a high-profile Arctic conference, however, provides for both a unique insight to the north as well as a possibility to talk informally person-to-person with a variety of knowledgeable stakeholders and policymakers.

An important aspect to remember is that most Arctic policymakers do actually not live in the Arctic.

Beate Steinveg says what has suffered most under the pandemic is qualitative research within the social sciences with a lack of opportunity to conduct fieldwork and cross-national research collaboration.

“While it can be possible to maintain connections through digital platforms, it is almost impossible to establish new ones. Young researchers and those seeking to establish themselves within afield or discipline, people starting in new positions and so on have missed out in this regard,” Steinveg elaborates.

The researcher underlines the importance of “hallway discussions” that are totally lost when attending online.

“Some conferences offer the option that people can write questions in a chat, which are read by a moderator, but this is a much more static form of interaction than what you get at an in-person conference,” Beate Steinveg says.

As in-person conferences return post-pandemic, the coronavirus still challenges cross-border participation. While North America and most European countries are on path to open borders for vaccinated travelers by late fall this year, other countries and regions are still deeply troubled.

On Monday, the World Health Organization (WHO) suspended the approval process for Russia’s Sputnik V COVID vaccine, after several manufacturing infringements were uncovered during an inspection to the country earlier this year. None of the Russian vaccines are currently providing for a green entry pass to most European countries, meaning a participant to an Arctic conference will have to quarantine and undergo testing upon arrival.

In northern Finland, Markku Heikkilä is preparing for the Rovaniemi Arctic Spirit in mid-November. This year, the conference also marks the international launch of the Finnish presidency in the Barents Euro-Arctic Council.

“It seems that the border between Finland and Russia will not much open before our event. Talking Barents without Russians is not a good thing. This is a challenge,” Heikkilä says.

He tells that the Ministry of Foreign Affairs in Helsinki has invited some officials from Nenets Autonomous Region in northern Russia, who will chair the regional council of the Barents cooperation. “But we do not yet know the outcome.”

Rovaniemi Arctic Spirit will be a hybrid event, offering those who can’t travel to attend online.

Markku Heikkilä notes that registration to the conference is still in an early phase, two months to go. “It is obvious that many people are still in wait-and-see mode,” he says and adds: “The real conference and networking experience will be only for those who come to Rovaniemi in person.”

The organizers early concluded that a completely virtual conference would be of no use. “Random meetings and talks in the corridors are of utmost importance. How else can you build your networks,” Heikkilä rhetorically asks.

“If we lose meetings with each other, we will finally lose the Arctic,” he concludes.