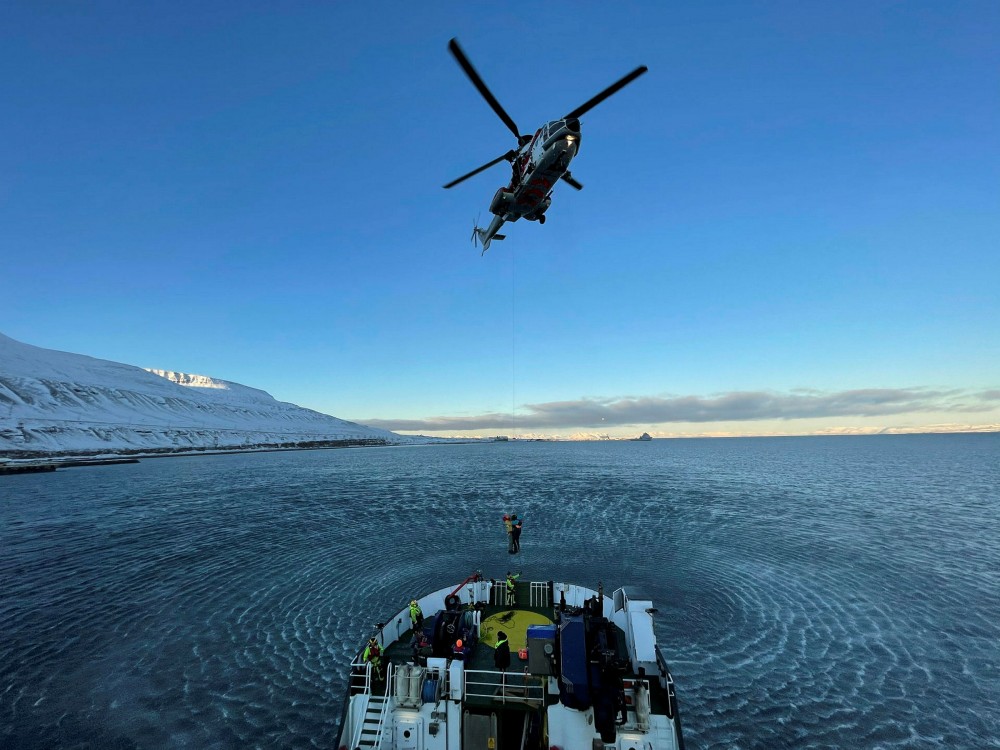 People were airlifted off a ship serving as the "cruise vessel in distress" in the waters of Svalbard. Photo: Anders Røeggen / Barentswatch

A cruise ship in distress in freezing cold Arctic waters off Svalbard is the nightmare scenario for rescue services. On Friday, search- and rescue capacities from Longyearbyen were tested in a mass evacuation.
Read in Russian | Читать по-русски

“We will explore places few have been before” and “remote and rarely visited,” are two phrases common in brochures of expedition cruise operators queuing up to sail Arctic itineraries for the post-pandemic tourism in 2022.

Ships get bigger and destinations more remote. New polar code requirements for everyone sailing the high Arctic set better standards for lifeboats, rafts, warm surveillance suits for passengers and crew. However, the evacuation of hundreds of people will still require massive external help.

On Friday, the Governor of Svalbard drilled all resources available in Longyearbyen, the main Norwegian settlement on the archipelago at 78 degrees North.

“AMRO 2021 is a full-scale exercise with a massive rescue operation in the Arctic,” says Espen Olsen, Police Chief Inspector with the Governor of Svalbard. AMRO stands for Arctic Mass Rescue Operation.

“The scenario calls on a 60 nautical mile distance between the ship in distress and Longyearbyen,” Olsen explains. In reality, the ship playing the role of “troubled cruise ship” is in the waters much closer to Longyearbyen, making it easier for the helicopter to actually evacuate all.

Students with the University centre acted as cruise passengers to be airlifted from the ship to Longyearbyen, where the local hospital and sports hall are on the alert to accommodate the evacuated passengers.

Head of Communication with the University Centre of Svalbard, Eva Therese Jenssen, says to the Barents Observer that the exercise is the second-largest ever at the archipelago. “In 2014, we had a larger health exercise that included flying people to mainland Norway and Sweden.”

All cruise ships sailing Svalbard nowadays are carrying life-saving equipment for cold climates. However, sailing through partly uncharted waters with rugged environment at nearly 80 degrees North, in the home to polar bears and unpredictable weather, nobody can be fully prepared for all scenarios that may happen.

“We will never be able to have a 100 percent rescue preparedness around Svalbard,” said Bent-Over Jamtli, Director of the Joint Rescue Coordination Centre of North Norway to the Barents Observer during a Norwegian-Russian rescue drill in the Barents Sea two years ago.

“Expedition ships sailing into these waters must bring their own survival gear sufficient to keep passengers and crew alive until rescue arrives,” Jamtli said and pointed to the five days limit set by the International Maritime Organization’s Polar Code that came into effect in 2017 for ships sailing in the Arctic. “Other cruise ships are likely the nearest assistance available if evacuation should be needed,” he said.