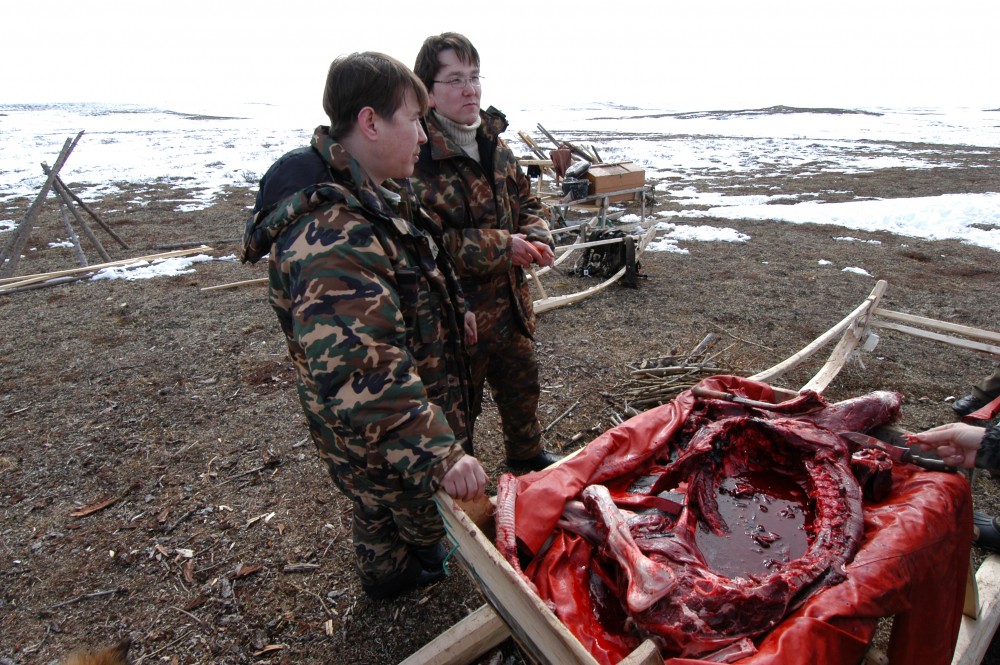 The indigenous peoples of the Russian north do not only eat the meat of the reindeer, but have other parts of the animal as well as an important part of their traditional food. Photo: Thomas Nilsen

Speed at which permafrost is releasing toxic metal is still being studied.
Read in Russian | Читать по-русски

Scientists have long known human activity like burning coal, mining metal and incinerating garbage emits mercury into the air — but in the past few years, they’ve realized permafrost is a “significant source” of mercury in the natural environment.

And as that permafrost thaws, new research says those ancient stores of mercury are being released into the Arctic where it threatens to increase the concentration of the toxic metal in traditional food sources.

“We’re starting to see evidence of that natural mercury entering rivers, lakes and ultimately the Arctic Ocean,” said Peter Outridge, a scientist with the Geological Survey of Canada.

A recently published paper in the journal Nature Reviews says 200 tonnes of mercury end up in the Arctic Ocean each year. The paper, which Outridge helped write, is one chapter of a mercury assessment carried out by the Arctic Monitoring Assessment Program (AMAP) every 10 years.

“We’re refining our understanding about where mercury [in the Arctic] is coming from,” said Outridge. As little as a decade ago, he said, the science was focused on human sources of mercury.

Outridge said mercury levels in Arctic food animals are 10 times higher than they were before the Industrial Revolution, and those levels peaked in between the 1960s and 1980s. Since then, he said, mercury concentrations in Arctic animals have been generally stable or declining.

But, he said, scientists don’t have a clear idea yet of how quickly mercury is being released from thawing permafrost. “That’s very much an active area of research,” he said.

In a plain language summary of its latest mercury assessment, AMAP says most marine mammals are at low- or no-risk for health effects from mercury exposure.

Raymond Ruben, the mayor of Paulatuk, N.W.T., said mercury contamination is not a priority or concern in his Arctic community, but it’s something he’s keeping an eye out for. He said his community relies on Arctic char and whale for food, and if mercury levels in those animals go up — it may change what people feel safe eating.

AMAP says animals near the top of the food chain — like polar bears, pilot whales, narwhals, beluga and hooded seals and several seabird populations — are “cause for concern” because they’re exposed to higher levels of mercury.

Because those animals are a critical component of traditional diets, AMAP says people living in Arctic communities face some of the highest dietary exposures to mercury worldwide.

But Outridge says people would be “well-advised” to continue eating northern foods. He said the nutritional benefits, at this point, “very much outweigh” the possible negative impact of ingesting mercury.