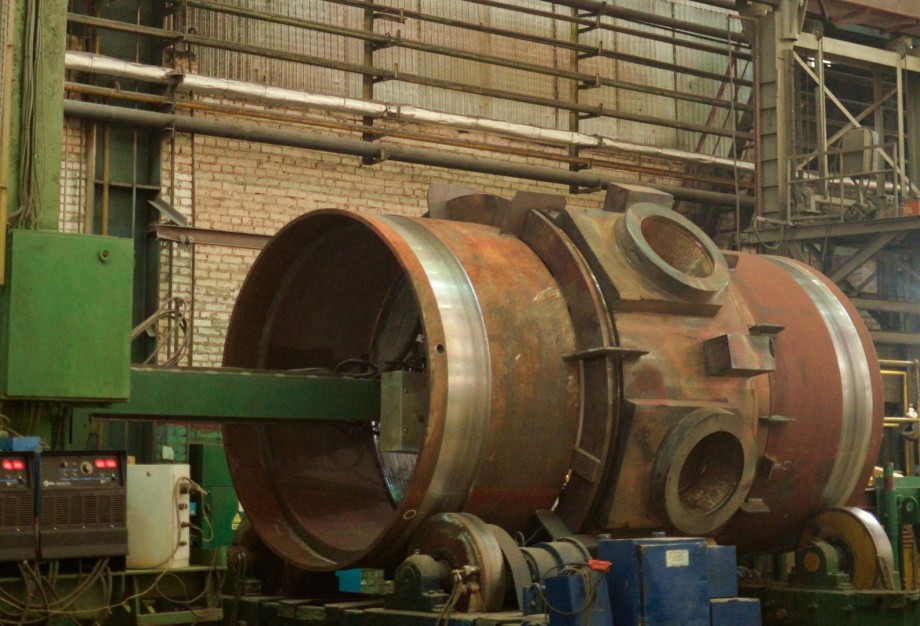 The pressure vessel for Russia's first RITM-400 reactor is now made ready at the plant south of Moscow. Photo: ZiO-Podolsk

Two milestones for Russia’s first icebreaker of the giant Leader-class are reached in August: The first reactor pressure vessel is ready and contract for metal to the bow is signed.
Read in Russian | Читать по-русски
By

Predictions for the future of Arctic shipping are different and official forecasts of cargo are disputed. Meanwhile, the construction of the largest ever nuclear-powered icebreaker is back on track.

Rosatom’s machine-building plant ZiO-Podolsk on August 29 released the first photo of the pressure vessel for the RITM-400 reactor, to be used onboard the Leader icebreaker (Project 10510).

The reactor will be the most powerful ever built for civilian shipping. Only US Naval reactors powering the Nimitz-, and Gerald R. Ford classes of aircraft carriers are larger.

RITM-400 is a scaled-up version of the RITM-200 reactor design that is powering the latest Project 22220 icebreakers of which the “Arktika” and “Sibir” are delivered, while the “Ural”, “Yakutia” and “Chukotka” are under construction.

Compared with RITM-200 the new version is 1,8 times more powerful, and the onboard nuclear plant will deliver 315 MW of thermal power.

Two RITM-400 reactors will be installed onboard the Leader-class icebreaker to be built at Zvezda Shipyard in Primorsky Krai on Russia’s Pacific coast. The first icebreaker of the class will be “Rossiya”, scheduled for commissioning in 2027. Two more are planned, but contracts remain to be signed with the government.

Like Russia’s other nuclear-powered icebreakers, the new “Rossiya” will be based in Murmansk, but mainly operate along the Northern Sea Route. Rosatomflot has previously said the plan is to engage the most powerful icebreakers to crush through the East Siberia Sea and Chukchi Sea where the ice is thickest.

With capabilities to break the ice mid-winter, Russia hopes to boost LNG shipping from the Yamal region to markets in Asia.

Leader-class icebreakers can open a channel up to 50 meters wide even when ice is up to 4,3 meters thick. That would make it possible to sail the largest LNG-tankers between Yamal and the Bering Strait.

At 2 meter thick ice, the vessel will be able to sail up to 12 knots.

Earlier in August, steel-maker Severstal won the tender to supply the extra strong metal for the outer hull of the bow to the “Rossiya”. In total, for the bow and the hull, Severstal will provide 15,000 tons of steel and bimetallic steel.

A leading expert on Arctic shipping, Mikhail Grigoriev, last week said he was skeptical about such amounts of cargo.

“I know well the basic federal objectives for goods traffic, and I do not see these kinds of volumes,” he said.

Questions are also raised on how Moscow can afford to finance its gigantic Arctic plans as the country’s economy six months into the war on Ukraine sees the greatest fall since the 1990s.