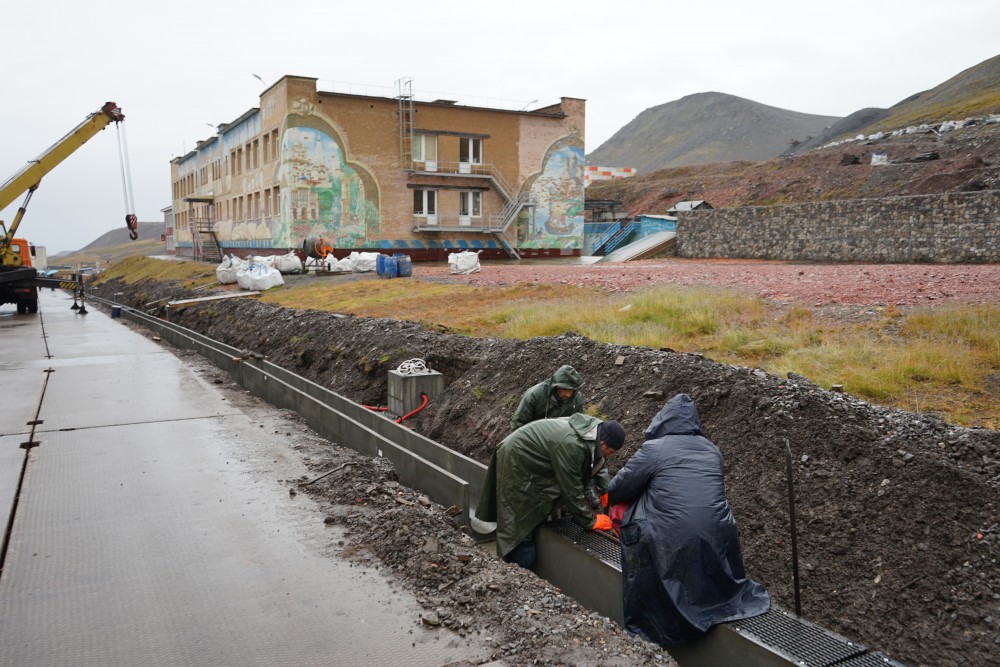 Reconstruction of the infrastructure in Barentsburg. Photo: Thomas Nilsen

1,5 billion rubles are required to modernize infrastructure in the two Russian settlements of Barentsburg and Pyramiden.
Read in Russian | Читать по-русски
By

A budget estimate will soon be presented to the Russian Government by the Ministry in charge of Arctic affairs, Rossiskaya Gazeta reported.

The money is needed for modernization of communal infrastructure, both in the mining community of Barentsburg and in the ghost town of Pyramiden.

Minister Aleksei Chekunkov says to the newspaper that some of the infrastructure upgrades are urgent.

Today, it is the state-owned company Arktikugol (Arctic coal) that operates most activities in Barentsburg. Chekunkov, though, says private investors are welcomed.

Chekunkov highlights tourism and says new hotels need to be built. There is today one hotel in Barentsburg and a hostel-style motel in Pyramiden.

However, after Russia’s onslaught on Ukraine, local Norwegian tour operators in Longyearbyen have stopped cooperation with the state-owned Russian tourism actors at Svalbard.

Barentsburg depends on the airport in Longyearbyen for incoming tourists. The town is a few hours sailing west in Isfjorden.

Especially expedition cruise tourism has increased after the pandemic, with high-end luxury vessels from around the world sailing the waters around the Arctic archipelago.

Per Arne Totland, a Norwegian writer and consultant with long experience from Svalbard, says it is expected that Russia will try to establish its own expedition cruise tourism.

“Apart from rules about where it is allowed to let tourists ashore during the cruise, this is a business that is difficult for Norwegian authorities to regulate than traffic on land.”

Norway has over the years implemented environmental regulations hindering mass tourism onshore in the fragile Arctic environment. The seven national parks at Svalbard cover some 65% of the archipelago’s territory.

Van Mijenfjorden national park is the latest on the list, established last summer in an area important for polar bears hunting on the ice in spring and summer.

Totland says it could very well be that a Russian cruise liner starts to sail directly from Murmansk to Barentsburg.

“Seen from a Russian perspective, such solution would be favorable as it does not require logistics and port calls to Longyearbyen that nowadays are difficult due to sanctions.”

Barentsburg is the only remaining Russian permanent settlement on Spitsbergen, the largest island on the archipelago. Svalbard is under full Norwegian sovereignty, but according to a 1925 treaty, all signatory countries are granted non-discriminatory rights to fishing, hunting and exploring mineral resources. For Russia, that has so far been coal mining, and some limited initiatives with tourism.