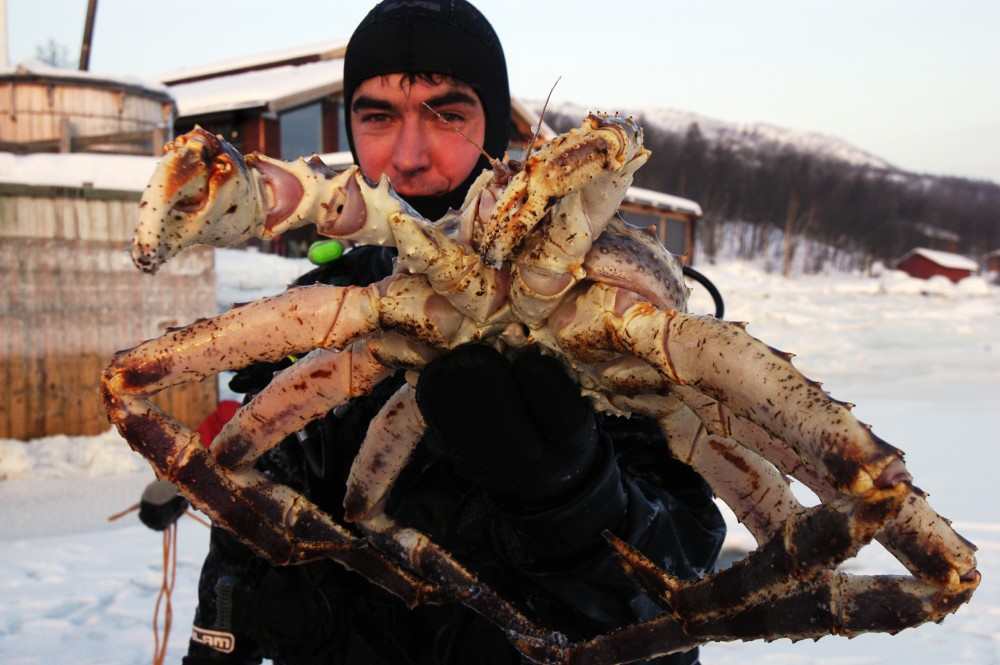 The red king crab, also called Kamchatka crab or Alaskan king crab, is a species of king crab native to the Bering Sea and Gulf of Alaska. It was introduced to the Barents Sea and along the north coast of Norway in the 1990s. The crab can grow to a leg span of 1.8 m and is delicious in taste. Photo: Thomas Nilsen

A new study predicts that Red King Crab populations will not only grow in size in the near future but will also take up a much larger area in the Barents Sea.
Read in Russian | Читать по-русски
By

Scientists from Murmansk predict an increase in the population of the red king crab  in the Arctic alongside a change in their migratory behavior.

The scientists, who published their findings in the international journal “Water”, foresee that the number of crustaceans will increase in both the eastern and the northern parts of the Barents Sea and in Norwegian Waters.

The study was carried out by Vladimir G. Dvoretsky and Alexander G. Dvoretsky whom are researchers from the Murmansk Marine Biological Institute of the Russian Academy of Sciences.

The hypothesis is that recent climatic changes in the Arctic carries an array of implications for the red king crab’s development in its larvae-stage, which impacts the crabs’ migratory patterns and population size.

In their paper, the scientists explain that the Barents Sea can be divided into two predominant regions: the South, the region through which warmer Arctic waters enter the sea, and the North, which holds colder and fresher Arctic waters.

As the larval period is considered to be the most vulnerable period of the crustacean life cycle, it would be vital for the larvae to be located in temperatures maximizing their survival rates. Previously, the  larvae has been found predominantly habituated in the southern regions of the Barents Sea where the water temperatures are warmer.

However, when analyzing previous data from studies, the scientists found that an absolute mortality rate for every larval stage was not observed in water temperatures even as cold as -1.7 degrees Celsius. The authors concluded that these findings might serve as an indication of the successful future dispersion of crab larvae to the cooler northern and eastern regions of the Barents and Norwegian Seas.

However, the data used by Dvoretsky and Dvoretsky to draw this conclusion was discovered through a lab experiment. How the crab larvae will migrate in real life is still uncertain; lab results, which are discovered in simulated and controlled environments, do not always translate into nature, which has a far higher number of unpredictable impacting factors at play.

Yet fears persist of the alien species (which was artificially introduced to the Barents region as late as in the 1960s by the Soviet Union) threatening the extinction of local ones. These fears are justified considering that the red king crab ‘re-location’ project started with approximately 1.5 million larvae, 10,000 juveniles and 3000 crabs being released into the Barents Sea between 1961 and 1965, but has now grown to a population estimation of 20 million red king crabs in the Barents Sea.

In the last ten years alone, the population in the Barents Sea has increased tenfold.

Live crabs transported from Murmansk to Moscow for the first time

The red king crab: a blacklisted but valuable fisheries resource