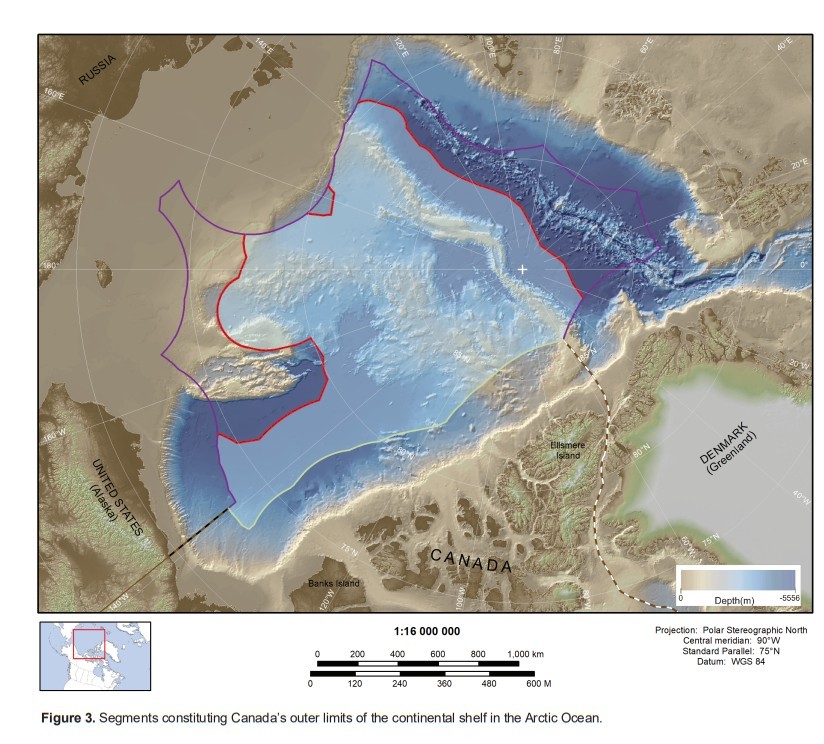 A map of Canada’s 2022 addendum to its continental shelf claim filed on Dec. 19. Source: Government of Canada

Canada filed an addendum on Monday to extend its continental shelf in the Arctic, increasing significantly its overlaps with claims by Russia.
Read in Russian | Читать по-русски

The addition is to Canada’s 2019 partial submission that claimed approximately 1.2 million square kilometres of the Arctic Ocean seabed and subsoil.

“This addendum to that partial submission regarding the outer limits of the continental shelf in respect of the Arctic Ocean covers an additional area of continental shelf extending beyond the limits provided for in that partial submission, encompassing the full length of the Central Arctic Plateau,” the government said in the Dec.19 document filed with the U.N.’s Commission on the Limits of the Continental Shelf.

The United Nations Convention on the Law of the Sea (UNCLOS) gives coastal states a 200 nautical mile continental shelf claim that allows countries the right to exploit resources in the seabed and subsoil of their respective areas.

The activities could be anything from deep seabed mining and fishing, to oil and gas exploration.

Canada has been working on gathering data to support its claims in the Arctic and Atlantic Oceans since 2003. But UNCLOS allows continental shelves to be extended if a state has scientific data to prove that particular underwater geological or geographical features are actually extensions of their continental shelves.

The Lomonosov Ridge is a kind of underwater mountain chain that extends across the seafloor of the Arctic Ocean and is something that Canada, Russia and Denmark all claim is an extension of their respective continental shelves.

Canada’s new filing comes at a time of high tension between Russia and the West.

In March, the seven western states on the Arctic Council paused their participation in the body’s work in protest against Russia’s invasion of Ukraine, saying the war undermined many of the founding principals of the forum, which include sovereignty and territorial integrity based on international law.

In June, Canada, Finland, Iceland, Denmark, Norway, Sweden and the United States said they’d resume limited council work in areas that did not include Russia.

Global Affairs Canada was not able to immediately reply to a request for comment on Thursday concerning Canada’s new Arctic claims and its interactions with Russia during the process.

But in the addendum document, Canada says it had regular consultations with Russia, as it did with Denmark and the United States, countries with which Ottawa also has overlapping claims.

“During the preparation of this submission, regular consultations between Canada and the Russian Federation revealed overlaps in their respective continental shelves in the Arctic Ocean,” the addendum said.

“Through an exchange of letters, Canada and the Russian Federation reached an understanding that: When one State makes a submission to the Commission that includes the Arctic Ocean, the other State will promptly transmit a diplomatic note to the Secretary-General of the United Nations.”

In 2021, Russia filed a claim with the U.N.’s Commission on the Limits of the Continental Shelf that goes up to Canada’s exclusive economic zone in the Arctic.

Years away from recommendations

It takes the commission several years to study the scientific merits of claims filed.

Afterwards, countries use the commission’s recommendations to negotiate final boundaries between themselves.