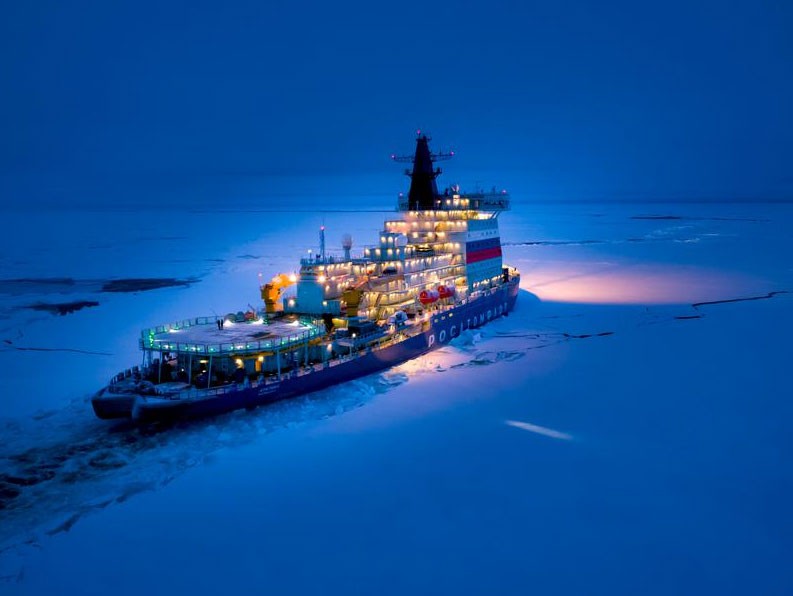 The "Arktika" is the first days of January sailing north of the Taymyr Peninsula awaiting to assist an LNG tanker coming from Asia via the Northern Sea Route. Photo: Rosatomflot

Seven Russian nuclear-powered icebreakers are in the first days of January crushing ice along the western sector of the Northern Sea Route and the outlets of the rivers Ob and Yenisei.
Read in Russian | Читать по-русски
By

Last winter season with a similar number of nuclear-powered icebreaker operating at the same time was 1991, the last year of the Soviet Union.

In post-Soviet times, only 2013 was near. That winter five nuclear-powered icebreakers sailed the Arctic, while one, the “Rossiya”, operated in the Gulf of Finland.

In the late days of the Soviet Union, Dudinka by the Yenisei River was the easternmost port kept open for shipping during winter. Dudinka is the main transport hub for metals from Norilsk on the Taymyr Peninsula.

All of Rosatomflot’s nuclear-powered icebreakers could celebrate New Year’s Even in the waters of the Northern Sea Route, the company informed.

It added that although there will be a decorated Christmas tree in the wardroom and a festive mene for dinner, all vessels are working around the clock.

The “Arktika” is the northernmost of the seven, currently in position at the Vilkitsky Stait, a bottleneck of heavy ice for shipping between the Taimyr Peninsula and the Bolshevik Island. The icebreaker is likely waiting for the large LNG-tanker “Vladimir Vorodin” sailing in from the east along the Northern Sea Route.

An important task for Russia’s nuclear icebreaker fleet is to serve year-around export of liquid natural gas (LNG) from the Sabetta production facility on the shores of the Yamal Peninsula.

On Monday, Gazprom reported an export drop in 2022 by 46 percent. Gazprom’s sales abroad, for the most to Europe, is exported via pipelines and has become a key economical weapon in Moscow’s conflict with the EU. Simultaneously, LNG sales by the Russian private-owned Novatek to Europe is still at record high levels.

The “50 Let Pobedy” is early morning January 3 sailing north in the Ob Bay, crushing the ice for one LNG tanker and one oil tanker departed from Sabetta.

Both the “50 Let Podedy” and the “Yamal” are of the older Arktika-class vessels, but are given prolonged lifetime and will sail for 5-10 years longer than originally planned.

Speaking with the Barents Observer in Tromsø, Norway, before the pandemic, Director of the Northern Sea Route Directorate, Vyasheslav Ruksha, said Rosatomflot by the year 2035 will have 13 big icebreakers ensuring a year-round navigation along Russia’s northern coast to Asia.

The three nuclear-powered icebreakers “Arktika”, “Sibir” and “Ural” of the new LK-60 class will within a few years get two more sister vessels. The “Yakutiya” and “Chukotka” are currently under construction at the Baltic shipyard in St. Petersburg.

An even more powerful icebreaker, named “Rossiya”, is to be built at the Zvezda shipyard in Primorksy Krai on Russia’s Pacific coast.

The two RITM-400 reactors for this icebreaker is 1,8 times more powerful than the LK-60 class. The “Rossiya” is planned for commissioning in 2027.