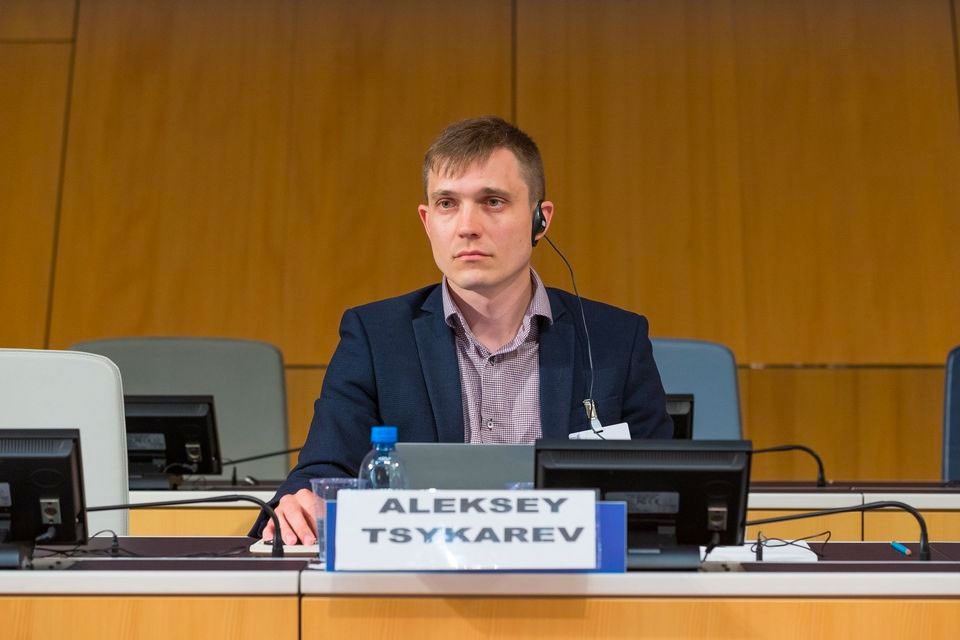 Alexey Tsykarev is member of the UN Expert Mechanism on the Rights of Indigenous Peoples. Photo: WIPO

The human rights expert Alexey Tsykarev from Russia has been refused a visa to Finland. The refusal was based on the Schengen agreement’s paragraph on diseases that concern public health.
Read in Russian | Читать по-русски
By

Alexey Tsykarev, a member of the UN Expert Mechanism on the Rights of Indigenous Peoples (EMRIP), did not get a travel visa to Finland in October. The Finnish visa autorities in Petrozavodsk, Russia, refused to grant him a two-year travel visa.

«As grounds for the refusal, they told me that one or several Schengen States consider me a threat to public or internal security or to international contacts,» Tsykarev says.

Tsykarev is a researcher of language, culture and history at the Karelian Research Centre of the Russian Academy of Sciences. He is also the chair of the non-governmental Young Karelian Society (Nuori Karjala). A few years ago, Russia accused the organization for being a foreign agent.

According to Tsykarev, the refusal of the visa was, however, based on paragraph 19 of article 2 of the Schengen Borders Code. In addition to Finland, the Schengen States include many other states of the European Union and, for example, Norway, Iceland and Switzerland.

Paragraph 19 of article 2 of the agreement, in turn, gives more details on what “threat to public health” means. According to it, it means any disease with epidemic potential and other infectious or contagious diseases.

Why is he a threat to Finland?

Alexey Tsykarev himself does not know why he is considered a threat to security and health for the Schengen States. He explains that he has not been found guilty of any crimes in Russia or in any Schengen country. Neither does he carry any contagious diseases.

«I don’t have any infectious diseases. I’m allergic, but I doubt allergies can be transmitted,» Alexey Tsykarev says.

Tsykarev plans to lodge a complaint about the visa decision at the Finnish consulate in Petrozavodsk. He has also written about the decision to Vojislav Šuc, President of the UN Human Rights Council, and Michelle Bachelet, UN Human Rights High Commissioner.

The other members of EMRIP have also engaged themselves in Tsykarev’s visa decision. At the end of October, they contacted the Finnish Embassy to enquire about the grounds for the refusal, says Laila Susanne Vars, a Norwegian member of EMRIP.

Nevertheless, Tsykarev and the other members of the EMRIP expert committee have not yet received more information from the Finnish authorities on why Tsykarev’s visa application for work in the field of culture was refused.

The Finnish authorities choose not to comment Aleksei Tsykarev’s visa matter in any detail. They state that they do not comment matters concerning individuals to anyone but the individuals themselves.

Pasi Tuominen, Director General of the Consular Services of the Finnish Ministry for Foreign Affairs, says that they can only tell about matters concerning visas on a general level.

«We do provide information on visa matters, but only for the person him- or herself. We can neither refute nor confirm the information that people tell publicly about their case,» Tuominen explains.

But generally, Tuominen says that the applicants need to apply for a visa in the country to which they are going. The annual meetings of the UN expert group EMRIP take place in Geneva, Switzerland.

«If the first visa application is refused, it will not mean that a person cannot apply for or be granted a new visa in Finland or some other country,» Tuominen says.

Tuominen emphasizes that a negative visa decision of Finland prevents the person from travelling to Finland, but does not prevent him or her from getting a visa to some other Schengen country.

Every year, hundreds of thousands of visa applications to Finland are submitted in Russia. In 2017, the Finnish consulate dealt with a total of 730,000 such visa applications. According to Tuominen, less than a percent of the applications were refused.

The purpose of the UN Expert Mechanism on the Rights of Indigenous Peoples (EMRIP) is to look at indigenous rights and provide advice on these issues to the member states of the United Nations. EMRIP’s last visit to Finland took place in February 2018, and its purpose was to look at the reform of the Act on the Sámi Parliament. As a member of the EMRIP group, Alexey Tsykarev also visited Sápmi then.

Laila Susanne Vars, who represents Norway in the EMRIP expert group, finds the Finnish authorities’ decision on Tsykarev’s visa matter strange. According to Vars, the members of EMRIP have asked the Finnish embassy why Tsykarev was not granted a visa to Finland.

«We, who are his colleagues and participate together in this expert committee, need to know what lies behind the issue and why Alexey has no longer been granted a travel visa to Finland.»

The committee members sent their letter to the Finnish authorities on 23 October. According to Vars, they had not received a reply to the letter by the beginning of November.

«We are now waiting for an answer from the Finnish authorities. In our letter, we also referred to the work of EMRIP, pointing out that it requires travelling all over the world.”

According to Vars, the refusal of a visa has a negative impact on Alexey Tsykarev’s work as a member of the expert committee.

«The experts need to be able to travel widely, as we participate in a variety of cooperation processes and conferences and have meetings all around the world.»

«We are also monitoring the reform work on the Act on the Sámi Parliament in Finland. This means that the decision of the Finnish authorities also affects our work, as one of our members can’t come to Finland, Vars explains the impact of the decision.»

«We have just asked the experts of EMRIP for advice on how to proceed in reforming the Act on the Sámi Parliament, and, at the same time, the state tries to hinder, in a way, the work of EMRIP – the work in which Alexey has participated.»

Tuomas Aslak Juuso says that he has known Alexey Tsykarev since 2008 in the context of work on indigenous policies. He has come to know Tsykarev as a person who has worked for matters dealing with language, culture and human rights and been a friend of Finland throughout these years.

«He is a member of the UN expert committee on indigenous rights. Such work should be safeguarded and not hindered in Europe, which is a pacesetter in human rights issues,» Juuso emphasizes.

Juuso considers it essential that Finland assumes more responsibility in this issue in the European Union. Finland is a member of the EU, and forbidding Tsykarev from traveling to Finland hits the human rights matters on the level of the EU.