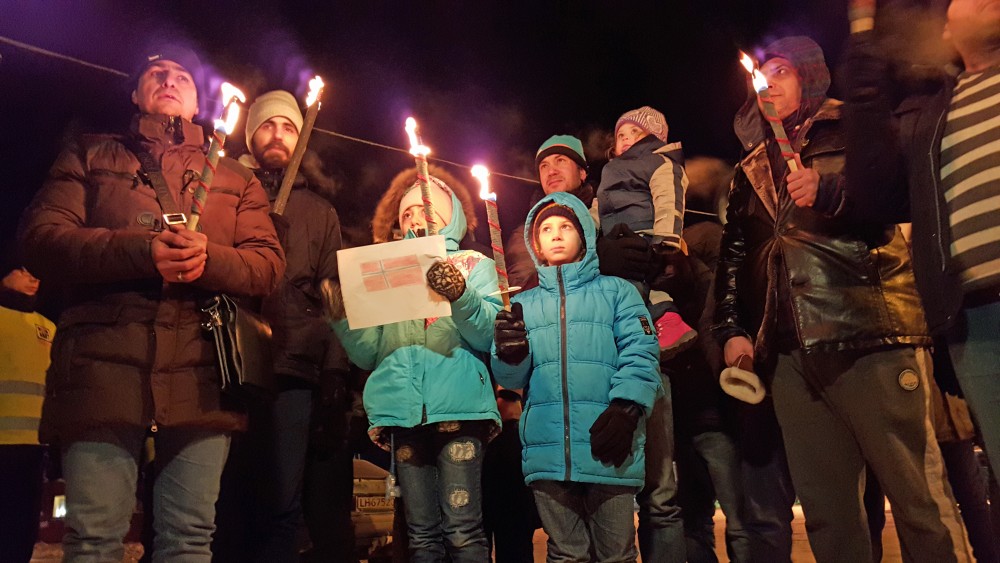 Children and adults were watching the support demonstration from inside the fence of Finnmark Reception Centre. Photo: Thomas Nilsen

They got a glimpse of hope by watching the support demonstration outside the camp near Kirkenes Wednesday evening. Warm support from the locals is however not enough; return to Russia will be carried out.
By

Around 70 locals from Kirkenes area ignored the -27°C frost and attended the support demonstration. From inside the fence, some 20 migrants watched what could be the last hope of not being returned to Russia.

On Tuesday, a Norwegian bus carried the first 13 migrants back to Murmansk. On Thursday or Friday, yet another few busses will take the same route, this time also carrying families with children.

“Everyone of those here at Finnmark Reception Centre are people with legal papers to enter Russia and will be returned,” says Tor Espen Haga, Head of the Norwegian Police Immigration Service in Kirkens to the Independent Barents Observer.

They will be sent out of a Norway that is more and more divided on returning asylum seekers to Russia. After the UN High Commissioner for Refugees last week criticized Norwegian officials for returning refugees to a country without a proper asylum system.

“We do not consider Russia as having a functioning asylum system,” Vincent Cochetel said to NRK.

Simultaneously as the first bus with 13 people that are denied stay in Norway returned across the border to the Kola Peninsula on Tuesday, Norway’s Minister of Immigration and integration, Sylvi Listhaug, had to defend the deportation in the Parliament in Oslo. Critics have been raised from several opposition parties.

In Kirkenes, Mayor Rune Rafaelsen wrote a letter to the Prime Minister asking to treat the refugees with respect before they are returned. The Centre Party in Kirkenes uses stronger words when asking the local city council to adopt a resolution naming the return of refugees without a merit hearing “inhuman and a shame for the country.”

That was also the message from some of the people in the demonstration Wednesday evening.

“We don’t like what we see, transporting people out of the country without giving them a real possibility to have their cases reviewed,” says Eirik Nilsen, spokesman for the ad-hoc group “Refugees Welcome to the Arctic.”

He doesn’t at all believe those in line to be returned will be safe in Russia.