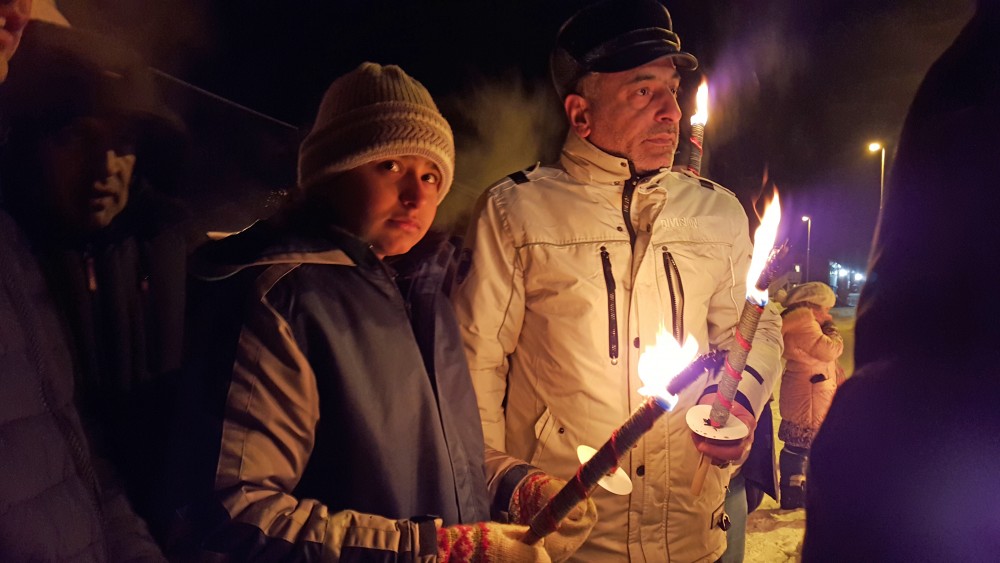 This man and boy at the Western Camp outside Kirkenes agreed to have their photos published. They watched the support demonstration outside the camp taking place last Tuesday. Photo: Thomas Nilsen

Campaign group urges bus drivers, police staff and others not to participate in deportations

The group says deporting asylum seekers to Russia without an actual consideration of their individual asylum applications, is a breach of Norway’s Human Rights obligations.
By

Refugees Welcome to the Arctic is a campaign group within the movement Refugees Welcome to Norway. The group has over the last few weeks followed the situation at Vestleiren “(Western Camp) outside Kirkenes where asylum seekers that are to be deported back to Russia are waiting.

“Hastened deportations of refugees to Russia must stop immediately” says Ask Ebeltoft and Linn Herland Landro in a press release.

They now urge staff not to contribute towards what they call “illegal deportations.”

“We urge buss drivers, police staff and other personnel to refuse to participate in these illegal deportations,” they say.

The Norwegian Police Immigration Service has over several days tried to facilitate for transportation of persons back to Russia via Storskog checkpoint, but for various reasons, no transportations have been done since Tuesday. On Tuesday, the first bus transportation with 13 people back to Murmansk took place.

On Friday evening, the police published a press-release saying the returns via Storskog was canceled because no bus capacity was available. In addition, the police says trouble with the computer system “and/or lack of personnel at the Russian border checkpoint Borisoglebsk.”

Before Christmas, 371 people that came to Norway via the so-called Arctic Route from Russia, were returned on bicycles across the same border. These were people without legal papers for Norway and were therefore denied stay in the country.

On Saturday, Norway’s Police Immigration Service said to Aftenposten that it is under consideration to fly the asylum seekers back to Murmansk or directly to Moscow. That would require Russian approval.¨

The group Refugees Welcome to the Arctic says those now supposed to be returned are people whose application for asylum have not been considered or processed on an individual basis, as the group believes is their right.

“Amongst the asylum seekers in question, there are persons who do not have legal residency in Russia, and who therefore risk being deported out of Russia and into their country of origin, where many will be in danger of persecution and starch punishment,” Ask Ebeltoft says

Last Friday, the UN High Commissioner for Refugees, Vincent Cochetel, said “Norway is wrong to regard Russia as a safe country for people who need protection.” … “There are large cracks in the Russian asylum system. They can end up in a no man’s land where they risk freezing to death,” Cochetel said according to ABC News.

Norway’s return of asylum seekers across its Arctic border to Russia has got huge international media attention.

“At the very worse, deportation may lead to torture, persecution and death,” the group Refugees Welcome to the Arctic argues.

Earlier this week, around 70 locals from the Kirkenes area had a demonstration outside the Western Camp showing support to the asylum seekers on the inside of the frozen fence.