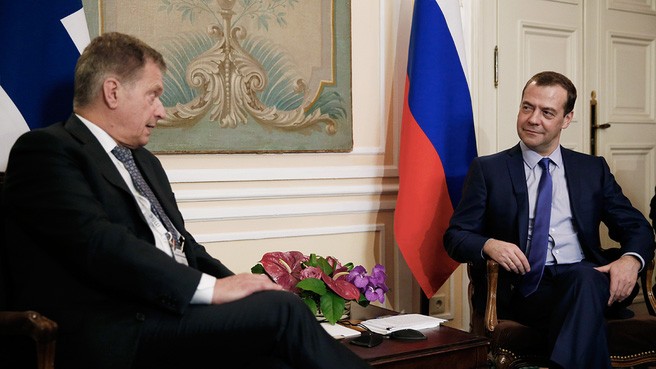 «Previously, it was not possible for people without visas to make it to the Russian-Finnish border», Finnish President Sauli Niinistö told Russian Premier Dmitry Medvedev.
By

Migration was a key issue in the meeting between the two leaders, which took place in Munich last Friday.

«This phenomenon is a new one, must say, because over a long time we had a mutually beneficial system according to which is was impossible for people to make it to the border without a visa», Niinistö said, a transcript available on the Russian government website reads.

The Finnish president added that both Finland and Russia must be considered safe countries and that people who make it across the Russian-Finnish border and apply for asylum consequently «in principle should not be allowed to choose where to stay».

While migration influx from Russia to Norway came to a full stop in late November, migrants have continued to cross the Russian-Finnish border. Since January 1st, 788 asylum seekers have entered Finland at Raja-Jooseppi and Salla, the country’s two northernmost border checkpoints to Russia. That is more than the 694 asylum seekers that came from Russia to Lapland during 2015.

The meeting between Niinistö and Medvedev. took place ahead of the Munich Security Conference, an event which was used by Medvedev to strongly criticize western policy towards Russia and warn against consequences of migration.

Medvedev responded to Niinistö that both Russia and Finland are committed by a number of European conventions, but that the countries still have the opportunity to look for a solution within the frames of a bilateral agreement on border checkpoint procedures from 1994.

«Our colleagues are still working on these issues», Medvedev said and referred to a recent meeting with Finnish PM Juha Sipilä, as well as talks between the Finnish Interior Ministry and the Russian FSB and Migration Service.