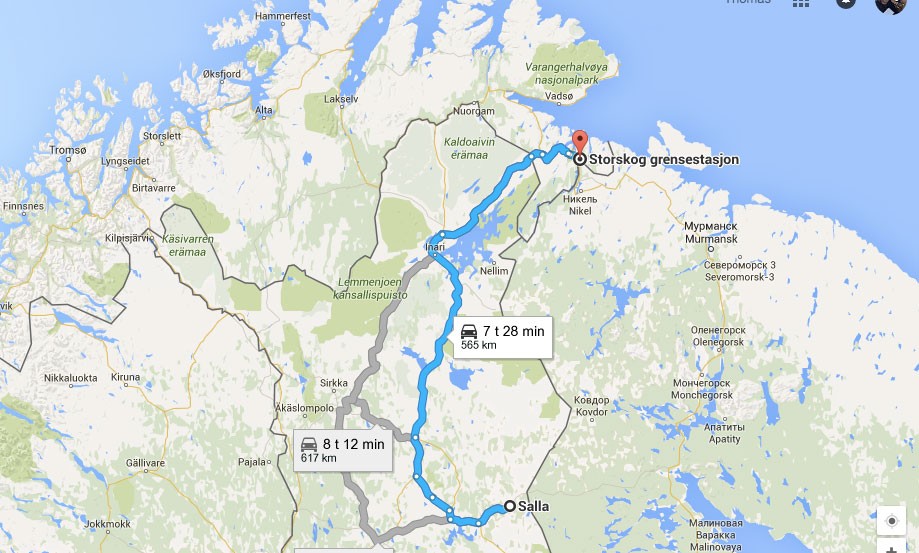 If you are not a citizen of Finland, Russia or Belarus, you will have to drive all the way north to Storskog checkpoint between Norway and Russia is the destination is Murmansk. Map: Google.

Norwegian and EU citizens can no longer enter or leave Russia at Raja-Jooseppi and Salla.
By

Restrictions on Finland’s two northernmost border checkpoints to Russia took effect from Sunday April 10th, reports the Finnish Border Guard. For the next six months, only citizens of Russia, Belarus and Finland will be allowed to travel between the Kola Peninsula and Lapland.

The restrictions were agreed when President Vladimir Putin met with Finland’s President Sauli Niinistö in Moscow three weeks ago and is aimed at putting a stop to the flow of migrants.

Newspaper Iltalehti reports on Tuesday that it was Russia who insisted on having a bilateral agreement with Finland on closing Raja-Jooseppi and Salla for third country citizens.

In February, Finland’s Foreign Minsitry suggested in a memorandum to Moscow that also citizens of EU, Switzerland and nationalities from European Econimc Area (EEA) Norway, Iceland and Liechtenstein should be allowed to travel across Lapland’s eastern border to Russia.

That proposal was rejected outright by Moscow.

“Russia wanted to break the unity of Finland and the European Union, and it succeeded,” Iltalehti writes.

From last autumn until end of February this year, a total of 1,760 asylum-seekers entered Finland from Russia in the north, Helsingin Sanomat reports.