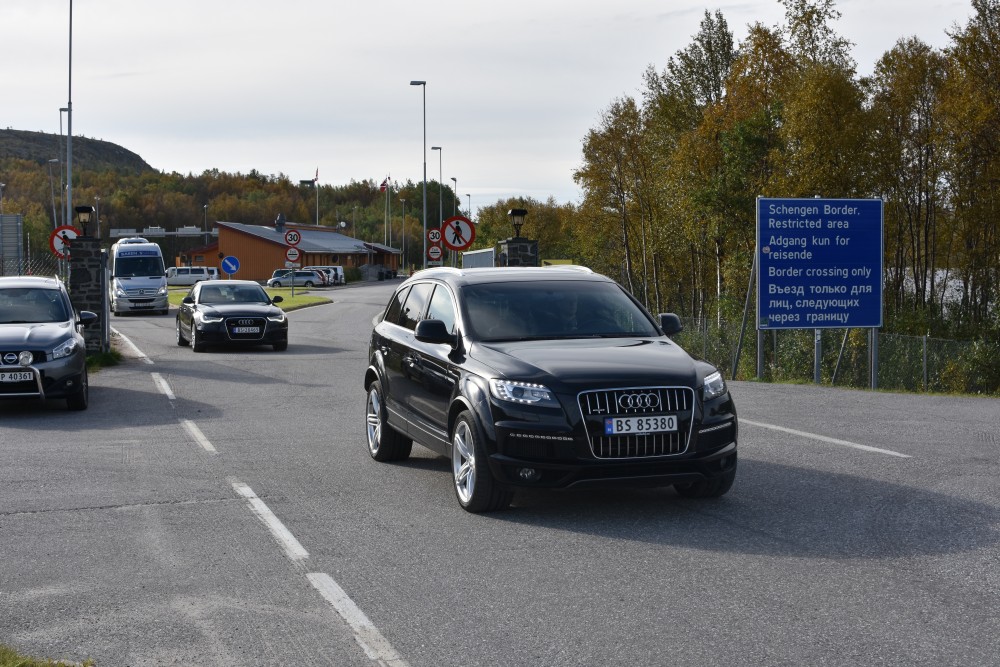 First Deputy Director of Federal Security Service (FSB) – Head of Border Service, General Vladimir Kulishov and several other top FSB officers crossed the border at Storskog some few minutes before 9 am. Here inside the Norwegian police cars in a motorcade driving them the few hundre meters to Sollia Guest House. Photo: Thomas Nilsen

Inside this motorcade crossing the border at Storskog Thursday morning is Army General Vladimir Kulishov, one of President Vladimir Putin’s top security officials.
Read in Russian | Читать по-русски
By

Security was tight when the motorcade of five cars, including an armoured vehicle, drove out from Storskog checkpoint, the only cross-border road between Russia and Norway.

General Kulishov has never been in Norway before. He is First Deputy Director of Federal Security Service (FSB) – Head of Border Service. The only higher-ranking FSB official is Director Aleksandr Bortnikov, a man that can’t cross the border since he is on EU and Norway’s list of individuals sanctioned during the Ukrainian crisis.

The motorcade drove directly from the border to Sollia Guest House where the secretive and important border meeting takes place.

Norway’s National Police Commissioner Odd Reidar Humlegård heads the Norwegian delegation together with Police officials from Finnmark. In Norway, it is the police that is in charge of border controls, including the 196 kilometre long land border to Russia.

The National Police Directorate in Oslo confirms in a phone conversation with the Barents Observer that Norwegian police and Russia’s FSB Border Guard Service have its annual meeting today as a part of the offical agreement between the two parties.

Oslo would not elaborate more on the on-going meeting.

Chief of Police in Finnmark, Ellen Katrine Hætta says to the Barents Observer that cooperation meetings like this are important. “It is an important cooperation on our common border and I am glad that this cooperation works well.”

In earlier years, the annual meetings have been on a lower level, with regional representatives of FSB Border Service in Murmansk and the Northerwestern Federal District.

No official information is yet released about what topics are on the table at the meeting with the FSB delegation that came across the border at Storskog in the high north of Norway, instead of to Oslo.

Storskog border checkpoint made international headlines last winter as 5.500 migrants came biking across the border on the so-called Arctic Route to Europe.

The flow of migrants then suddenly stopped and not one single asylum seeker has crossed into Norway at Storskog since late November last year.

In February, President Vladimir Putin told the collegium of FSB to tighten control. “We should tighten monitoring of the refugee flows coming into Russia or transiting onwards to European countries,” he said.

It would be logical to belive that last year’s migrant flow across the Norwegian - Russian border is a topic on the table for discussion at today’s meeting that take place at the guest house only a few hundred metres from Storskog. The Russian FSB delegation is not driving to Kirkenes, the nearest Norwegian town, some 15 minutes drive west of Storskog.

2008-2013
Deputy Director of FSB - Chief of Staff of the National Anti-Terrorist Committee.

First Deputy Head of the FSB Department for Combating Terrorism.

Head of FSB in the Saratov region.

Norwegian and Russian border officials meet regularly, but then on levels lower in the system than today’s high-ranking delegation of FSB officials. FSB Border Service is also in charge of the Coast Guard.

Yesterday, the Barents Observer reported about an official document indicating that Moscow is preparing the reintroduction of traveling restrictions in the borderlands to Norway and Finland. Such restrictions would favour FSB to keep a much tighter control of people, both Russians and foreigners, staying in, or traveling through the near-border areas. That includes both towns of Nikel and Zapolyarny where many of the migrants stayed before applying for asylum on the Norwegian side of the border last winter.

In July 2014, Ukraine opened a criminal case against General Kulishov. He is suspected in having “supported and financed terrorism, and of illegal arms deliveries to Ukrainian territory”, RBC reported.

In July, Kulishov was appointed by President Putin to head an interagency operational headquarters to ensure the security of FIFA World Cup to take place in 11 cities across Russia in 2018.