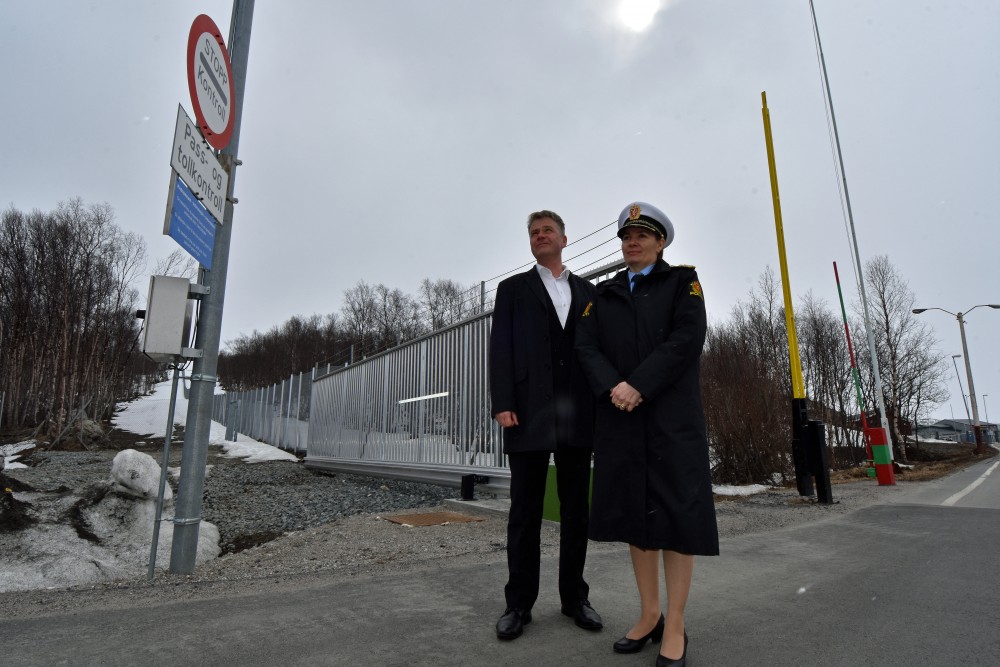 Norwegian Minister of Justice Per-Willy Amundsen and Finnmark Chief of Police Ellen Katrine Hætta at the new fence on the border to Russia. Photo: Thomas Nilsen

“Absolutely something to consider,” says Per-Willy Amundsen after visiting the undersized and cramped facilities at Storskog.
Read in Russian | Читать по-русски
By

On Tuesday, Norway’s Minister of Justice, Per-Willy Amundsen, got first-hand insight to the working conditions for immigration and customs officials at Storskog, Europe’s northernmost Schengen checkpoint on the border to Russia.

“I understand the needs for good working conditions. Considering the development in traffic, it is not at all difficult to understand the need,” Per-Willy Amundsen said to the Barents Observer after being shown and told about the challenges.

The minister, however, did not put any 2018 budget promises on the table.

Current building at Storskog was erected in the early 1990s when traffic was one third of today’s border crossings between Norway and Russia in the north.

In the fall 2015, when some 5,500 migrants entered Norway on bicycles, immigration officials even had to work outdoor in snowy, freezing cold. Tents and barracks were urgently brought in to relieve the situation.

Now, peaking hours are when loads of people from Russia’s Murmansk region drive to Norway for shopping on Saturdays.

The fence was by locals in Norway’s border town Kirkenes said to be a symbolic joke since intruders easily can walk around. The Government says the fence is necessary to stop refugees crossing into the country. Since November 30, 2015, not one single asylum seeker has entered Norway from Russia at Storskog.