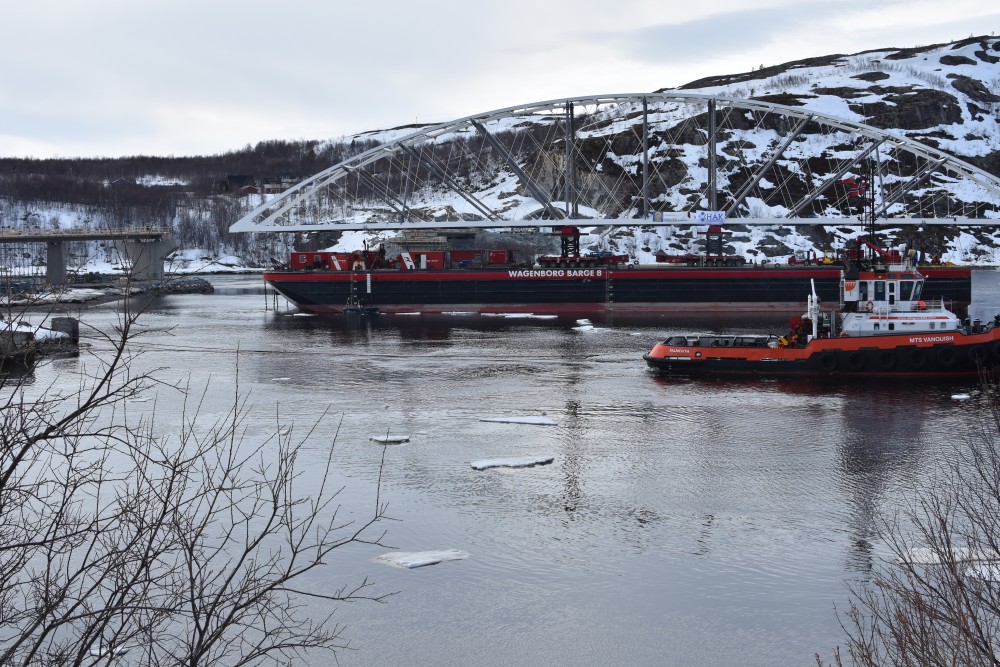 The new bridge for the road between Norway and Russia. Photo: Thomas Nilsen

Here comes the new bridge to cross the mouth of the Pasvik river on Europe’s northernmost cross-border highway to Russia.
Read in Russian | Читать по-русски
By

Built in Germany and towed north along the coast of Norway, the steel-bridge is this weekend being lifted off the barge and placed on the pillars where the new road is crossing the water some few kilometers from the border.

Although not all of Russia’s current relations with Norway are of bridge-building character, traffic across the northernmost border checkpoint is increasing. So far this year, traffic is up some 20 percent.

On the Norwegian side, the new shortcut across the river will open in September as soon as the work on the bridge is done. The new bridge leads the road directly into a 690 meters long tunnel taking traffic outside the residential area. The new bridge is 284 meters long, of which the steel construction is 120 meters.

The old bridge, built in 1960, is the only narrow road across the river. Thus, in Cold War thinking it would be rather natural to get rid of it in case of a Soviet invasion. The nearest Norwegian military border guard camp was located only some few hundred meters from the bridge and a regular scenario in exercises was to run down the hill and blow up the bridge.

Upgrades on European highway E105 between Kirkenes and Murmansk started 10 years ago with the opening of the new bridge over the Kola Bay and improvement of the road on the Russian side of the border.

The work started in a time when Norwegian, Russian trade and business cooperation was believed to boost.

A new bridge was built over the river near Pechenga in 2013 and a new shortcut between Zapolyarny and Salmijärvi opened in 2014. Drivers do no longer need to take the detour around Nikel when heading for the border. The stretch from Salmijärvi to Borisoglebsk checkpoint was ready last fall.

With all new shortcuts, bridges, and upgrades completed, the distance between Murmansk and Kirkenes is 25 kilometers shorter than 10 years ago. If no queues at the border checkpoints, driving from Kirkenes to downtown Murmansk now takes three hours, maybe half an hour more in winter.

On the Norwegian side of the border, the 10 kilometer long road-construction, including the tunnel and bridge costs 875 million kroner (€93 million).

E105 is the only road connecting Norway and Russia.