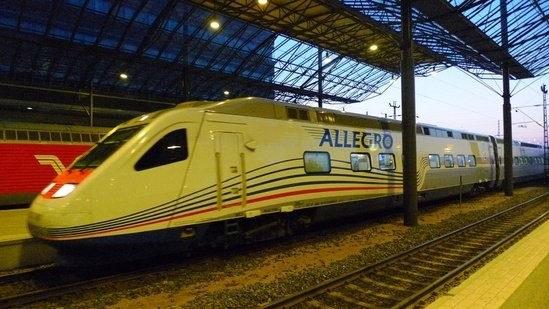 The Allegro train has four departures per day from Helsinki and St. Petersburg. The ride takes 3 1/2 hours. Photo: Thomas Nilsen

Russia is planning to reform it’s tourist visa system, and introduce an online, free-of-charge visa for travel to certain areas, according to reports from a number of Russian media outlets.
Read in Russian | Читать по-русски
By

In the northwestern Leningrad region, which includes the cities of St. Petersburg and Vyborg, the proposed reform would come into effect from the beginning of October this year.

The Finnish Consulate General in St. Petersburg told Yle on Sunday that no information about the proposed visa changes has yet been received through official channels. Therefore, the consul was unable to confirm when the e-visa will be introduced and whether it will apply to people living in Finland.

“But if Russia’s President Vladimir Putin has signed the declaration, as the press reports say, then it can be considered pretty certain at this point,” said Consul Sebastian Gahnström.

It is however considered likely that people living in Finland are one tourist group that the reform will be seeking to attract. Alexander Drozdenko, governor of the Leningrad region, told the Russian news agency TASS in an interview last week that the reform will significantly increase tourist numbers from Finland and the Baltic countries.

Russia already has an electronic visa system in place for the Kaliningrad and Vladivostok regions which, according to Gahnström, works relatively well.

“It’s fast, I think it’s free and it’s completely online, so for the applicant the process is really much smoother than the standard visa procedure. However, we do not yet know whether a similar arrangement will apply to the Leningrad region,” Gahnström said.

How the e-visa differs from the current visa

Saimaa Travel, a tour operator based in the eastern Finnish city of Lappeenranta, has organised cruises to Vyborg and connecting links to St. Petersburg for over twenty years. Cruise trips to both these cities are currently visa-free, but travelers on the Allegro train still need a visa to enter the region.

Kirsti Laine, Managing Director of Saimaa Travel, is confident that e-visas will increase tourism – especially as tourists’ interest in Russia has grown in recent years.

“There will no longer be any difficulties when preparing to travel”, Laine told Yle.

Under the current system, a visa is usually applied for through a travel agency. Applicants must send their passports and photographs to the agency and pay a processing fee. Currently, travel agencies charge approximately 80 euros for a single tourist visa.

The new system could allow travelers to apply for their own visa online, and at no cost.

Suvi Palosaari, from Oulu, said the new system sounded “promising” as she boarded the train to St. Petersburg on Sunday.

“We had to take normal visas and I had to get an express visa. It was quite expensive,” Palosaari said

However, the electronic system is not without challenges. Last week, tabloid newspaper Ilta-Sanomat tested the Kaliningrad online visa application form, and encountered problems when attempting to upload images.

“We hope it works. Of course, there’s always the other side of these issues, whether the visa application works as easily as it’s supposed to,” said Saimaa Travel’s Laine.

“It’s easier to get here than to Berlin”

Finnish tourists are increasingly interested in travelling to St. Petersburg, as is evident at Helsinki Central Station on Sunday morning as the Allegro train waits to depart. The train is fully booked to the very last seat, according to staff, as have been many other connections during this summer.

Finns are not the only nationality on the Sunday morning Helsinki to St. Petersburg train. There are also a large number of Russian travelers returning from trips to Finland, as well as tourists from other countries – including a group of Australians.

According to Consul Sebastian Gahnström, in addition to visiting the traditional cultural sites, Finnish tourists are now turning to places like St. Petersburg to experience a new kind of urban culture with its restaurants and events. The proposed e-visa system will very likely lead to an increase the number of people travelling from Finland to St. Petersburg, according to Gahnström.

“For some travelers, obtaining a traditional visa has been a costly and lengthy process. If the e-visa is implemented according to the Kaliningrad model, St. Petersburg will seem a lot closer. It will be easier to get here than Berlin,” Gahnström said.

Russia has made a number of attempts to simplify the visa application process in recent years. At last summer’s football World Cup Finals, it was possible to purchase a visa and a train ticket at the same time. Gahnström thinks that such experiments are still ongoing.

“According to Russian authorities, the organisation of the World Cup went well and now they want to expand this type of experiment,” Gahnström explained.