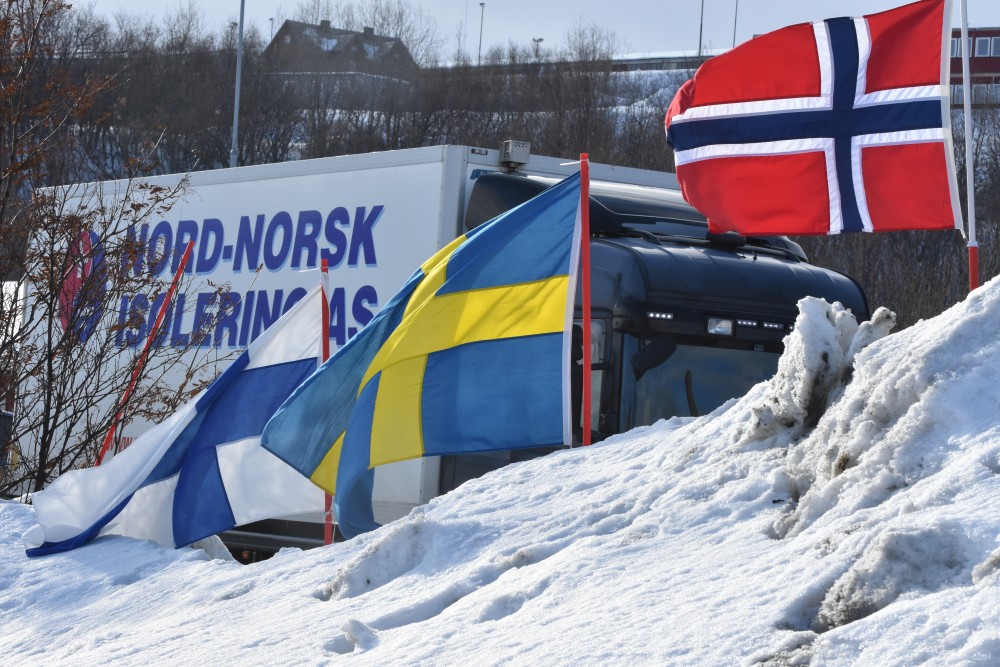 Trucks with food and supplies will still be allowed to cross the borders to northern Norway. Photo: Thomas Nilsen

Coronavirus: Only people with a working or living permit in Norway or another valid reason will be allowed to enter any of the northern cross-border roads from Finland from 8 am Monday morning.
Read in Russian | Читать по-русски
By

The government has decided that the police should institute temporary entry and exit controls at the inner and outer Schengen border. The control regime will, at first, last for a 10-days period.

The borders will not be closed, but foreign nationals, including citizens of the European Economic Area (EEA), who lack a residence permit in Norway, could be denied entry.

“They will be turned away at the border under provisions of a Norwegian law relating to the control of communicable diseases,” a press release issued on Sunday reads.

It adds: “Temporary entry and exit controls will also be introduced at the internal Schengen border.”

Norway has six formal cross-border roads to Finland in the north; at Neiden (Näätämö), Nuorgam, Utsjoki, Karigasniemi, Kivilopolo and Kilpisjärvi.

Finland’s Embassy in Oslo tells its citizens in a tweet they cannot enter “if you are not working or living in Norway or have another valid reason to enter the country.”

The Finnish Embassy points to Norway’s new law regulations that were adopted on Sunday in an extraordinary session by the government at the King in Council.

Chief of Police in Finnmark, Ellen Katrine Hætta, says persons will be checked at the border, starting from 8 am Monday.

In Norway, the police are in charge of immigration- and border control.

Hætta adds that Norwegians driving to Finland have to be prepared to enter the obligatory 2-weeks quarantine upon return to Norway. Most municipalities in Finnmark region have decided to quarantine everyone that arrives from southern Norway or abroad.

That will most likely put an end to the cross-border shopping on the Norwegian-EU border.

“It is essential that we do not import additional infection risk from other countries. The Government will ensure, however, that Norwegians who are now abroad and people who live or work in Norway can still enter the country,” said Norwegian Minister of Justice and Public Security Monica Mæland.

Exemptions will also be provided for EEA citizens’ family members who reside in Norway.

The same rules will imply to Norway’s land borders to Sweden, at all airports and harbors.

Mæland added that “a package of border control measures is on the way for which implementation authority already exists, including the reintroduction of internal border controls and a request for assistance from the health service to the police.”

Since there is no railway to the northernmost part of Norway, most food and goods are transported by trucks and the best and shortest roads from southern Norway to the northern regions go through Sweden and Finland.

Minister Mæland, though, said “there any reason to hoard goods. Transport and the provision of goods, including crucial products like medicines, will continue.”

Norwegians entering home across the borders from Sweden or Finland will, like from all other countries, have to be quarantined for two weeks.