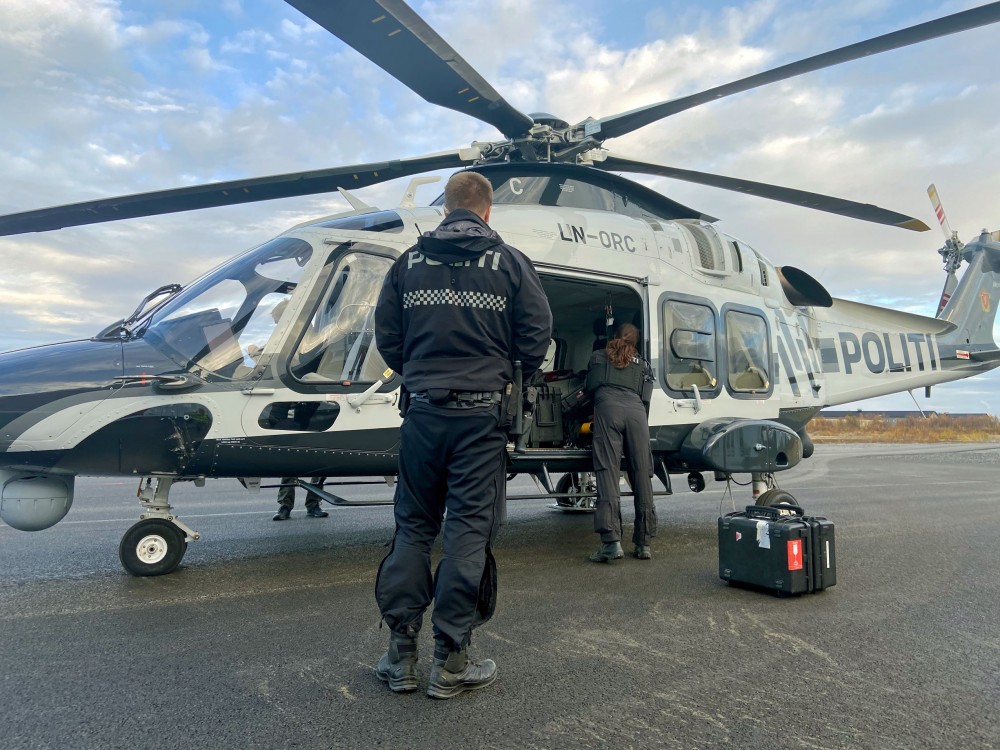 A police helicopter from Oslo, with high definition infrared camera, landed at Kirkenes on Friday evening and will soon start patrolling the 198 kilometers border with Russia. Photo: Thomas Nilsen

It is starting to get cold in northernmost Norway and illegal border crossings in the wilderness could be dangerous. A police helicopter was Friday sent north from Oslo to patrol the border.
Read in Russian | Читать по-русски
By

“If Russia closes the border, we have to be prepared for people trying to cross the border in the terrain. That is illegal, but we do also have in mind the human aspect, peoples’ health and safety,” says Chief of Staff with the Police in Finnmark, Tarjei Sirma-Tellefsen.

This is the first time Norway’s border with Russia get a police helicopter to assist the surveillance.

Equipped with modern sensors like the infrared camera, the helicopter will be eyes in the air along the borderline that stretches from Finland in the south to the coast of the Barents Sea in the north.

“Frost is coming and we could risk that people that are not used to being out in the nature up north would take risks they can’t cope with,” says Sirma-Tellefsen.

He underlines that it is what happens on the Russian side of the border that determines what responses Norwegian border authorities have to take.

Since dictator Vladimir Putin announced mobilization on September 21, hundreds of military-age men have traveled crossed the border at Storskog, the checkpoint on the road between Murmansk and Kirkenes.

Many of the men speaking with the Barents Observer said it is a big fear that leaving Russia would be announced illegal and exit routes closed.

If that happens, a scenario with men starting to walk the wilderness to get to Norway will become much more realistic.

From midnight to Friday, Finland partly closed entry for Russians traveling with a Schengen tourist visa. Estonia, Latvia, Lithuania and Poland closed their borders to Russian tourists two weeks ago.

The Norwegian Government announced on Friday it is ready to tighten measures in the same way as Finland is doing, but will wait because traffic is still not very high.

“We will close the border fast if that becomes necessary,” said Minister of Justice and Public Security Emilie Enger Mehl.

“The police is in control of the situation at Storskog, and we are now increasing the police presence in the border area also outside the border station. A police helicopter is a useful tool for monitoring the border from the Norwegian side of the border,” Emilie Enger Mehl said in a statement.

Unlike other Schengen countries, Norway has military guards patrolling the terrain along the border with Russia. It is, however, the police that is in charge and the soldiers’ job is to monitor and detain possible illegal cross-border runners until the police arrive.

“We are prepared for different scenarios and our cooperation with the Garrison of Sør-Varanger (GSV) is close and good,” Tarjei Sirma-Tellefsen explains.

The police in Finnmark have coordinated plans with the Finnish Border Guards who also have raised preparedness due to the dramatic developments in Russia. Both Norway and Finland are Schengen members and participate in Frontex, the European Union’s coordination agency for external border controls.

Depending on the situation, the newly arrived police helicopter can enter Finnish airspace south in the Pasvik valley, where the two countries have a land border with Russia.

Minister Emilie Enger Mehl assures the government is in close dialogue with the police and Customs in regards to the situation on the border.

“We will perform thorough border controls of all arrivals,” she makes clear.

The Norwegian Government tightened its visa rules for Russians in May, and tourist visas generally have not been granted to Russians since then.