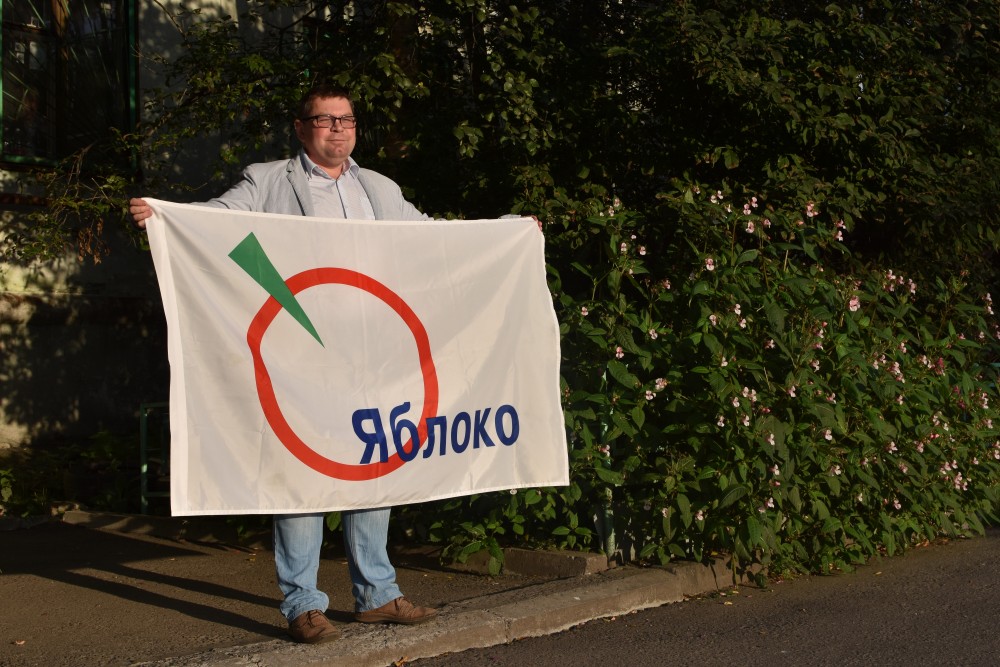 Oleg Drozdov is candidate to the Duma for the Yabloko party. Photo: Thomas Nilsen

Oleg Drozdov with the Yabloko Party in Murmansk runs for a seat in the State Duma, but is not allowed to do street campaigning, gets limited media coverage and zero access to the closed military towns where nearly 100.000 voters live.
By

In its final report, the OSCE describes the contest as “slanted in favor of the ruling party.”  Edinaya Rossiya took 49 percent of the votes and got nearly 53 percent of seats in the State Duma, the lower house of Russia’s Federal Assembly.

Hundreds of thousands participated in demonstrations, mainly in Moscow and St. Petersburg, after reports of election fraud. The demonstrations, however, faded away as riot police stopped the protesters. Many were arrested and in the aftermath, new laws on public protests and media publications have been introduced.

“Today, we are not allowed to arrange for a stand with flyers anywhere in the streets here in Murmansk,” says Oleg Drozdov (46).

Representing the Yabloko party, he runs for a seat in the State Duma as single mandate constituency candidate. In addition, Drozdov is also up for elections to the regional Duma in Murmansk. Yabloko is branding itself as Russia’s only real democratic opposition party.

“Murmansk legislation forbids pickets and public political agitation in the streets,” explains Oleg Drozdov. “We tried to challenge the ban, but the court wouldn’t even consider the case.”

He meets with the Barents Observer at Yabloko’s apartment style office, where campaign materials and posters are made ready. Elections to the State Duma is September 18th. Simultaneously, Murmansk voters will choose who should take the seats in the regional Duma.

“Our party disagree to the situation that exist in Russia,” Oleg Drozdov answers when asked to explain the difference between Yabloko’s program and other parties running for seats in the State Duma. He elaborates: “Power today has been divided between those who have 99 percent of the wealth in Russia. Our slogan for the elections is Don’t lie, don’t steal.”

“The Government make it look like stealing is normal practice all over the world.”

In 2011, Yabloko got 4,7 percent of the votes in Murmansk. More votes to the party were only counted in Moscow and St. Petersburg and the regions of Karelia, Yaroslav, Pskov and Kaliningrad. Edinaya Rossiya got 32 percent in Murmansk Oblast, only half of the average 63,9 percent among the 83 federal subjects and lowest in Russia after Arkhangelsk Oblast and Yaroslav Oblast.

Most famous result for the ruling party was Chechnya with 99,48 percent of all votes.

Yabloko is the only Russian party that has announced its candidate, Grigory Yavlinsky, to challenge Vladimir Putin for the 2018 presidential elections.

Oleg Drozdov paints a grim picture of the opposition’s possibilities to get a fair and equal treatment in the on-going election campaign.

«Compared with the 2011 elections, the Government has created new rules that restricts the rights of parties. They have control of the media and public campaigning. We have no funding to buy big posters to place along the streets like Edinaya Rossiya has,» he tells and continue to explain how the ruling party gets attention.

“If I rent a room and announce a political meeting, nobody will come. While Governor Marina Kovtun or City Mayor Alexey Veller, representing President Putin, can turn up at any big meetings and promote Edinaya Rossiya. Of course then don’t name it elections campaign, but everybody understands that it is so.”

Veller, who have served as Mayor in Murmansk for the last six years is also a candidate to the State Duma.

Yabloko faces a special challenge in the Murmansk region. Oleg Drozdov and others have no access to the military towns on the Kola Peninsula where specific authorization is required to visit. In total, some 120.000 inhabitants live in towns like Severomorsk, Aleksandrovsk, Gremikha, Snezhnogorsk, Vidyayevo, Zaozyorsk and Olenogorsk-2.

“Authorities don’t give us permission to visit such closed towns. Therefore, we have no knowledge about what happens with elections campaign,” says Drozdov. He fears campaigning is not fair, and that results can be manipulated.

«If I get good results in some districts of the Murmansk region, they can turn down my percentage in the closed areas, so the final result will be lower. We are sure it will happen, but it will be hard to get evidence. If we find proofs, we will take it to court, but you know; a small district court can’t change the larger results,» Drozdov says rhetorically.

He believes there are close links between the ruling party and arms industry.

«Companies sponsoring Edinaya Rossiya get contracts with the military. There are no transparency into the accountings. It happens outside the law,» the outspoken candidate claims.

A survey made by the Levada Centre in August tells that 35 percent of the respondents do not trust the system of the Central Election Commission. 23 percent say they are ready to sell their vote for cash.

For the up-coming elections, OSCE sends a delegation of 60 long-term observers that are already on-site and another 400 short-term to observe voting, counting and the tabulation of results. Former Norwegian Foreign Minister Jan Petersen heads the delegation. The Parliamentary Assembly of the Commonwealth of Independent States (CIS) will also send observers.

Russian law gives all parties and candidates equal rights to be voiced in mass media during pre-elections time.

“I get three articles in regional newspapers, like this one,” Oleg Drozdov says and shows the front-cover of Murmansk region’s official newspaper Murmanski Vestnik. “Then I have two minutes, two times in radio and four minutes for two times on TV. But, everyone knows that two minutes on TV is not at all enough to explain our program for the viewers.”

“Kovtun and Veller are on TV all the time. They get coverage of whatever they do, and people get the impression that if they support the president, they should vote for a representative from Edinaya Rossiya,” Drozdov argues.

Social media, however, is a platform not controlled by authorities and actively in use by Yabloko, both in Murmansk and on the national level.

«We want to cut salaries to deputies in the regional Duma by at least 30 percent. Secondly, we consider the annexation of Crimea as unlawful. Main priority in Russia’s foreign policy should be to make friends, first of all with our European neighbors,» Oleg Drozdov concludes.

If he, as a opposition politicians, has any reasons to be afraid?

«At the present time I have no such fear. It is the Government that should have fear. They should be afraid,» Drozdov says with confidence.

«The present Government reminds me about the situation in 1991. Nobody was afraid of the Government at that time.»