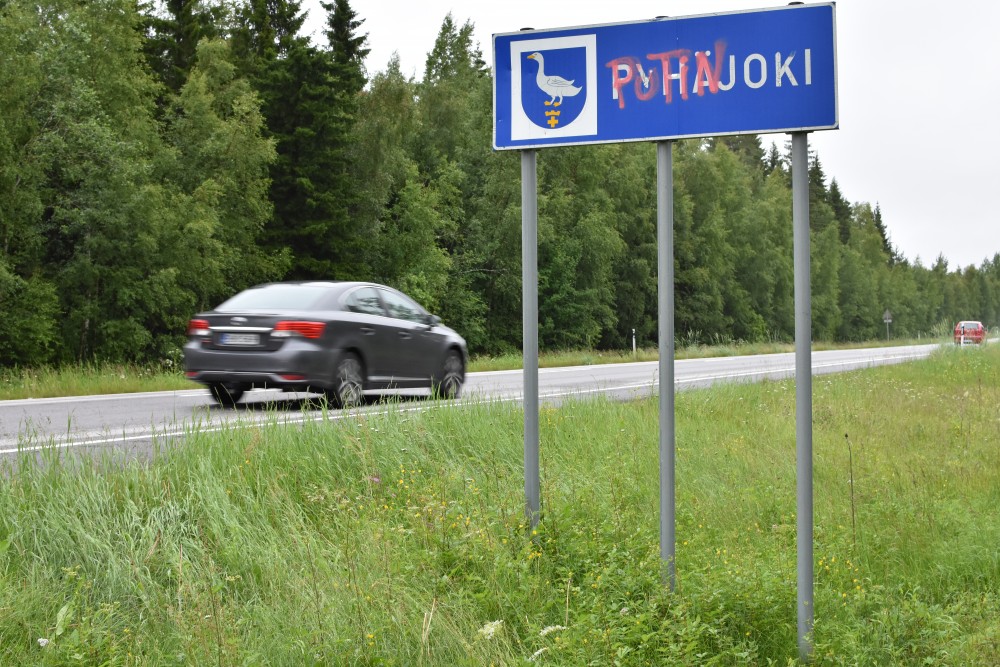 Last summer, someone painted over the sign to Pyhäjoki, renaming the location "Putinjoki" - Russia's involvement in the new nuclear power plant is controversial in Finland. Photo: Thomas Nilsen

Russia’s first operational AES-2006 giga-reactor had a generator failure less three months after it was connected to the grid.
Read in Russian | Читать по-русски
By

The AES-2006 is Rosatom’s flagship reactor to be commissioned at Hanhikivi nuclear power plant in Pyäjoki south of Oulu in northern Finland.

The first reactor of the type is at Novovoronezh nuclear power plant (NPP) in southern Russia. First connected to the grid on August 4th this year, the reactor was running at full capacity by October 26th, Rossiyskaya Gazeta reports.

Department of public relations at Novovoronezh NPP writes in a news-release that the shut-down was caused by a short circuit in the electric generator connected to the reactor.

RAOS Project Oy, the subsidiary of Rosatom set up to supply Fennovoima’s Pyhäjoki reactor, writes about the reactor type: «They are absolutely safe in operation and fully meet the IAEA’s post-Fukushima requirements.» The AES-2006 (VVER-1200) is fourth generation Russian designed pressure-water reactors.

VVER-1200 reactors are currently under construction both with a second one at Novovoronezh NPP but also with one unit at Belarusian NPP in Belarus. The reactor type is ordered to Turkey, Hungary and Bangladesh in addition to the one in northern Finland.

Meanwhile, 13 municipalities in northern Sweden have written a letter of concern to the Finnish Government. The municipalities are worried about both getting a nuclear power plant as neighbor across the Bothnia bay and about possible plans for storing nuclear waste in the area, reports the regional newspaper NSD.se.

In a statement from earlier this month, the municipality of Umeå expresses concern about locating the final repository for spent nuclear fuel near Pyhäjoki. The distance across the Bothnia from Pyhäjoki to Umeå is 200 km, and the municipality says they can’t recommend such location.

Umeå is the largest city in northern Sweden.