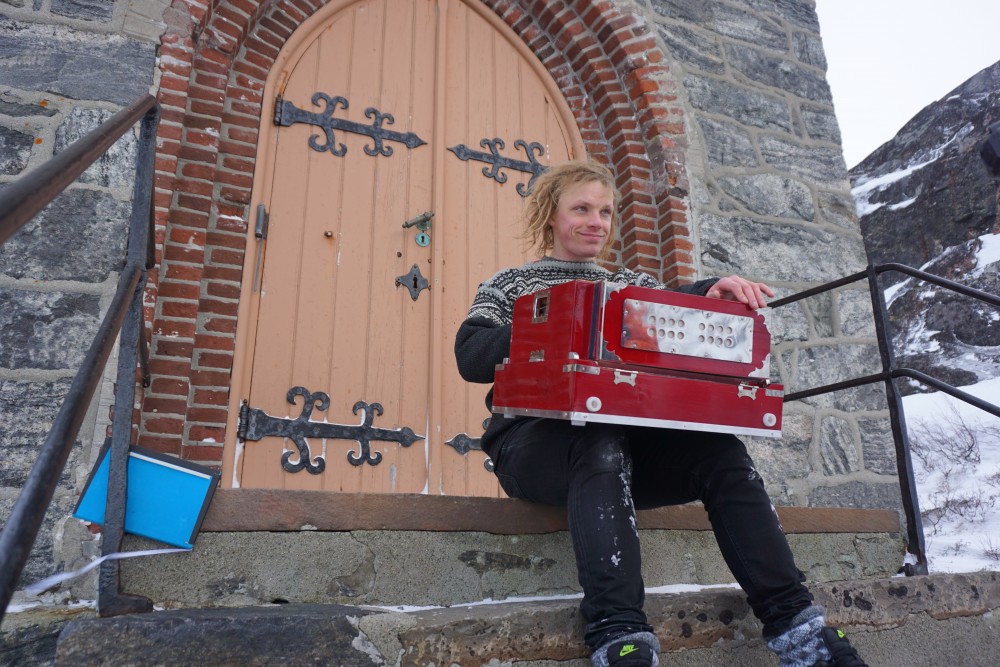 Norwegian folk musician Moddi will preform banned or censored songs from around the world, but removes his version of Pussy Riot’s controversial Punk Prayer from the play-list.
Read in Russian | Читать по-русски
By

Has the Kremlin been meddling with a literature festival in Finnmark, Norway’s northernmost county on the border to Russia?

The organizers confirm that Russia’s Consulate General in Kirkenes has expressed worry about the performing of Pussy Riot’s Punk Prayer at the sold-out concert to take place at RITZ on Thursday.

Moddi is touring to promote UnSongs, his latest single album of 12 songs from around the world that have, at one stage, been banned, censored or silenced.

The most famous song is his version of Pussy Riot’s Punk Prayer.

“The purpose of album is to show that music can’t be stopped. A good melody contains so much power that it is impossible to hold it back. No wonder powerful men are afraid of music. It has an ability to disseminate messages that would otherwise be silenced. With twenty-two men on the stage, it will anyway take a lot to stop us.”

So reads the Facebook event text for Moddi’s Kirkenes-concert on Thursday, posted under the headline “Banned songs in magnificent Norwegian-Russian cooperation.”

Arkhangelsk Chamber Orchestra is joining Moddi at the concerts in Oslo and Northern Norway now in November.

Performing Punk Prayer before the altar in Christ the Savior Cathedral in Moscow in 2012 got two of the Pussy Riot’s members sentenced to two years in penal colony for hooliganism motivated by religious hatred. A third was released from prison shortly after the trial, while the last two members assumed to have taken part in the performance fled the country shortly after.

Moddi’s version of the song is not at all punk, but a slow, passionate hymn performed with likely the best, bell-clear voice you can hear in Norway today.

It was Nordlys that first reported about the controversial Russian song being removed from the play-list at the concerts Moddi has togheter with Arkhangelsk Chamber Orchestra.

“I bear Punk Prayer with me”

Moddi confirms to the Barents Observer that Punk Prayer is taken off the song-list for the concert in Kirkenes, Norway’s border town to Russia in the north.

“We Norwegians are fantastic privileged and can mostly sing whatever we want. When the songs are performed in an international context I am responsible not only for myself, but for everyone involved. I bear Punk Prayer with me and look forward to play it in the future. Beyond that I can – sadly – not comment any further at this time,” Pål Moddi Knutsen explains.

“It was a contact with one of our cooperation partners outside the County Administration,” Sunniva Knutsen says in an email to the Barents Observer.

“It was expressed concern on how the Chamber Orchestra would be meet in Russia if they performed this song,” she says.

Sunniva Knutsen, however, underlines that UnSongs by the organizers is considered an important project and that Moddi is most welcome to perform the song.

Russia’s Consulate General in Kirkenes has not replied to questions about the case from the Barents Observer.

Arkhangelsk Chamber Orchestra has toured northern Norway together with Moddi since November 5. The tour is financed with a 370,000 kroner (€41,000) Norwegian Barents project grant.

Kirkenes is the last of six concerts the Russian orchestra plays with Moddi.

In the video-story below from March this year, Moddi tells about the music video he made of Punk Prayer at the church steps of King Oscar II’s chapel in Grense Jakobselv.