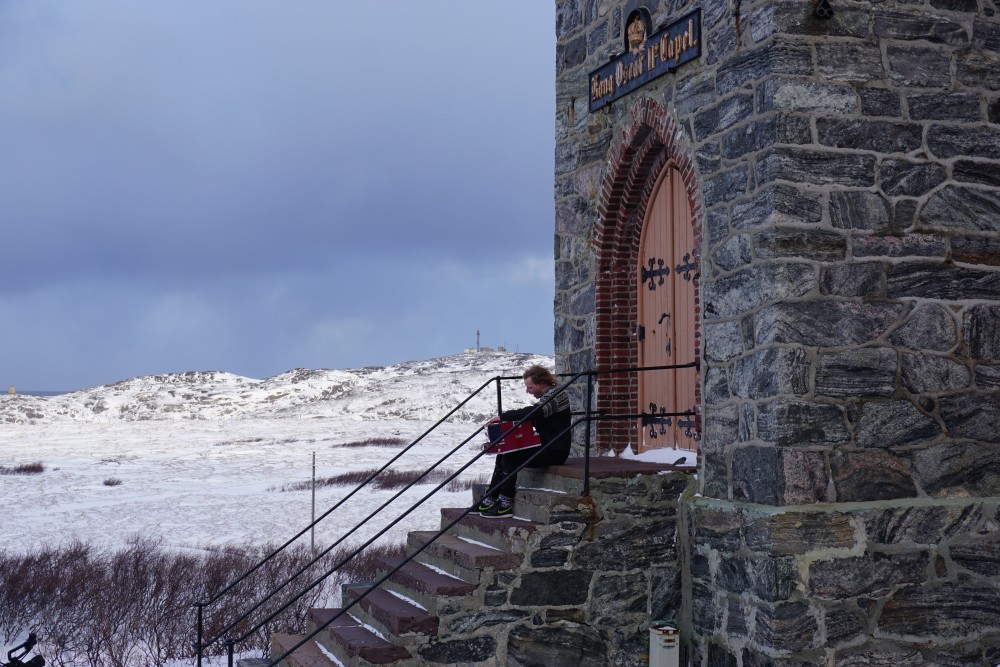 In March, Moddi played "Punk Prayer" on the church steps in Grense Jakobselv, a few hundred metres from Norway's border to Russia on the Barents Sea coast. Photo: Thomas Nilsen

“Our goal was to avoid consequences for the orchestra and for Norwegian-Russian cultural relations,” Russia’s Consulate General says.
Read in Russian | Читать по-русски
By

Russia’s Consulate General confirms to the Barents Observer that they warned a group of Russian musicians against playing “Punk Prayer” at concerts in Kirkenes, Norway’s border town to Russia in the north.

The concert takes place on Thursday.

“Mr. Pål “Moddi” Knutsen has the right to decide himself what songs he wish to play or sing. However, we contacted the organizers of the festival locally to make sure the musicians from Arkhangelsk Chamber Orchestra were told about the activity they participate in,” Russia’s Consulate General writes in an email.

Arkhangelsk State Chamber Orchestra and the Norwegian singer Moddi are currently on tour in northern Norway to promote UnSongs, Moddi’s latest album of 12 songs from around the world that have, at one stage, been banned, censored or silenced.

Then, suddenly, Moddi decided to remove his version of Pussy Riot’s “Punk Prayer” from the play-list.

Explaining why the Russian musicians should not perform the well-known song by feminist group Pussy Riot, the Consulate General writes: “In 2013, the video with the so-called “Punk Prayer” was included to the Federal list of extremist material by a court decision. The decision applies to both video and sound that are insulting believers. That means the players in the orchestra could formally violate Russian legislation by assisting such performance.”

“Our only goal was to avoid possible consequences for the orchestra and for Norwegian-Russian cultural relations,” the email from the Russian diplomatic mission reads.

The bill, which criminalizes insulting people’s religious feelings, was approved by the State Duma in 2013. The law is controversial in Russia because it contradicts the basic principles of a free and secular state and the freedom of expression provided by the Russian constitution and Russia’s obligations as a member of the Council of Europe.

Well known human rights lawyer Ivan Pavlov from St. Petersburg says to the Barents Observer that performing Pussy Riot’s “Punk Prayer” in Norway would be a complicated juridical question to deal with.

“They can get nothing or they could be sentenced for violating article 282 in the Criminal Code of the Russian Federation. There are no clear consequences,” Ivan Pavlov says.

“Violating article 282 gives maximum six years in prison,” he says and answers a clear “yes” to the question about Russian citizens performing in Norway, outside Russia’s borders, would equally be considered a violation of the law.

In June this year, the amendments was made to the bill, including increasing the maximum punishment for violations to a maximum of six years in jail.

The bill was strongly backed by the Russian Orthodox Church and came after three of Pussy Riot’s band members were sentenced to two years in prison each for aggravated hooliganism after the appearance before the altar in Moscow’s Christ the Savior Cathedral. One of the three was soon released after the trial. Three others fled the country.

In Kirkenes, Russia’s Consulate General expresses surprise that “Punk Prayer” was supposed to be included in the concert in Kirkenes.

“Meanwhile, we are surprised that the song was included in the international literature festival where top-politicians that are developing people-to-people contacts along the Norwegian-Russian border are participating.”

Some hours before Thursday’s concert, a debate takes place as part of Finnmark International Literature festival where the topic for discussion is challenges in the border cooperation, How does today’s political climate effect our cooperation with Russia? Among the panelists is Thorvald Stoltenberg, Norway’s former Foreign Minister who initiated the Barents cooperation back in 1993.

“To our knowledge, inspiring protest actions against authorities in another country is not covered by the Kirkenes Declaration and it is doubtful that “Punk Prayer” can be considered a “business-card” of the Barents Cooperation,” the Consulate General writes in the email to the Barents Observer.

“It is not possible to imaging that any song or political pamphlet insulting the King of Norway, the Prime Minister or Parliament as well as religion or culture could be included in the program at a festival in Murmansk or Arkhangelsk,” the statement continues.

“Fortunate, this is something many Norwegians in the region understand, like the parish in Sør-Varanger that refused Mr. Knutsen [Moddi] singing “Punk Prayer” in King Oscar’s chapel earlier.”

As reported by the Barents Observer in March, Moddi recorded his version of “Punk Prayer” on the church steps at the chapel in Grense Jakobselv after being denied inside. See video-story below.

The Facebook event-page for Moddi’s concert in Kirkenes says music can’t be stopped. “The purpose of album is to show that music can’t be stopped. A good melody contains so much power that it is impossible to hold it back. No wonder powerful men are afraid of music. It has an ability to disseminate messages that would otherwise be silenced. With twenty-two men on the stage, it will anyway take a lot to stop us.”