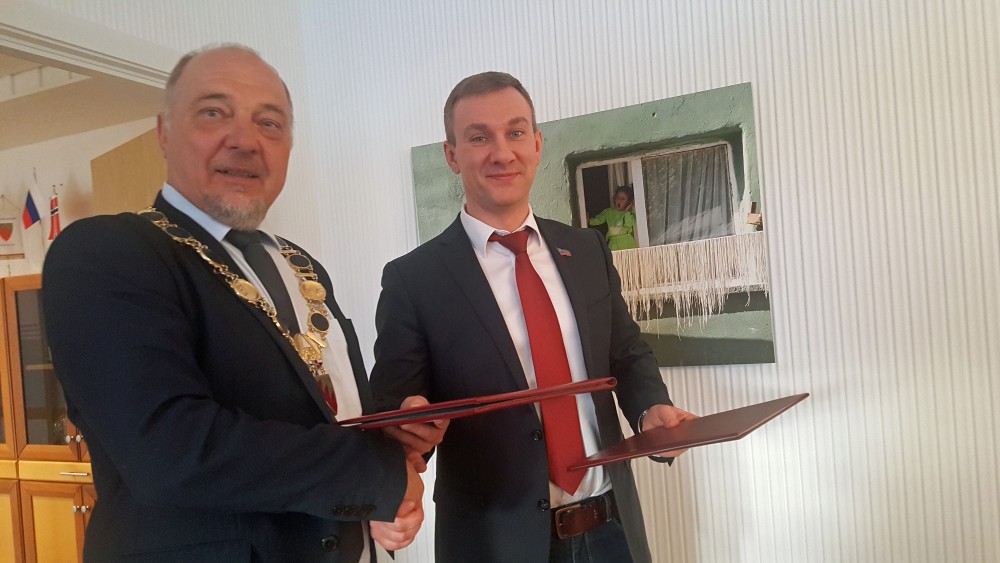 "I don't think there are any cities we have more contact with than Murmansk," says Kirkenes Mayor Rune Rafaelsen.
Read in Russian | Читать по-русски
By

Murmansk’s new Mayor, Dmitry Filippov, visited Norway’s border town Kirkenes this week. He was not alone. Every week, thousands of Russians cross the border to Norway in the north, mainly for shopping in Kirkenes. And most are from Murmansk, Russia’s largest city above the Arctic circle.

For people in Kirkenes, living more than 2,000 kilometer north of the capital Oslo, Murmansk is the nearest larger city with a wide range of cultural activities, businesses, restaurants and night-life.

Cross-border travel has become much easier in recent years. Following a meeting between the two countries foreign ministers in Kirkenes in 2008, work on upgrading the bumpy road separating the people started.

Today, European Highway E105 is of such good standard that it only takes you some three hours to drive from Kirkenes to downtown Murmansk. Maybe half an hour more when the roads are snowy.

At Mayor Rune Rafaelsen’s office, the first letter of intention for cooperation between Kirkenes and Murmansk was signed by the two Mayors. The goal is to find mutual beneficial ways for cooperation. Listed is business, tourism, health-care, culture, trade, sports and education.

Maybe one day the two cities will sign a formal sister-city agreement.

«I don’t think there are any cities we have more contact with than Murmansk,» the Kirkenes Mayor told his Murmansk colleague Dmitry Filippov.

«We have established a new tourist information centre at the ground floor of Hotel Arktika [downtown Murmansk]. I suggest we could provide information about Kirkenes as well at the centre,» Dmitry Filippov said and wondered if Kirkenes could do the same and provide visiting tourists with information about Murmansk.

Winter tourism is one of the fastest growing businesses in Kirkenes. Also Murmansk sees a sharp increase in numbers of Asian tourists coming to experience winter and northern lights.

East-west tensions and the cold political winds between Oslo and Moscow was not mentioned with a single word at the meeting between the two Mayors.

Everyday life goes on in the high north.