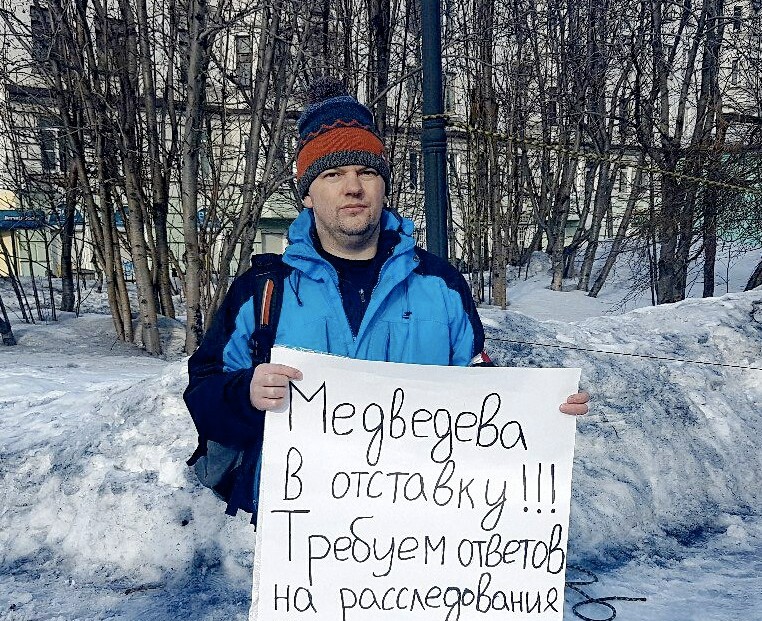 "Medvedev should resign (be impeached) and we are asking for real answers from the anti-corruption investigation", says the poster made by Sergey Ivanov. Photo: Bloger51

Following the recent anti-corruption rally in Murmansk, self-made political activist Sergei Ivanov was fired from his job at the Murmansk airport. He was an airport baggage handler. He is 38 years old and has two children.
By

The problem started when Sergei saw the film about Prime Minister Dmitry Medvedev “He is not Dima to you” («Он вам не Димон»). The basic idea of this film had appeared three weeks before in the newspaper “Cobesednik” and Sergei, motivated by righteous idealism, decided to do something a little brave and, after liking, sharing and reposting the newspaper article, he suddenly found himself becoming an anti-corruption organizer in Murmansk.

This “organizer” role included asking for (and being denied) a permit for a meeting to discuss the film and becoming an administrator of a VK group and writing the placard depicted in the photo.

But other than this, what exactly has happened as a result of Sergei’s bravado? Most of all, Sergei’s appearance has made local law enforcement personnel really happy. They have here what they consider to be a perfect new fuel to keep the bureaucratic machine moving. Thanks to Sergei, they have had the chance to practice conducting operational activities, they have been able to make surveys, they have officially and bureaucratically been able to declare the existence of a crime, they have produced official reports and basically, they have been able to justify the existence of a certain number of employees. Thank god for Sergei’s revolution; you just can’t make this stuff up. “Look”, they can say with a smile, “Here is my work”.

But in the end, the real result was only that Sergei lost his job.

And I can relate to this man’s situation. I myself (blogger51), am under a criminal investigation initiated by the governor and have turned to a dozen human rights and legal organizations for help and relief.  From half of them, I have not received any answer and from the other half, I have been offered a most reassuring collection of “Everything is ok, we are monitoring your case” replies and this is about it. I cannot not even get recommendations on how to write questions from linguistic experts. Probably everyone has been very busy. Either this or it is simply that the benefits of a little PR-smoke should not be expected by anyone outside of Moscow – to them, the adventures of ‘one measly provincial loser’ is probably not all that interesting.

And this is the main problem with most human rights movements and opposition politicians. They always ask for help and support (money and attention) but whether or not they can help themselves (or anybody) is another question altogether.

Will Sergey Ivanov be provided with any support from the Anti-corruption Fund, the lawyers there or Alexey Navalny himself with a word or some help with appeals? Or will it turn out to be another of those cases where we have to do everything ourselves here in the bunker. All any of us ever hear from the organizations is that we should hold on, try to be as optimistic as possible, stay in a good mood and be healthy. Or maybe the government is right and maybe baggage handler Sergey Ivanov knew what he was doing, boldly creating his VKontakt group and drawing up his poster. What did he think would happen? What’s there to be surprised about?