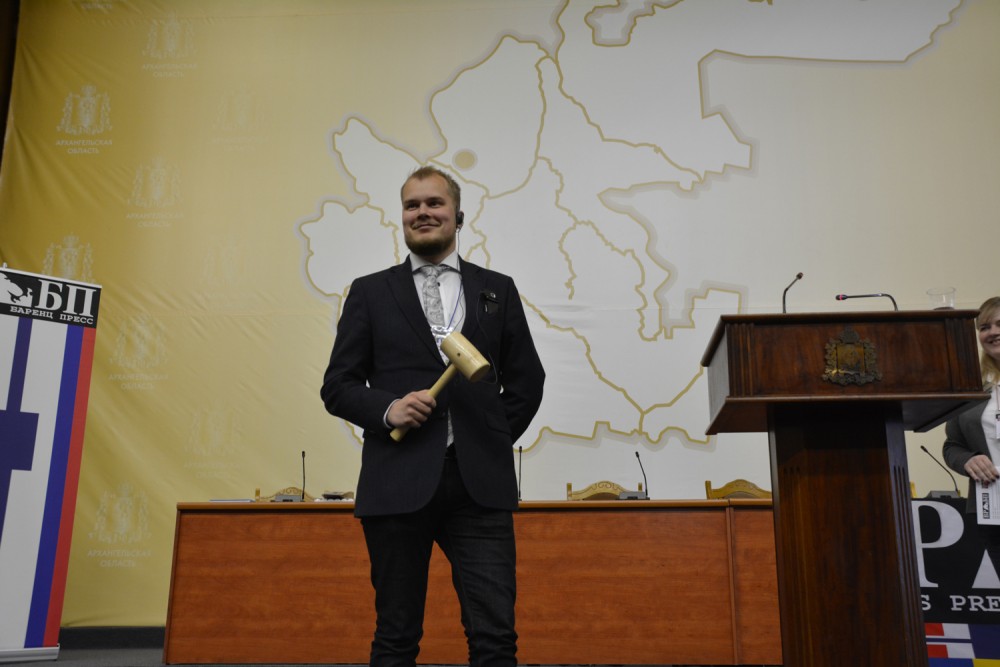 Cooperation between journalists in the Barents Region is more important than ever, says Tim Andersson as he takes over the chair of the international network board.
Read in Russian | Читать по-русски
By

As if an illustration of ruling trends in regional journalism, this year’s Barents Press annual meeting took place in the premises of the Arkhangelsk government and in the presence of regional Governor Igor Orlov.

«There is no government pressure against mass media in Arkhangelsk», Orlov underlined in his opening speech.

The regional leader generously commented on questions about the state of affairs in his northern Russian region. According to Orlov, a number of new regional media outlets have opened in the course of his five years in power. «And I cannot remember that a single one has closed», he said.

The words of the governor were left uncontested, although a nearby representative of a regional outlet uncomfortably rolled her eyes.

It was the 22nd annual meeting of the cross-border network, which includes journalists from northern Finland, Norway, Russia and Sweden. And it was held at a time of mounting focus on the media’s role in current troublesome east-west relations.

Few weeks before the meeting, longtime network participant and Barents Observer Editor Thomas Nilsen became the first ever Nordic journalist to be put on one of Russia’s so-called stop-lists of unwanted individuals.

In a statement presented during the annual meeting, the Barents Press International board says it «deeply regrets that governments in the Barents region prevent journalists to freely travel and report from any of the countries in the region», and that travel bans «damages not only access to independent information, but also increases risks of speculations and distribution of false information and biased reporting».

However, more than focusing on negative trends, this year’s meeting was about announcing big decisions aimed at making the network stand stronger.

According to Tim Andersson, new chair of Barents Press International, several organisational measures are now in the pipeline.

Among them is the elaboration of a document meant to regulate key principles and values on which the network is to follow, he says to the Barents Observer.

«I think this document will not be used to exclude anyone, but it can help us keep together and strengthen our common identity.»

Andersson also confirmed that a major project grant application will soon be sent to the Swedish Ministry of Foreign Affairs. That will include Nordic-Russian joint training programs and exchange trips.

Also Barents Press Norway, the Norwegian branch of the network, aims for reform. The Norwegian network journalists will from now on be members of a registered organisation, and not like previously loosely connected participants in events.

«With this, we take a big step into the future», Amund Trellevik, leader of Barents Press Norway said.

The measure, which is to help shape up management procedures, follows a similar model applied by the Swedes.

«It is unacceptable that journalists are put on sanction lists as part of a big political game», Trellevik stressed in his speech delivered in the event. «But there are also other challenges with regard to media, media freedom and free and independent coverage of countries, people and cases», he continued and lashed out against the press in his own country.

«We must be honest and admit that the Norwegian media coverage of Russia tends to be biased, omissive and full of stereotypes», he underlined.

The self-critic statement comes as Norway is heralded as the world leader in press freedom. This year’s Press Freedom Index, the annual study elaborated by organisation Reporters without Borders, puts Norway on top ahead of neighbours Sweden and Finland.

Russia, meanwhile, continues to struggle with a bad score. In its description of the country, the Reporters without Borders writes that «the oppressive climate at the national level encourages powerful provincial officials far from Moscow to crack down even harder on their media critics». The index ranks Russia as number 148 of 180 countries.

The Barents Press was established in the early 1990s and today considered one of the most successful non-governmental collaborative initiatives in the region. It includes four countries; Finland, Norway, Russia and Sweden and is governed by an international board in addition to four national boards.