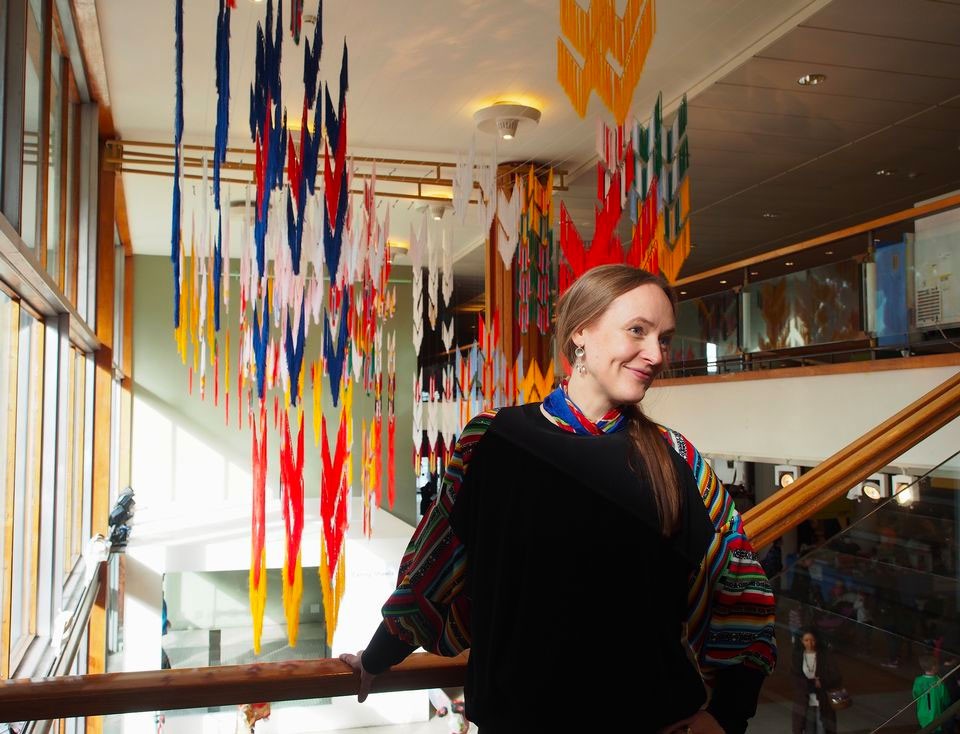 The renown artist wins prestigious prize from the Fine Arts Academy of Finland.
Read in Russian | Читать по-русски
By

“It’s a great honour to be awarded one of the biggest fine arts prizes in Finland,” Pieski rejoices.

The Sámi artist was awarded the prize of the Fine Arts Academy of Finland in a ceremony on 30 May. The prize award was made at EMMA, the museum of modern arts in Espoo, Finland.

For the happy Pieski, getting the prize is a great honour.

Important reasons for granting the award to Pieski were the special, unique character of her art and her topical style. “I also feel that they have wanted to spotlight Sámi visual culture in connection with this prize,” Pieski says.

The prize: a solo exhibition and money

”The awarded artist can have a big exhibition here at EMMA the next year, and that is, of course, an exciting and great opportunity. Here, I can display some of my large installations too,” Pieski says.

The prize is awarded every second year – and now for the third time. This year, the other candidates for the prize were artists Jani Ruscica and Emma Rönnholm.

Colours, forms and techniques from the Sámi handicraft tradition

The Fine Arts Academy bases its decision on how beautifully Pieski tells about things through art, spotlighting matters connected with a minority culture; this she does by playing with colours, forms and techniques that rise from the handicraft tradition of the Sámi. Pieski’s art also contains references to the light and the landscape of the North.

According to the jury, Pieski has the remarkable skill to create a unique exhibition at the Espoo Museum of Modern Art which will invite people to immerse themselves into the special world shaped by her.

The artist’s works include large installations but also paintings. Her art was displayed, for example, at the Lux Helsinki exhibition in January 2017 and is shown in the Nordic Matters exhibition at Southbank Centre in London throughout this year.

The jury of the Fine Arts Academy of Finland consisted of Antti Linnovaara (Chair of the Academy), Pilvi Kalhama (Museum Director of EMMA), Anitta Ruotsalainen (an artist), and Mauri Ylä-Kotola (Rector of the University of Lapland).