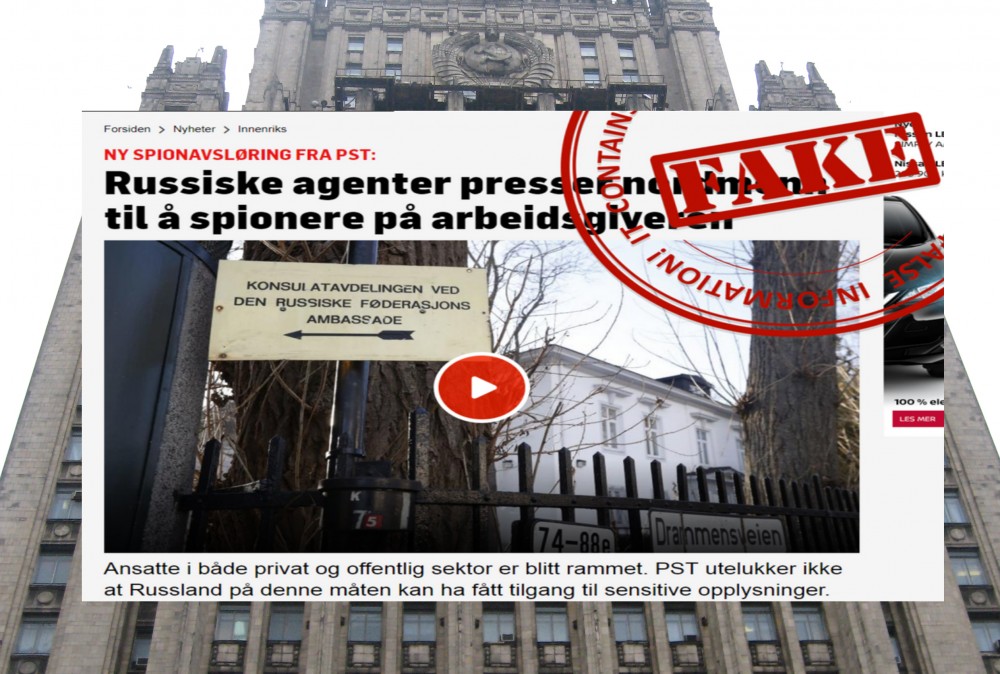 Report about how Russian agents operate triggers «Fake News» stamp by the Foreign Ministry in Moscow.
Read in Russian | Читать по-русски
By

Interviewed by TV2 news in late September, Chief of Norway’s Security Police, Benedicte Bjørnland, said there are several examples lately where Russian intelligence puts pressure on Norwegians to spy on their own employer.

«We have got reports of several cases about people who originally have an affiliation to Russia. It might be that they have previously lived in Russia or have Russian spouses. And where pressure have been used to have them to collect or report from the place they are working,» Bjørnland said in the the interview.

She says the examples are from both private and public sector. Benedicte Bjørnland told that it can’t be ruled out that such pressure in some cases have succeeded.

The news report was obviously not well received in Moscow.

«This is yet another attempt to use Western media to incite hatred of our country, this time in neighbouring Norway, the Foreign Ministry states on its portal launched in February aimed to expose fake news written by foreign media.

The text in the strong-worded accusations against TV2 continues: «Deliberate disinformation intended to discredit neighbourly relations between Russia and Norway cannot be considered professional journalism.»

The ministry denies any claims of Russian intelligence services recruiting Norwegians to disclose inside information from their jobs.

«Without any grounds, these journalists are accusing Russian intelligence of compelling Norwegians to spy and report on their employers,» the ministry’s text read.

The accusations against TV2 news is also published on the Facebook profile of the Russian Embassy in Oslo.

«This report will take its rightful place among the third-rate propaganda…,» according to the claims by Moscow.

Speaking on phone with the Barents Observer, Solbrække says «we are of course not engaged in propaganda. TV2 news has made an ordinary report based on good journalistic principles.»

She says TV2 had no hidden sources, it was an interview with the Chief of the Norwegian Security Police.

«The Russian Embassy was given the chance to give a simultaneous reply to the accusations, but didn’t wanted to do so,» Karianne Solbrække says.

The news editor says the fake news accusations is out of proportions.

This is the first time Russia’s Foreign Ministry lists a Norwegian media report as «fake news».